Revenue from antifreeze recycler consumption accounted for around 1%-2% of the global waste management market in 2021.

According to a recent analysis by Fact.MR, a market research and competitive intelligence provider, utilization of antifreeze recyclers experienced a growth rate of 0.3% over the past half-decade. This was due to the severe effect of the COVID-19 pandemic on the global antifreeze recycler machine market. According to the research, the market witnessed a declined growth of -8.6% in 2020.

Furthermore, surging use of ion-exchange-based antifreeze recyclers in the automotive sector at a cost-effective price point is likely to supplement market growth during the assessment period. This segment is estimated to capture 20% of demand by 2023 and gain 131 BPS over the same period. 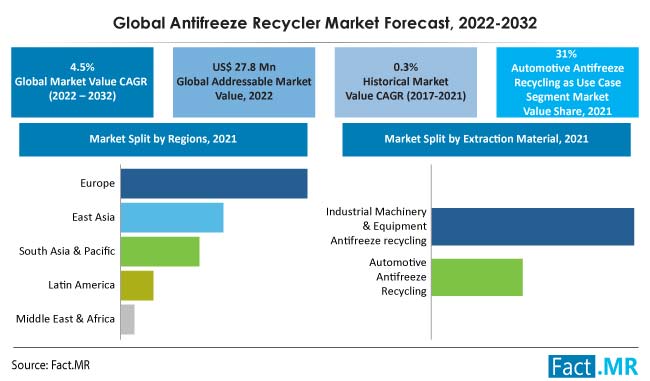 What Road Lies Ahead for Antifreeze Recycling Service Providers?

Heavy machinery and equipment are often utilized for manufacturing purposes in multiple end-use industries such automotive, paper& pulp, petrochemicals, pharmaceuticals, and others. Due to heavy operations and continuous processing, these machineries are likely to liberate extensive heat and experience the issue of overheating, which further impacts their lifespan and other specifications.

To maintain the ideal temperature for smooth operations, there is extensive and repetitive use of antifreeze in the manufacturing sector. Due to highly recyclable properties, ethylene glycol and propylene glycol are used as a raw material in antifreeze. Virgin antifreeze is an expensive commodity that can only be replaced with recycled antifreeze, which is comparatively cost-effective.

Utilization of industrial machinery and automotive cars has been rapidly increasing on a large scale. ASEAN countries such as India, China, Japan, Thailand, Malaysia, and Singapore are witnessing a steep growth rate in the manufacturing and automotive sectors. This growth has given rise to the demand of antifreeze and coolants.

Used antifreeze generation and disposal in sewers, water bodies, and in the ground has also increased in the recent past. Therefore, regional governments have imposed strict rules & regulations and heavy fines for the disposal of antifreeze due to its hazardous impact on the environment.

Based on the Fact.MR study, requirements of the manufacturing sector are highly specific and need to be catered in order to function properly. Customers require a specific type of tank capacity, procedure, and other specifications.

Manufacturers have streamlined their product ranges as per demand to attract more customers towards product utilization. Manufacturers are providing customized products that can specifically cater to the demand of respective clients. Therefore, client-specific customized antifreeze recyclers are driving market growth in an assertive way.

What Do Antifreeze Recycler Suppliers Need to Watch Out For?

“Rising Adoption of EVs to Affect Sales of Antifreeze Recyclers”

One of the potential restraints in the antifreeze recycler market is the high adoption rate of electric vehicles. Since there has been tremendous growth in electric vehicles, internal combustion engine vehicles are facing a huge risk of potential decline.

Additionally, EVs are more economical than internal combustion-based vehicles in the long run. Also, the rate of CO2 emissions from EVs is very low as compared to conventional IC engine-based vehicles.

Leading countries such as the U.S., China, Canada, Germany, Russia, and others are following the trend of electric vehicles. Due to this, sales of IC vehicles are expected to decline in the next half decade, and will directly pose a negative effect on the demand for antifreeze over the assessment period.

Why is the China Antifreeze Recycler Market Growing?

The China antifreeze recycler market is predicted to expand at a CAGR of 4.5% during the forecast period. Increasing number of manufacturers are acquiring control over the market and providing such platforms at comparatively low prices.

How Will Industrial Advancements in the U.S. Benefit Antifreeze Recycler Companies?

The United States has caught significant attention of manufacturers due to large-scale industrialization and urbanization in the country over the historical period. Laws regulating the disposal of antifreeze in the environment are very strict in the country.

According to Fact.MR research, the United States market is estimated to reach a valuation of US$ 14.6 Mn by the end of 2032.

Should Automotive Antifreeze Recycling Be the Focus of Market Participants?

Currently, utilization of antifreeze is comprehensively increasing due to a rise in end-use application in automotive cars. Additionally, sales of passenger vehicles and heavy commercial vehicles are steadily increasing.

Automotive antifreeze recycling use case is estimated to reach a valuation of around US$ 14.5 Mn by the end of 2032.

Therefore, demand for antifreeze recyclers in the automotive industry is set to increase at a CAGR of 5.3% over the forecast period.

Why is Filtration-based Technology Likely to Witness Accelerated Growth?

In reserve osmosis-based technology, the fluid passes through different membranes, and this makes it a more time-consuming and costly process. This will provide a comparatively low growth rate of 3.8% as compare to distillation- based antifreeze recycler and filtration-based technology.

However, demand for more cost-effective and efficient technology-based antifreeze recycler machines is increasing at a rapid pace. This is likely to provide a noteworthy CAGR of 4.4% to the filtration-based segment over the decade.

Filtration-based technology is estimated to hold a market valuation of US$ 7.4 Mn in 2022, and is expected to generate an absolute $ opportunity of US$ 4.3 Mn over the forecast period.

Companies are developing constructive collaborations and partnerships with end-use industries for establishing a strong consumer base. Owing to high recovery rate of the distillation method, market players are able to leverage maintenance, while witnessing consistency in demand.

Market participants are channelizing their resources and capital focusing on the lucrative end uses while trying to expand their customer base. All in all, a blend or organic and inorganic grow strategies is allowing companies to capture a significant market share in this highly competitive market.

The global antifreeze recycler market is likely to reach a valuation of US$ 43.1 Mn by the end of 2032.

Industrial manufacturing as an end-use industry is likely to reach a valuation of around US$ 19.2 Mn in 2022.

North America holds a leading market share of around one-third in 2022, and predicted to remain on the same growth curve through 2032.

Distillation-based recycling technology is expected to experience a CAGR of 4.8% during the forecast period.

Portable antifreeze recyclers are expected to hold a market share of around 70% by 2032.

*328 figures and 70 tables includes by FactMR