Polyisobutylene (PIB) or polyisobutene (C4H8)n is a transparent, synthetic hydrocarbon elastomer made by isobutylene polymerization. Polyisobutylene is a crucial raw material used in the production of a wide variety of products, such as lubricants, tires, adhesives, fuels, sealants, and others.

Polyisobutylene is a versatile material with numerous uses due to its thermal stability, superior flexibility, ozone resistance, oxidation resistance, and impermeability properties. It is also weather-resistant, which increases its demand in the manufacture of construction sealants, hosepipes, pharmaceutical stoppers, and other mechanical products. Polyisobutylene is well-known for its features, such as electrical insulation, and is impermeable to water vapor and gases, making it an excellent choice for sealants in photovoltaic system panels.

This elastomer is widely used in the adhesive and sealant industry to seal and protect electrical wirings, seal joints, and safeguard body cavities from moisture. Polyisobutylene is employed in hot-melt and pressure-sensitive adhesive systems due to its flexibility, tackiness, and low cohesive strength, primarily in PSAs (pressure sensitive adhesives) and hot-melt adhesives.

Automobile is another important end use industry for polyisobutylene.

Polyisobutylene is a synthetic rubber with distinct chemical and physical features. Its gas impermeability and flexibility at low temperatures and moisture make it the perfect material for tubeless tire manufacture.

Moreover, polyisobutylene is largely utilized in the automobile industry to make inner tubes and tires. It is utilized in the inner tubes of car tires, bus tires, airplane tires, and truck tires. Aside from tires, it is employed in this industry in the form fuel additives, lubricants, sealants, and adhesives.

Polyisobutylene is also used to make rubber hoses, mats, and seals. The automobile industry is experiencing an increase in demand for commercial and passenger vehicles for public and private transportation due to the increased population migration to urban regions. Furthermore, the booming e-Commerce and logistics industry is driving the demand for commercial vehicles.

Polyisobutylene is used as an additive in engine fuel to prevent deposits of sludge, soot, and other deposit precursors from accumulating on engine parts. This aspect is predicted to boost the demand for lubricants, thus supporting the growth of polyisobutylene as a lubricant additive during the forecast period.

Why is the Global Polyisobutylene Market Likely to Grow at a Fast Pace?

Polyisobutylene is increasingly being utilized in the construction industry as a sealant for damp proofing, rubber roof repair, and roof membrane repair and maintenance, particularly around the edges of walls. It is critical to have the roof membranes repaired since several fixtures, such as air conditioner vents, plumbing, and pipe joints can cause the roof panels to become loose.

Polyisobutylene is favored in the construction industry due to its resistance to alkalis, oxidation, and acid solutions. It does not react with oxidizing agents such as dichromate, chloride, or potassium permanganate. PIB's elastic characteristics can be maintained at temperatures as low as -67°F.

Which Can Negatively Impact the Sales of Polyisobutylene?

In the sea, polyisobutylene forms a potent adhesive, covering the birds and inhibiting their movement and capacity to feed. Furthermore, a great number of species were washed ashore on beaches near England's south coast after being covered in a sticky substance. These incidents prompted the RSPB (Royal Society for the Protection of Birds) to express concerns about the use of polyisobutylene in the oceans.

These aspects can negatively impact the sales growth of polyisobutylene. 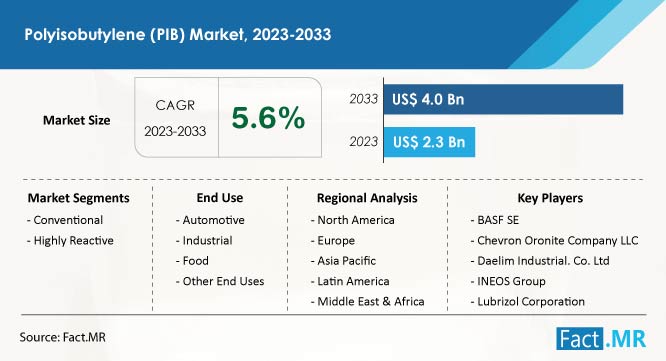 Which Countries are Pushing the Asia Pacific Market to New Heights?

In Asia Pacific, demand for PIB is mainly fueled by high demand from major industries such as construction, automotive, aerospace, and cosmetics in growing economies. Major tire producers in Asia Pacific are producing tubeless tires for quick replacement. Furthermore, the growing trend of transitioning toward electric vehicles is predicted to fuel demand for tubeless tires to reduce maintenance and drag. This is projected to increase the demand for polyisobutylene.

Japan and South Korea are boosting the market growth in Asia Pacific.

What Makes the United States the Largest Contributor to the North American Market?

The North American market is expected to expand rapidly due to the increasing use of polyisobutylene in numerous end-user industries such as marine, automotive, and packaging.

The United States is the largest contributor to the North American market due to increasing infrastructure development in the country.

What is the Demand Outlook for PIB in Germany?

Polyisobutylene-based butyl rubber is increasingly being used in the development of automobile parts such as hosepipes, gaskets, and window strips due to its higher thermal stability, flexibility, and oxidation resistance.

The worldwide market is highly consolidated with a few major players holding most of the share. Key players in the PIB market are investing heavily in research and development activities, especially to develop environmentally friendly products.

Some of the recent developments of key Polyisobutene providers are as follows:

Similarly, recent developments related to companies Polyisobutene Market have been tracked by the team at Fact.MR, which are available in the full report.

The global polyisobutylene market is valued at US$ 2.3 billion in 2023.

The global PIB market is projected to reach US$ 4 billion by 2033.

Worldwide demand for polyisobutylene is anticipated to increase at a CAGR of 5.6% through 2033.

The Asia Pacific PIB market is set to increase at a CAGR of 4.8% during the forecast period.

*144 figures and 48 tables includes by FactMR