Demand for SCBA is likely to increase rapidly as they are used in safety equipment for rescue operations, at fire stations, during ironwork, and at nuclear facilities & chemical plants, to name a few.

A self-contained breathing device is worn to provide breathing air in oxygen-deficient, dangerous gas, smoke, and other environments where breathing is unsafe. It is frequently used by firefighters and rescue personnel when working in areas of imminent risk to life and health. 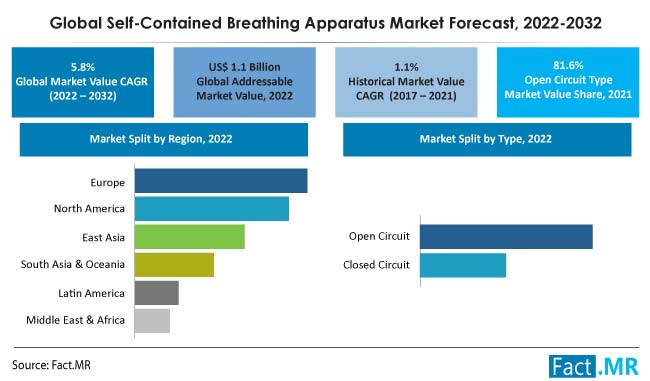 Self-contained breathers are widely used by firefighters and emergency responders for breathing air in life-threatening situations.

The Occupational Safety and Health Administration (OSHA) is an agency of the U.S. Department of Labor, and directs organizations to provide respiratory equipment to personnel in dangerous working conditions. It is expected to stimulate demand for air respirators and complement the growth of the self-contained breathing system market as well.

Firefighting is a risky profession and one way to mitigate the risk of individual firefighters is to provide the proper fire safety equipment.

As many government agencies require the use of personal safety devices such as SCBA in dangerous work environments, SCBA manufacturers are scrambling to meet the latest regulations and standards. Leading manufacturers of self-contained breathing devices use next-generation technology to manufacture state-of-the-art products to increase their sales potential.

What Makes the United States a Huge Market for SCBA?

The U.S. self-contained breathing equipment market holds the largest market share at 91.5% in North America and is poised to record 4.5% CAGR over the projected years.

High product penetration in the United States is due to the strict regulatory scenario and increased employee awareness of personal safety. An increase in large-scale infrastructure projects in the industrial sector is expected to drive the growth of the SCBA market in the country.

Optimal market conditions such as highly skilled labor and affordable modern infrastructure are expected to increase the number of manufacturing facilities in the country. As a result, the United States will see high product demand growth over the coming years.

How is the Russia SCBA Market Predicted to Evolve?

The Russia self-contained breathing apparatus market is expected to hold 41.7% market share in Europe by the end of 2032.

Russia has some of the largest multinational oil & gas companies in the world. SCBA is also used in the oil & gas sector on a large scale in the country. Volunteer firefighters are the backbone of the fire service sector in Russia, thereby increasing the demand for self-contained breathing systems.

Open circuit SCBA is in high demand in European nations such as Spain, France, and the United Kingdom.

Why is Open Circuit Self-contained Breathing Apparatus So Popular?

Open circuit SCBA offers better performance and the segment is expected to expand at a CAGR of 6.5% throughout 2022-2032. Manufacturers are also focusing on improving product development to increase the overall sales of open circuit self-contained breathing devices.

Open circuit respirators are widely used in the oil & gas industry because they are useful for longer rescue missions and shifts in oil rigs. This type of SCBA continuously recycles air, creating an infinite open circuit for the user to breathe properly. This type also helps firefighters protect themselves from life- and health-threatening smoke, toxic gas, and pollutants.

Will the Firefighting Industry Continue to Be the Leader for SCBA Demand?

The firefighting industry is expected to contribute 54.5% market share by the end of 2032.

Firefighting is a dangerous profession and one way to mitigate the risk of individual firefighters is to provide the right equipment to them. SCBA comprises highly specialized devices and the wearer requires a high degree of training to use them safely.

SCBA is equipped with a full-face mask that provides positive pressure on the mask. Growing infrastructure in the oil & gas industry also requires firefighters for different reasons, thereby driving market demand from this end-use segment.

New product launching is adopted as a strategic approach by companies to expand their presence in the market and garner a wider consumer base. Such strategies are leading to the growth of the self-contained breathing apparatus (SCBA) market.

How is the global self-contained breathing apparatus (SCBA) market shaping up?

The global self-contained breathing apparatus market is valued at US$ 1.1 billion and is expected to surpass US$ 1.9 billion by 2032.

How did the market fare over the past few years?

From 2017 to 2021, worldwide sales of self-contained breathing apparatus decreased at -1.1% CAGR.

Who are the SCBA manufacturers in the market?

Which regional market accounts for high sales of SCBA?

The Europe self-contained breathing apparatus market accounts for 32.2% of the global market share in 2022.

Which type of self-contained breathing apparatus is most widely used?

Iscotrizinol Market is set to witness steady growth throughout 2020-2030. The pharmaceutical, chemic...

The global controlled pore metal oxide market is subject to witness a lucrative boost with a notewor...

Compressed Air Dryer Market is expected to surpass a valuation of US$ 6.6 Bn by 2032. Refrigerated a...