Expanding at a CAGR of 6%, the global rare hemophilia factors market is slated to increase from a valuation of US$ 290 million in 2022 to US$ 520 million by the end of 2032. The use of fresh frozen plasma is forecasted to increase at a CAGR of 6.2% through 2032. Fresh frozen plasma is widely utilized to treat bleeding episodes in rare hemophilia deficits due to the restricted availability of factor concentrates.

Hemophilia is a rare, acquired condition in which there are insufficient clotting factors, which prevent the blood from clotting. A protein called clotting factor is necessary for blood coagulation to generally occur. These proteins help the blood clot by interacting with platelets, which are tiny blood cell fragments that form in the bone marrow.

One of the main factors propelling market expansion is the rising hemophilia prevalence, which contributes to the growing demand for treatment choices. Patients with severe hemophilia require ongoing treatment to keep their bloodstreams sufficiently stocked with clotting factors to stop bleeding.

Furthermore, patients who receive the right care are anticipated to experience a lower risk of major bleeding and to develop fewer co-morbid disorders. As a result, the number of patients with hemophilia is continuously surging, which has greatly boosted the demand for treatment, which will eventually rise product adoption rates.

Since hemophilia is a genetic ailment, there isn't a long-term treatment available. However, people replenish the missing factor proteins required for starting blood clotting using a variety of hemophilia treatment methods. The quality of life for persons with hemophilia is greatly enhanced by the use of medicines, including replacement therapy and hemophilia gene therapy.

The development of new treatment approaches in the global hemophilia market is anticipated to be fueled by significant research and development in the field of biotechnology for clotting factors, increasing campaigns and supportive government initiatives for raising awareness about Hemophilia drugs, and more. The goal of pharmaceutical corporations' efforts to increase access to medicines, diagnosis, and awareness around the world is to create public-private partnerships.

The industry is seeing a surge in the creation of novel factor concentrates as a result of rising R&D activity by significant market participants. Regulatory agencies have recently approved the marketing of numerous concentrations. The introduction of new products will probably grow the market. A wider range of new concentrates' accessibility can aid in raising patient awareness and offering them more therapeutic options.

Government regulations and initiatives have also raised patient and professional awareness of the rare hemophilia coagulation disorders, which has boosted the rate of this condition's diagnosis and treatment. With the approval of orphan drugs, better treatment options are now available for individuals with rare hemophilia disorders and other uncommon diseases whose needs have not yet been satisfied.

Patients are increasingly utilizing preventive therapies, which is helping the market expand. Prophylaxis has many benefits, including a decreased risk of joint injury and joint pain. Prophylactic treatment is advised for patients with severe, uncommon hemophilia disorders to stop bleeding.

The effectiveness and performance of prophylaxis are enhanced by ongoing treatment, which accelerates its adoption. This is likely to further accelerate market expansion over the coming years.

“Advances in Treatment of Hemophilia & Approval of Innovative Techniques”

The approval of innovative treatment methods is one of the main factors fueling the growth of the global market for rare hemophilia factors. Individuals with hemophilia have a variety of effective and secure therapy options at their disposal, including cutting-edge extended half-life therapies that can get beyond the restrictions of the current prophylactic, especially in patients with hemophilia B.

Hemophilia types A and B are the most often occurring. The majority of treatment for hemophilic patients has been replacement therapy, which supplies the missing coagulation factors in hemophilia A and hemophilia B. Several market participants are concentrating on developing cutting-edge hemophilia treatment methods.

Key elements driving the expansion of the global hemophilia therapeutics market include the rising development of novel coagulating factors, improvements in healthcare facilities and infrastructure, particularly in developing and emerging nations, and an increase in disposable incomes that encourage people to spend more on better healthcare. In addition to this, the increasing acceptance of medical tourism in some countries would further fuel market expansion.

How is Industry Growth Being Restrained to Some Extent?

Market expansion is constrained by the high cost of hemophilia therapy. The market for rare hemophilia factors is expected to have slow growth due to many variables, including a higher risk of joint damage, an increased chance of spontaneous bleeding, and issues with blood clotting. 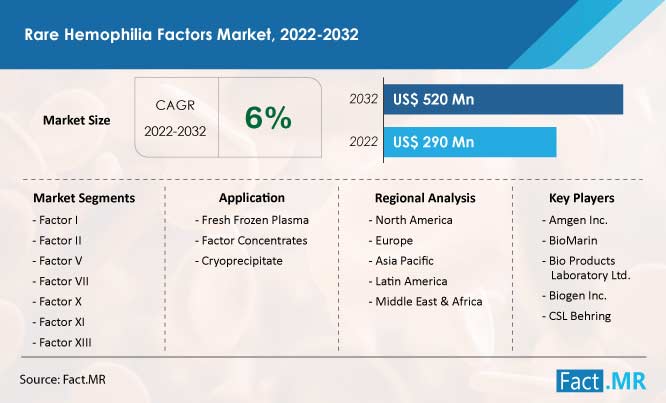 How Can Emerging Companies Penetrate This Market?

Most people don't worry too much over a minor cut on their hand or foot. They can apply a Band-Aid and get on with their lives. However, those who have hemophilia may experience serious bleeding and other medical problems with even the smallest cut or bruise.

Hemophilia affects roughly one in every 5,000 male births and is brought on by a genetic mutation that affects the genes that allow for the production of clotting proteins. Although uncommon, it can also happen to women. Hemophilia also contributes to progressive joint degeneration or recurrent joint bleeding in many of these patients.

Because they are exclusively for people who don't have problems with their immune system after having a therapeutic infusion, the available gene therapies for hemophilia are now restricted. Additionally, the majority of therapies are made to help people with hemophilia A or B who do not have inhibitors, but none of them addresses both forms of the condition, whether they have inhibitors or not. New companies are heavily investing in R&D to introduce new therapies to the market.

North America dominates the global market. People living in the region are changing their attitudes toward prophylaxis medical care, and this is predicted to have a significant positive impact on market growth.

The strong presence of key players, growing initiatives to enhance rare hemophilia disorder therapies, and government attempts to increase diagnosis rates and lower treatment costs are some of the elements supporting market expansion.

“Rising Prevalence of Hemophilia in the Country”

The therapeutic advances in hemophilia, the rise in consumer awareness about technologically advanced products, the growing prevalence of hemophilia, and the existence of a large patient pool are the main factors propelling the growth of the market in Korea.

What is the Demand Outlook for Rare Hemophilia Factors in the U.S.?

Numerous research grants are available for the rare disease study from the National Organization for Rare Disorders (NORD), which has its main office in the United States. Additionally, new U.S. FDA approvals of certain coagulation factor concentrates have contributed to market growth.

Better healthcare infrastructure, reimbursement policies supported by the government, and significant innovations by leading market participants in the form of new product launches are driving market expansion in the U.S.

What are the Growth Opportunities for Rare Hemophilia Factors across Japan?

The market in Japan is estimated to develop at a CAGR of 5.7% over the forecast period. Rising autosomal recessive disorder incidence, elevated consumer awareness of the significance of bleeding disorders, and an increase in product approvals are all contributing to market expansion.

With constant advances in genetic research and supportive government efforts, the market is expected to rise quickly during the projection period.

Why is Demand for Factor VII Gaining Ground?

Due to initiatives conducted by organizations such as the World Federation of Hemophilia for patient advocacy and enhancing diagnosis and treatment of rare hemophilia diseases, awareness of rare hemophilia deficits is predicted to rise throughout the forecast period.

Factor VII is anticipated to hold a significant position in the global market. High factor VII demand might be ascribed to the accessibility of therapeutic choices such as NovoSeven, a recombinant form of factor VIIa.

Which Application is at the Forefront of Rare Hemophilia Factor Demand?

Based on application, rare hemophilia factors are classified into fresh frozen plasma, factor concentrates, cryoprecipitate, and others.

Plasma transfusion is suggested to control bleeding or to prevent bleeding before an urgent surgical intervention in patients who require the replacement of multiple coagulation factors. The fluid component of a unit of whole blood, known as fresh frozen plasma, is frozen for a specific amount of time, often within 8 hours. The recipient's red cells must be ABO-compatible with the FFP. Market expansion is fueled by research & development in the field of fresh frozen plasma.

Several key companies are embracing techniques, including strategic partnerships and marketing to boost the awareness of novel techniques.

The global rare hemophilia factors market is projected to progress at 6% CAGR and reach US$ 520 million by 2032.

Amgen Inc., BioMarin, and Bio Products Laboratory Ltd. are the key players in this market.

Currently, the global market for rare hemophilia factors is valued at US$ 290 million.

The rare hemophilia factors market in Germany is expected to increase at 5.8% CAGR through 2032.