Tamper-proof fasteners, also termed tamper-resistant fasteners, are screws, nuts, and bolts that are recognized by their distinctive drive style. Unconventional drive styles exist in a variety of shapes and sizes but they all have one thing in common: making it difficult (if not impossible) to install or remove without the appropriate tamper-resistant screw bits or drivers.

Tamperproof screws & nuts are utilized in various end-use industries such as industrial & manufacturing, aerospace & defense, automotive, electrical & electronics, IT & telecom, and public facilities, and to name a few.

For instance, in the automotive sector, tamperproof screws, nuts, and bolts are important for preventing the theft of onboard computers, wheels, airbags, stereo systems, and other costly equipment. By employing tamper-proof fasteners & bits, the construction sector can prevent the theft and damage of signs, architectural metal, electronics, gates, machinery, equipment, tools, and more.

Tamper-resistant screws save thousands of dollars every year by protecting from tampering, unauthorized entry, vandalism, theft, and a variety of other situations; hence, they are also called vandal-proof screws. Numerous applications across end-use industries are propelling the demand for tamper-proof fasteners.

Tamper-proof bolts and nuts come in different types and sizes. Tamper-proof screw manufacturers are offering a huge array of standard tamper-evident fasteners as well as tailoring their products to the needs of end users by providing unique styles that can be accessed only through specially designed tamper-proof screwdrivers to ensure the maximum security.

Growing industry-specific applications are expected to propel the demand for tamper-proof fasteners & bits over the coming years.

From 2017 to 2021, the global tamper-proof fasteners market registered a CAGR of 0.4%, and according to Fact.MR, a market research and competitive intelligence provider, the market is projected to witness growth at 6.3% CAGR through 2032. 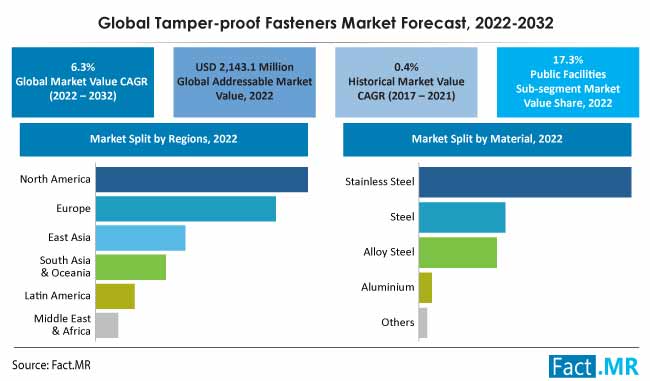 Why is the Popularity of Tamper-proof Fasteners Increasing Rapidly?

The world has changed dramatically in recent decades, influencing how we work, socialize, spend our leisure time, and even commute from A to B. With these breakthroughs come a new set of threats and risks from which we must protect ourselves and others.

The public space is vulnerable to theft, vandalism, and intervention while industries are concerned about unauthorized manipulation in a variety of assets.

Tamper-evident fasteners are now being used for several application areas, ranging from protecting license plates to preventing access to the working parts of mobile phones, laptops, and other gadgets. Design teams are incorporating unique patented head styles and drive recesses as well as material alloys to withstand extreme conditions.

For instance, fasteners made from A4-70 stainless steel do not degrade if they come in contact with other chemicals or salt water. Such materials with high tensile strength and excellent corrosion resistance are perfect to withstand extreme conditions in the marine, medical, and chemical sectors.

Increased need of asset security from various application sectors is expected to drive the market growth of tamper-proof fasteners.

How is Market Expansion Being Hindered to Some Extent?

Use of welding and other alternatives such as adhesives can hamper the demand growth of tamper-proof fasteners and bits, as both of the former are cheaper processes and can be used in end applications where high-end security is not required, such as park benches for example.

Standard riveting can also be used in various applications due to its cheap availability.

Why is Product Demand in the U.S. Higher Than the Global Average?

The U.S. tamper-proof fasteners market accounts for the largest market share of over 85% in North America in 2022 and is projected to expand at the rate of 7% during the assessment period.

This high growth is attributed to several factors such as growth in industries owing to advancements in technologies, favourable government initiatives related to public places, and rising demand for tamper-proof fasteners & bits from businesses across self-service & automation, and IT & telecom, as well as manufacturing industries.

How is the China Tamper-proof Fasteners Market Evolving?

Due to the massive growth of end-use sectors in China, such as industrial & manufacturing, infrastructure, aerospace & defense, IT & Telecom, etc., sales of tamper-proof bolts and nuts are expected to only increase over the coming years.

Tamper-resistant fastener manufacturers in China are mainly operating through e-Commerce platforms and have a strong presence across the Asia Pacific region.

Which Type of Tamper-proof Fastener Accounts for Highest Usage?

Tamper-resistant bolts & screws dominate the market with 71.2% of the overall market share in 2022. The segment is projected to rise at 5.9% CAGR during the assessment period owing to factors such as head type, drive style, material, and scope of these fasteners being suitable for several end-use applications.

Tamper-resistant nuts, also known as tamper-proof nuts, are used in applications requiring high security. For instance, the shear nut is a high-security permanent fastener; once installed, the shear nut leaves a tamper-resistant cone while the hexagon part shears off at a predetermined torque.

Global sales of tamper-resistant nuts are expected to increase at a CAGR of 5.1% over the decade.

Amongst them, public facilities dominate the market with 17.3% market share. In public facilities, tamper-proof fasteners are utilized in park benches, schools, museums, waste bins, safety rails, buses, trains, and other various assets to protect them from theft or vandalism.

Apart from this, tamper-proof fasteners find wide usage in the electricals & electronics industry, which holds 13.5% market share and is projected to expand at 7.3% CAGR during 2022-2032.

Electrical and electronics applications require a high level of security and prevention of unauthorized access; hence, demand for tamper-proof fasteners is expected to increase steadily in this industry.

Companies are continuously introducing unique patented drives to enhance security against thieves and vandals looking for an easy target. Market leaders are investing in the research & development of material science to enhance the application-specific security of tamper-proof fasteners with different combinations of material alloys and platings.

The global tamper-proof fasteners market is valued at US$ 2.14 billion.

Global sales for tamper-proof fasteners are anticipated to reach US$ 3.95 billion by 2032.