Loading spout consist of a series of stacking cones that enables the product to free fall into the vessel that is being loaded and is used to prevent dust clouds from getting formed and settled on industrial equipment during various industrial processes.

Loading spouts are used in various industries such as food and beverage, mining, oil & gas, shipping, pulp and paper, construction, chemical among others.

China is the top rice importing country in the world and has a tariff rate quota (TRQ) for 5.32 million tons that is evenly divided with 2.66 million of both long grain and others.

ASEAN countries are also one of the major consumers of food grains and rice owing to the growing population in the Asian countries and the high inclusion of grains in the diet.

This growth in the food processing industry is expected to upsurge the requirement of loading spout in the industries for handling bulk materials.

Global wheat trade for 2018-19 is forecast at a record, driven by strong demand resulting from rising incomes and shifting diets largely in Asia and Africa.

While Argentina, Australia, Canada and the United States are forecast to have slightly higher production, the European Union and Black Sea region (mainly Russia) are down sharply.

However, the dust control regulations in the European region are highly stringent in comparison to other regions ultimately resulting in growth of the loading spout market.

In May 2006, five European multi-lateral financial institutions launched the “European Principles for the Environment” (EPE) and subscribed to a common declaration recognizing the comparable approach taken by the signatories to environmental management and to the integration of environmental considerations in their respective operations and mandates.

The demand for loading spout from the cement industry has increased significantly in the last few years, due to increase in urbanization and growth in the industrial sector.

Multinational companies are eyeing the Asia Pacific excluding Japan region in the anticipation of increased demand from the building & construction industry. China has become the largest cement producer in today’s global scenario, followed by India.

A steady rise in the cement industry will increase the demand for its bulk handling, and in turn, loading spout. 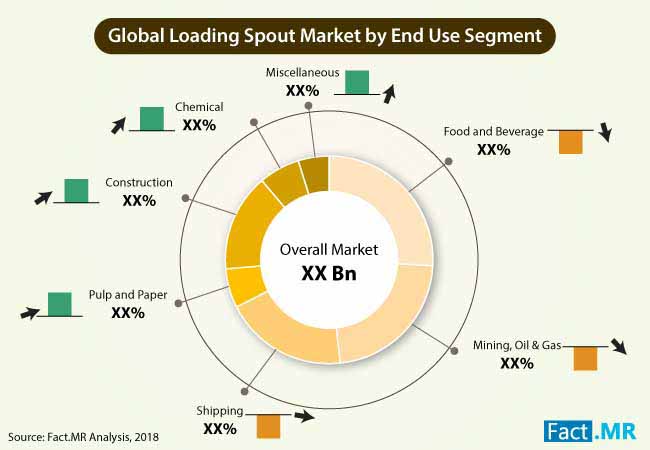 They are highly preferred for food grains and cement handling. Loading spout are highly durable and have a lifespan of up to a decade or more.

With the increase in other industries such as food grain production in food and beverage industry or bulk handling in shipping industry, the demand for loading spout is anticipated to increase.

In addition, there is a great demand for loading spout from the cement industry in emerging economies such as China and India, which is expected to significantly contribute to the growth of the overall market.

The key players such as WAM group and Beumer Group have grown to stand for the shift in bulk material handling and equipment supply.

They invest every year a significant amount of their global turnover in R&D and related activities, which are primarily dedicated to the processing and handling of granular and powder materials, through primary and applied research.

Key players operating in the global market for loading spout include

By Flow Rate (meter3 per hour)

Cold Trap Market is expected to grow positively during the years 2021-2031. Increasing focus on sola...

Sandblaster market is set to witness steady growth during 2021-2031. Construction and automotive sec...