Wood is made up of a cellulose matrix of fibril bundles, which are made of smaller elements known as microfibrils. The crystalline nature of cellulose microfibrils are maintained through processes of electrospinning, homogenizing, ultrasonication, grinding, and cryo-crushing, allowing for superior mechanical properties. The unique characteristics of microfibrillated cellulose (MFC) fiber makes it a highly-sought-after material in multiple end-use industries.

Efforts by food, paper, and packaging industries, in particular, towards sustainability, is increasing the scope of adoption for MFC fiber with objectives of better barrier properties, strength, and degradability. Niche applications ranging from construction to agriculture set positive prospects for the industry in the long term.

The report by Fact.MR gives a detailed outlook of the microfibrillated cellulose (MFC) fiber market in 20+ high growth markets, where Europe leads the way as far as demand is concerned. It also dives deep into the effect that the COVID-19 pandemic has had on this space, and what trends are expected in the years ahead.

From 2016 to 2020, the microfibrillated cellulose fiber market has reflected strong growth, expanding at around 12%. The industry has been moderately fragmented. Also, the packaging sector has particularly witnessed stronger growth in high-income regions, with Europe and the United States accounting for higher production in comparison to the Middle East & Africa and Latin America.

Fact.MR has forecasted the global MFC fiber market to rise at close to 14% CAGR from 2021 to 2031. Growing popularity of sustainable packaging in food, cosmetics, and pharma sectors, and the lightweight, high-strength physical characteristics of MFC fiber are likely to aid growth, with relatively strong demand from the paints and coatings sector.

How are Sustainability Goals Driving Developments in MFC Fiber?

With the threat of climate change and environmental degradation, sustainability initiatives have driven up demand for MFC. The primary benefit of using microfibrillated cellulose is that it can bolster strength and reduce the weight of fiber materials in a sustainable manner, by generating end products with reduced material volumes, without compromising on performance.

For example, as per a Weidmann report, the incorporation of 1% of MFC can account for up to 20% product performance improvements. MFC fibers allow a material with higher strength and rigidity in comparison to glass or carbon fiber, while being lighter simultaneously. MFC also provides superior moisture and oxygen barrier properties. MFC can be used in the form of nanocomposites, film, and paper coatings. The report also states oxygen transmission rates of 4 to 10 mL/m2day, and a moisture transfer rate as low as 0.4 g/m2day for MFC-based films.

How is MFC Fiber Production from Thermomechanical Pulp Creating Opportunities?

Microfibrillated cellulose is a renewable commodity, and has a number of applications. MFC fiber is projected to play key roles in bolstering paper-based products. It is increasingly gaining interest as a substitute to plastic, and thickening agents in paint and coating products.

Microfibrillated cellulose has also gained increased attention in research for forestry industrial applications. MFC has special characteristics and can find use aside from conventional chemical cellulose pulp sources. Production of MFC from thermomechanical pulp (TMP) is fairly new, and is expected to generate key growth opportunities.

What are the Leading Challenges for MFC Fiber Market Players?

The long-term prospects of the microfibrillated cellulose fiber market largely remains very positive. However, the sector will face obstacles, potentially limiting growth of the industry. For example, lack of adequate knowledge or expertise in terms of the structure, characteristics, and components associated with MFC is a challenge for market expansion.

Pricing is also expected to remain an issue in terms of production, and concerns over cost-effectiveness arising from raw material supply chains, complexity of production, and issues with long-term storage are problems that market players will have to deal will in over the coming years. 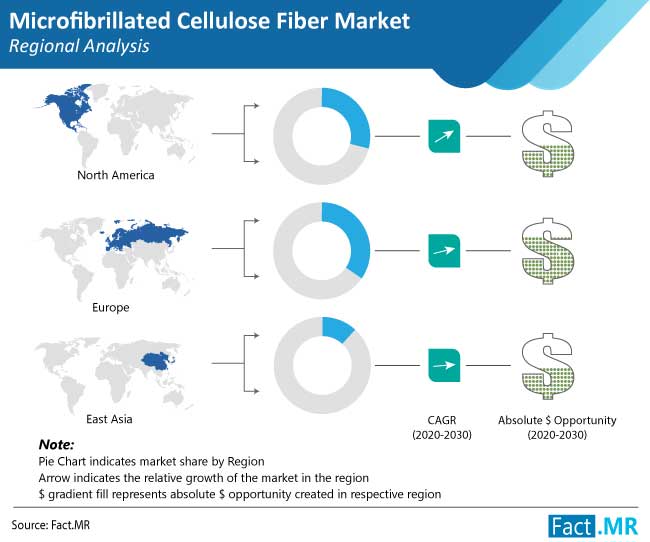 What are the Sales Prospects for MFC Fiber in the United States?

As per the Fact.MR report, North America is the second-largest regional market for MFC fiber, and the United States is projected to account for more than 90% of the region’s market share by the end of the projection period.

According to the environmental protective agency (EPA), in 2018, around 32 million tons of corrugated boxes were recycled from close to 34 million tons of overall recycling volumes. The recycling rate for corrugated boxes was 96.5 percent. Further, as per the 2020 American Coatings Association (ACA) Sustainability Report, 11 states in the country enacted laws to establish detailed sustainable paint and coating adoption programs under their jurisdictions.

Also, currently, dietary fiber intake, on an average among adults in the United States, accounts for approximately 15 grams a day, which is around half the recommended amount. Growing levels of health awareness and consumption of fortified processed foods in the country have been noted as per a study by the University of California San Francisco. These trends are key factors that are likely to bode well for the future of the microfibrillated cellulose fiber industry in the U.S.

How Does Norway Contribute to the MFC Fiber Industry?

In Europe, according to the Fact.MR report, Nordics is the largest and fastest-growing market for microfibrillated cellulose fiber, accounting for close to half of the region’s share by the end of the assessment period. Norway is the leading country in the region, estimated to account for a little less than half of Nordics share.

The European Council of the Paint, Printing Ink, and Artist’s Colors Industry has indicated that, Europe’s green building space has quadrupled, surpassing 700 million sq. mts. in 2017. The EU’s construction production regulations on sustainable constructions are expected to have a positive impact on environmental product declarations, which bodes well for MFC fiber adoption.

Returnable packaging systems have been a part of Norway’s businesses since the early 1900s. However, refillable glass and PET packaging was stopped in 2014. New processes are supported through systems of reverse vending machines, allowing consumers to recycle packaging, while gaining nominal monetary returns from the effort. Also, lower taxes for higher recycling in the country will generate opportunities for players to leverage in the long term.

Why is China a High Potential Market for Microfibrillated Cellulose Fiber?

China is currently the largest microfibrillated cellulose fiber market in the Asia Pacific excluding Japan market, and is the fastest-growing regional market in the world, expected to progress at over 19% CAGR through the projection period.

The Chinese government has issued standards to promote sustainable packaging materials in its billion-dollar logistics industry, as it looks to reduce waste in a country where millions of packages are delivered to consumers every day. In January 2020, the National Development and Reform Commission (NDRC) issued a fresh ban on the usage of plastic products that include non-degradable plastic bags, single-use plastics, and packaging plastics.

As the largest producer of pigments in the globe, China is a key influencer in the global paints and coatings industry, as per a study by Oxford Academic. Water-based coatings and paints in the country accounted for more than 40% of its overall production in 2018. These are key factors that will influence developments in the MFC fiber industry in the years to come.

How will MFC Fiber Fare in Performance Enhancer Applications?

Microfibrillated cellulose is widely used for 2 major areas of application, including barrier films and as a performance enhancer, in roles such as strengthening agents, rheology modifiers, and thickening agents. Demand for MFC as a performance enhancer accounted for major market share, at more than US$ 66 Mn in 2020. Scope of application in food, pharmaceuticals, and personal care products is a key driver behind demand. However, barrier film applications are reflecting a faster rate of growth on the back of sustainability initiatives in the packaging sector.

What are the Commercial Prospects of MFC Fiber in the Packaging Industry?

MFC fiber finds use in a wide range of end-use industries, including paper production, personal care, packaging, paints & coatings, and food. Packaging industry applications hold the lead, with a market share of close to 40% through the assessment period.

Microfibrillated cellulose has been found to be a natural performance enhancer for bio-based packaging material formulations, enabling superior durability, while also meeting international food safety standards, making it essential for the paper and packaging industry.

How will the microfibrillated cellulose fiber market expand through 2031?

The global microfibrillated cellulose fiber market is likely to derive growth from packaging applications in the food, personal care, and pharmaceutical sectors, reflecting an impressive CAGR of around 13% through 2031.

Which is the dominant MFC fiber market?

Europe is expected to be the leading market for microfibrillated cellulose fiber products, driven by strong revenue growth in the EU-4.

How is COVID-19 impacting the microfibrillated cellulose fiber growth projections?

The COVID-19 pandemic has moderately affected growth in the industry. Lockdown restrictions through 2020, especially in terms of food packaging, has hurt demand from the food service sector.

Who are some of the prominent MFC fiber market players?