Fact.MR- a market research and competitive intelligence provider, foresee a thriving growth in aircraft Towbar demand. The global aircraft towbar market is expected to grow at 3.8% CAGR during 2022-2032 and surpass the value of USD 12 Million by 2032 end. The global ground support equipment market is expected to reach a valuation of USD 4.5 Billion in 2022, however aircraft towbar holds USD 9 Million in ground support equipment market.

Aircraft towbars are still weapon of choice when it comes to pushback and other ground operations. Airlines industries are particularly focusing on efficiency and reducing the operational time and time Lag. High rate of growth in air traffic with a relatively low rate of expansion of airports and the construction of new ones is leading to a decrease in the time of service per flight. Thus, aircraft towbar market accounted for <1% market valuation of global towing equipment market in 2021.

To do so, workforce and equipment previously used are being replaced by new and more efficient ones. The key driving factor pushing the demand for aircraft tow bars around the globe is the convenience provided by the multi head tow bars to the end users and continuous up gradation on technological front. Such growing activities for multi-head type of product in airline industries is expected to hold a market share of 61% in 2022.

Traditionally, as go-to-equipment to help tow aircraft has several confinements associated with it, including time-intensive installation, cost-intensive staff training, high cost of the equipment, and limited speed. These challenges have led aircraft towbar manufacturers to join forces and come up with an advanced solution that offset the operational uncertainties apropos of towing aircraft, which in turn has led to the development of towbar-less tugs.

A prime example of such co-development is “EJP Towbarless Tug,” by the collaboration between Eagle Tugs and Tronair. The trend of towbarless is expected to significantly impede the growth of the market, as these new equipment enable operators to utilize a zero-degree turning radius that results in precise positioning of aircraft with lesser space requirement for manoeuvrability.

How Rising Preference for Air Travel is expected to Impact Aircraft Towbar Market?

According to a 2021 report published by ICAO (International Civil Aviation Organization), the number of passengers traveling by air was near to 2.2 Billion.

Factors such as growth of international travel, growth in tourism industry, higher disposable income, competitive pricing by airline companies for air travel, and increase in amenities provided during air travel with drastic reduction in traveling time have mostly subsidized to increase preference of consumers for air travel. This is influencing airline carriers to deploy new aircraft which in turn, is driving the growth of the aircraft tow-bar market

How Maintenance Outsourcing by Airlines to Remain a Key Revenue Stream for Aircraft Towbar Manufacturers?

Preventative maintenance persists as a vital aspect among aircraft ground support equipment (GSE) manufacturers, and this is no exception for towbar producing companies. The maintenance approach followed by aircraft towbar manufacturers is comprehensive, which involves procedures for all components, ranging from towbar body & head mechanism to lift tow rings.

Outsourcing these maintenance operations to specialty companies, such as FlyTek GSE, is a key industry trend that is a consequence of the emphasis on minimizing downtime and repair costs through quality preventative maintenance.

This has further built the customer confidence with regard to the safety requirements of towbars while offering them the convenience of on-site trouble shooting and maintenance. Aircraft towbar manufacturers will continue to witness revenue benefits from these maintenance outsourcing activities in the upcoming years.

How Replacement Rate of Aircraft Towbar to Affect the Overall Growth?

As with all aircraft handling equipment, towbar and heads are subject to wear and damage over time. Equipment ages past its prime for various reasons, most common of which include erosion and corrosion. As aircraft tow-bar is mainly made up of aluminum and steel. It gets corroded due to climatic aspects, low-quality material, and others.

The piece of equipment must be strain and corrosion free because it secures million dollars aircraft. Thus damaged tow-bar product is often paid attention by airplanes towing operations manager and purchasing agent for replacing old tow-bar by new leads to increase in the sale of aircraft tow-bar manufacturers.

How Collaboration Between Manufacturer and Distributor to Impact the Global Growth?

Long-term prospects for aviation will remain strong. Tier 1 and Tier 2 manufacturers are investing in technologies and entering into strategic collaboration with suppliers based around the globe to attain capacity to handle rapidly increasing demand for aircraft tow-bar.

Through collaborations with local suppliers, the manufacturers are looking to enhance customer reach in markets by adding new clients to their list as well as improving responsiveness and services to consumer in the global market. The trend will certainly emerge as a competitive strategy in the coming years and is visible across all major vendors present in the aircraft tow bars market place.

What are the Driving Factors of Aircraft Towbar Market in UAE?

UAE has turned out as a hot spot for the airline industry has been observed by the solid growth of some of its global renowned players such as Etihad Airways, Emirates and others purchasing a bulk of large and narrow body of airlines for the future. The UAE region is expected to grow at a CAGR of 3.8% over the forecast period.

Why India is a Pivot Point for Aircraft Towbar Manufacturers?

India based aircraft tow bar market has commanded much growth and development in the past decade, primarily driven by the surge in air traffic. It is expected that the expansion of air traffic volume and fleet sizes in the region will continue to grow at a CAGR of 3.6% over the forecast period, ultimately boosting Ground Support Equipment (GSE) services demand which leads to increase the sales of aircraft tow-bar. 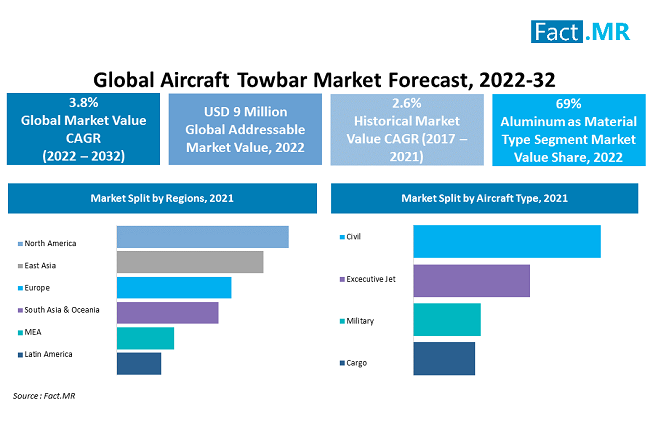 How Electric Type of Towbar Mechanism to Remain Prominent Segment in the Market?

The preference of airlines is currently witnessing a paradigm shift toward battery-powered electric aircraft towbars, to eliminate the routine maintenance requirements associated with their gasoline counterparts.

With the improvements in battery technologies, from low-density lead-acid to high energy lithium-ion with SiC films, the aviation industry is gradually leaning toward electric ground support equipment, thereby impacting adoption and production of electric aircraft towbar as a consequence. The electric type of towbar mechanism is expected to hold 21% of market share in 2022 and is likely to reach a valuation of USD 2.8 Million by the end of 2032.

Which Segment in Product Type is Likely to Witness Accelerated Growth?

Sensing the requirement variations in aircrafts, prominent players in the market have introduced the equipment with several designs, which include standard/universal and multi-head being sought-after in the industry. The multi-head type of product is expected to grow 1.4X over the period of 2022-2032.

What will be the valuation of global aircraft towbar market in 2032?

The market is forecast to reach a valuation of USD 12 Million by the end of forecast period.

How much absolute dollar opportunity will be provided by aircraft Towbar market?

The market is expected to provide an absolute dollar opportunity of around USD 4 Million during 2022-2032.

North America holds the leading market share of around 27% in 2022 and presumed to remain in same growth curve by the end of 2032.

Multi-head segment as product type have the highest market share of 61% in 2022.

What is the market value of North America region in 2022?

North America region is likely to offer great growth prospect with a market valuation of USD 2.3 Million in 2022.

How much market share is anticipated to hold by aluminum as material type?

What will be the market valuation of shear pin as tow-head type in 2022?

The shear pin is expected to reach a market valuation of USD 5.3 Million by the end of 2022.