The aircraft pump market accumulated a market value of US$ 3.73 Bn in 2021. The sales of aircraft pumps are expected to exceed US$ 6 Bn by registering a positive CAGR of nearly 5% in the forecast period 2022-2032.

As per Fact.MR’s report, from 2017 to 2021, the global sales of aircraft pumps surpassed US$ 3.73 Bn by the end of 2021. Increase in number of flights especially in Asia Pacific and Europe along with technological advancement is leveraging the demand for aircraft pumps. Furthermore, aircraft companies are keen to adapt electrically driven pumps in the assessment period.

Sales were adversely impacted during the height of the COVID-19 pandemic, as the frequency of domestic and international air travel plummeted drastically. The International Civil Aviation Organization (ICAO) registered a decline of almost 60% in terms of passenger air traffic in 2020 compared to 2019. Eventually, as restrictions began to be lifted in the wake of reducing infections, prospects began to be restored throughout 2021.

Future market demand is dependent on rising preference for incorporating versatile aircraft fleet offering maximum capability and minimizing risks. Aircraft manufacturers are increasingly incorporating light material to reduce overall drag and improve operational efficiency. Thus, the sales of aircraft pumps are expected to exceed US$ 6 Bn by registering a CAGR of nearly 5% in the 2022-2032 assessment period.

Significant growth in passenger and freight air transport is driving the demand for new aircraft, consequently increasing competition between manufacturers in terms of performance optimization and reduction in maintenance and operational cost.

The International Air Transport Association (IATA) estimates the number of air travellers to close in on approximately 7.2 billion by 2035, with most of the traffic coming from the Asia Pacific. IATA further projects China to overtake the US as the largest aviation market by 2024. As conventional aircraft are fast being replaced with new fuel-efficient variants, aircraft pump manufacturers are increasingly focusing on developments in terms of high-pressure lightweight attributes.

A growing customer base combined with low operating costs is likely to benefit aircraft components manufacturers and OEMs in the future. Airlines are increasingly opting for lightweight pumps that can improve fuel efficiency. Additionally, growth in air passenger traffic is leading to a shorter replacement cycle, this is driving demand for aircraft pumps by the Maintenance, Repair, and Overhaul (MRO) industry.

Fixed displacement pumps are gradually being replaced by piston pumps in aircraft, owing to their constant pressure variable displacement. Most of the aircraft have adopted hydraulic pipe and hydraulic/fuel oil heat exchanger, which has entailed significant heat-generation challenges, especially in military aircraft.

Various investigations conducted recently have shown that pressure requirement is excessive in a combat state, while other stages of flight require lower pressure to control extreme heat generation. This has further led to the development of new pumping systems for military aircraft. Responding to the heat generation concerns, researchers across countries such as China, America, and Britain are working on the development of intelligent pumps and dual-stage pressure pumps.

The dual-stage pressure pump is currently being deployed in various aircraft, as they facilitate catering to pressure-related requirements, thereby improving performance. Intelligent pressure pumps have witnessed wide adoption in aircraft hydraulic systems in recent years, which has driven the demand for displacement sensors, temperature sensors, and pressure sensors.

Variable pressure and flow produced by these sensor-equipped pumps, depending on the flight state change, continue to complement the penetration of intelligent pressure pumps. However, most of the sensor-based pumping systems are still in the testing stage, with promising future scope for adoption in aircraft.

The aviation sector is showing an increased interest in using electricity as a power source for airplanes, owing to their cost- and energy-related benefits over gasoline. The trend of electrification is gaining momentum in the aviation industry, as leading players show a marked preference for electric motors, thereby constraining the adoption of conventional aircraft pumps.

Fuel cell-based and battery-operated systems are undergoing continuous advancements, in line with the focus of industry players on the developments that ebb the power consumption below 100kw. Thus, the shift of aircraft manufacturers toward battery-operated systems, in line with advancements in lithium-ion technology will emerge as a key concern for conventional aircraft pump manufacturers.

Air traffic boost is likely to come from the Asia Pacific including China, India, and Australia through the development of new airports and new routes. The investment in the purchase of new aircraft is likely to provide an impetus to the aircraft pumps market.

Sales of aircraft pumps are also likely to increase in Europe owing to the high rate of tourism and companies investing a huge amount in aircraft manufacturing.

Recently, with an increase in demand for air services and a rise in aircraft production globally, the value of motors, pumps, actuators, and other aircraft components has also increased, thereby, benefiting OEMs and component manufacturers.

Moreover, people from countries like U.K., Germany and Spain have shown an inclination towards traveling by aeroplanes. Thus, Europe is expected to possess more than 30% market share for Europe. 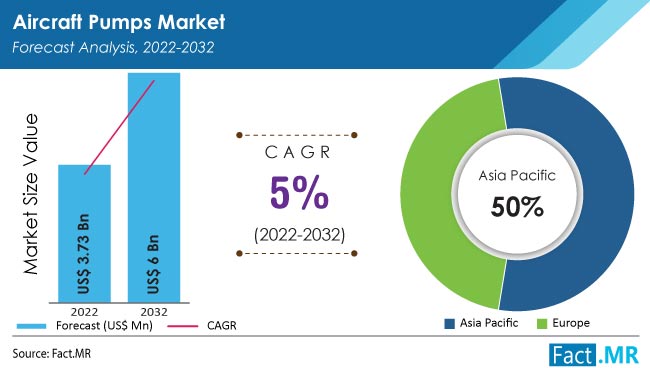 With the advent of more electric aircraft designs, defense aircraft integrators and users continue to focus on reduced operational cost combined with easy maintenance checks, which has further complemented the replacement of mechanical and hydraulic systems with electrical variants. As per Fact.MR, electric motor driven pumps are expected to accumulate more than 40% revenue.

Jet pumps continue to witness significant adoption in aircraft fuel systems, owing to their greater reliability, and absence of moving parts, which further deprives the probability of failure. In addition, jet pumps have no moving parts that do not wear. Moreover, jet pumps require low maintenance costs.

Furthermore, jet pumps have the ability to run for longer periods of time as they can adjust power fluid injection rates. Thus, jet pumps are expected to hold more than 35% market share for aircraft pumps in the sales indicator period.

Established players continue to consolidate their position in the aircraft pumps market, accounting for approximately 2/5th of the market share. Technologically advanced and customized product designs, along with the development of highly efficient and lightweight aircraft pumps are key focus areas of these players, with an aim to remain compliant with regulations on emissions.

Jet pumps are expected to hold more than 30% market share for aircraft pumps in the sales indicator period.

The aircraft pumps industry is expected to possess more than 30% market share throughout Europe.