Further, global fibrosarcoma market holds nearly 25.7% market share in global sarcoma therapeutics market which is likely to grow at a CAGR of 7.9% during the forecast years.

All along 2017-2021, the historic year's global fibrosarcoma market observed slow growth with 3.9%. Consumers with the mounting needs and amplified spending by the governments in the innovative technologies advancement have prospered the fibrosarcoma market.

Owing to following aspects, the demand of fibrosarcoma can be assessed during the forecast period by split the assessment timeline into three sections

1. Short-run: recovery growth is slow over the short –term of 3 years.

2. Medium-run: price and sales normalization are likely to rise throughout this time frame.

Global fibrosarcoma market has reached at the valuation of USD 332.5 million by the end of 2021 with the growth of 3.9% CAGR. It has generated and absolute dollar opportunity of around USD 58 million in last half-decade.

The growing population with fibrosarcoma cancer likely to drive the demand for the treatment in coming years which will boost the growth of the market. However, market is likely to grow at the 5.8% CAGR and offer and touch the valuation of USD 612.7 million by the end of 2032.

The fibrosarcoma demand is expected to increase at a steady rate during the forecast period at a CAGR of around 5.8%. Creating an optimistic approach for the market participants, with a purpose on the addition of health safety features in the fibrosarcoma.

Few New Treatments on the anvil in the global Fibrosarcoma Market

The rarity of bone sarcomas such as fibrosarcoma makes it difficult to perform outcome studies on enough cases. Collaborations between centers and large referral centers provide the best opportunity to amass a sufficient number of patients,

However, the heterogeneity of observers, treating physicians, and patients brings its own set of challenges. Diagnostic criterion difference could result in the complete inclusion or exclusion of patients from studies. Medical oncologists can also differ in drug regimen preferences, particularly in the case of their older patients who may have lesser tolerance to side-effects.

Further, an increased willingness and tolerance to treat side effects may lead to some healthcare personnel continuing chemotherapy longer than their peers. Differences in surgical skills and technique also come into play with respect to patient outcomes.

Fibrosarcoma is a rare bone malignancy. Although it is similar in some aspects to other sarcomas, fibrosarcoma is a distinct clinical entity that has many unique characteristics. Fibrosarcoma outcome improvement has been lagging compared to that of other bone sarcomas.

It is impossible to perform large-scale randomized trials as the fibrosarcoma cases are few and far between. Even larger cancer centers report few, if any, cases of bone primary fibrosarcoma annually. Surgery is currently the preferred form of treatment but transitional research advancements could hold the key to novel targets for systemic treatment.

The notable trend to treat these rare cases of fibrosarcoma at cancer centers with medical professionals specializing in its treatment offers the best possible hope to maximize care and gather crucial data to treat future generations.

Why the United States has Enormous Market for Fibrosarcoma?

Cancer has a massive impact on American and global society as a whole. According to statistics from National Cancer Institute, more than 1.8 million cases of cancer were diagnosed in the U.S in 2020 and approx. half a million perished. Cancer mortality is usually higher in men than in women with the maximum cases reported in African American men.

Further, roughly 2/5th of all American men and women will be diagnosed with cancer at some point in their lives, making national cancer expenditure a considerable healthcare burden. Although the overall cancer death rate has certainly declined since the early 90’s, the rates for some cancer have remained stable or even increased.

In the case of soft tissue sarcoma, the Institute estimates 5-year survival rate to be in the range of 50%. The statistics take into account Kaposi sarcoma – a form of sarcoma that has a relatively poorer outlook than other types. The 10-year survival rates are slightly lower indicating that the bulk of patients who survive five years are probably cured. This reinforces the need to detect fibrosarcoma as soon as possible so that treatment can be administered and is effective.

However, the United States fibrosarcoma market is projected to grow at a CAGR of 6.8% and generate and absolute dollar opportunity of nearly USD 102 million by the end of 2032.

Cancer is the second-largest killer in the Latin American countries and its burden is likely to grow more in the years to come. In the major countries of Latin America, cancer is the cause of 19 percent of all the deaths on average.

Due to the growing population and growth in the proportion of geriatric population in Latin America, the mortality in the region is set to rise between 2012 and 2035. The number of cases of cancer are projected to rise by 91 percent during this time span, and the cancer related deaths are related to rise by a whopping 106 percent. Due to this, the economic costs of cancer for the region are also set to increase significantly.

Mexico fibrosarcoma market is the leading region in Latin America which is acquiring significant market share. It is expected to grow at a CAGR of 5.8% and offer significant absolute dollar opportunities over the assessment period. 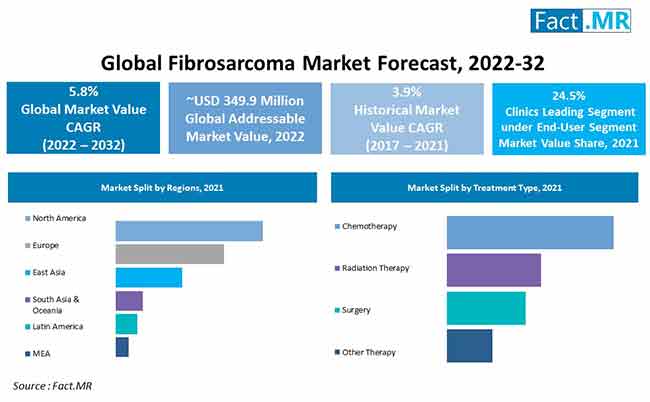 Which Treatment Type Having Highest In Demand in the Fibrosarcoma Market?

Fibrosarcoma is a type of malignant mesenchymal tumor primarily from fibrous connective tissue and known for the presence of undifferentiated anaplastic spindle cells or immature proliferating fibroblasts in a specific pattern. Fibrosarcoma is most commonly observed in males between the age of thirty and forty years.

Chemotherapy is the foremost treatment which is widely adopted by the patients and doctors to treat the fibrosarcoma. Owing to this chemotherapy treatment type has acquired more than 2/5th market share in global market. This likely to continue its dominance in global market during the forecast years.

Which End-User segment is Poised to Show Lucrative Growth in Fibrosarcoma Market?

To recover penetration across well-paid markets, the above-mentioned companies use a combination of organic and inorganic strategies. Alliances and agreements with leading fibrosarcoma suppliers, acquisitions, product launches, merger, and the geographical expansion all part of these strategies.

What is the global Fibrosarcoma Market scenario?

The global value of fibrosarcoma market is estimated to be worth over USD 349.9 Million in 2022.

What was the last 5-year CAGR for the demand in the Fibrosarcoma Market?

Who are the prominent players in the global Fibrosarcoma Market?

Which is the most leading region in the Fibrosarcoma Market?

Chronic pyelonephritis treatment market is likely to grow at a moderate rate by 2028. Growing cases ...