The number of ambulances in regions, such as APAC, does not meet the WHO standards. Insufficient ambulances along with the lack of ambulance personnel offers opportunity for the growth of ambulance cots market considering the growing efforts made by public and private players to meet the demands.

Several factors could also offer significant growth opportunities, especially in favorable conditions such as government investment to increase awareness, launch and adoption of private EMS services, and funding for increasing the number of ambulances (public & private) to meet the demand.

For an instance, in Australia, the budget in 2017 added 50 new relief paramedics to the existing NSW ambulance services. Thus APAC region is expected to witness a high growth rate for ambulance cots market, through the forecast period. 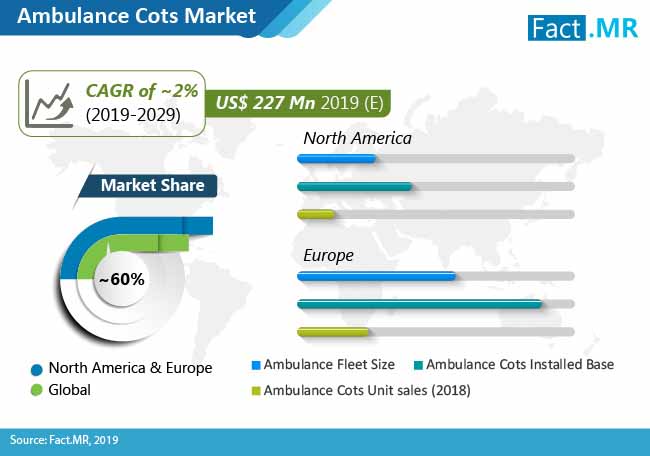 High Cost for Emergency Services Hampering the Use of Ambulance Services

Manufacturers of ambulances have to adhere to the stringent regulations, resulting in the high cost of the ambulance. Furthermore, with the added cost of essential equipment and paramedics, the cost of an ambulance ride is very high.

The ageing population is rising across the world. According to World Bank population over 65 years in China has increased from 9.7% in 2015 to 10.1% in 2016. Diseases such as cancer, diabetes, osteoporosis, dementia, COPD and many others are strongly associated with old age that offer opportunity for growth of emergency services.

It has been noted that a majority of ambulance dispatches are addressed to patients of 65 years and older. With the increasing aging population, there is a trend of increased use of emergency services that include the use of ambulances. This trend favors the growth of the ambulance cots market.

One of the most common causes of ambulance calls is cardiovascular disease-related emergencies, such as a heart attack. It is also the number one cause of deaths across the globe. In the U.S., about 600,000 people die due to heart diseases every year.

The proportion of the population living with heart failure in China, Japan, Malaysia, and Singapore was estimated to be about 1.3%, 1%, 6.7%, and 4.5%, respectively, in 2015. Insufficient physical activity, tobacco smoking, increased blood glucose, and ageing population, are some of the factors that trigger the number of cardiovascular diseases. Increase in the number of cardiovascular cases consequently drives the use of ambulances and support the growth of the ambulance cots market globally.

Many studies conducted in Asia Pacific indicate that a majority of ambulance dispatches were to address with patients 65 years and older. Thus, large patient pool in the region is expected to strongly support the rapid growth of the ambulance cots market.

Increasing number of private ambulance service providers are also seen in Latin America. This region is expected to witness a trend of increasing adoption of air ambulance services that in turn will favor the growth of electric and pneumatic ambulance cots.

The awareness regarding emergency services is mandatory among the general public for the success of EMS service. For instance, a study conducted on a small sample of Indian population resulted that about 73.0% of participants are aware of 108 ambulance services in the country, however are not aware of other local providers of EMS.

In Australia, NSW Ambulance conducts a number of campaigns to create awareness about ambulances and when they can be used. The rising awareness among general public increases the use of ambulance services resulting in growing fleet sizes to meet the needs. 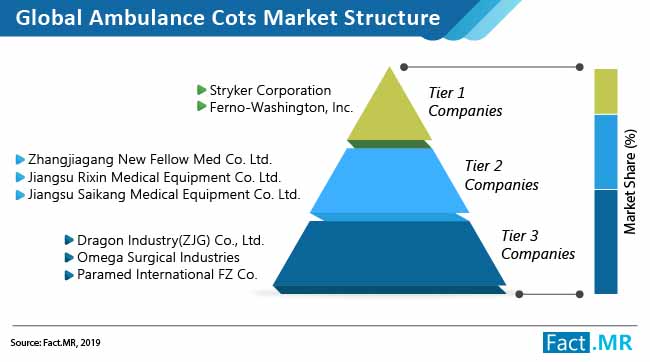 Rising Medical Tourism to Drive the Demand for Ambulance Cots

Medical tourism is a growing sector in Brazil, India, Thailand, Singapore, and others. Some of the key factors for the growth of medical tourism in these regions are high-quality facilities, English-speaking medical professionals, cost-effectiveness, and tourist attraction.

Significant investments in healthcare by government across the world have resulted in more paramedics and ambulances to respond to time-critical emergencies. Government spending on healthcare is one of the driving factors for the growth of the healthcare industry worldwide. According to the OECD data, the U.S. spent about 17.2% of GDP for healthcare.

Similarly, St. John Ambulance in Australia added 5 ambulances to expand its fleet at Casuarina Ambulance Station. With growing fleets of ambulance, the ambulance cots market will flourish during the forecast period, especially in developing nations.

How much is the global market for ambulance cots market worth?

The ambulance cots market is expected to reach us$ 223 mn

What are the key markets for Ambulance Cots Market?