Players are increasingly utilizing internet sales channels to extend their reach while requiring less financial commitment. On the demand side, the rising incidence of heart attacks, owing to patients' unhealthy lifestyle choices, is expected to expand the patient pool for the anticoagulants market over the forecast period.

Sales of anticoagulants expanded at a CAGR of 5% across the historical period ranging from 2016 to 2020. Demand for anticoagulants has increased significantly in emerging nations, owing to the financial assistance provided by central governments to renovate healthcare facilities and improve service quality.

Leading firms are utilizing research and development operations to increase the number of pipeline medicines, recognizing the anticoagulants market's strong growth possibilities. The Global Anticoagulants Market is estimated to be worth US$ 65 Bn by 2031, expanding at an 8.04 % CAGR during the forecast period.

The most common heart arrhythmia is atrial fibrillation. It is projected that 6-12 million individuals in the United States will have this disease by 2050, and 17.9 million people in Europe will have it by 2060. Atrial fibrillation is a substantial risk factor for ischemic stroke, causing a large economic burden as well as morbidity and death.

As per the National Center for Biotechnology Information, during 2017, over 3 million new instances of atrial fibrillation were detected globally. The 2017 estimated incidence rate (403/million inhabitants) was 31% higher than the 1997 corresponding incidence. The global prevalence of atrial fibrillation is 37,574 million instances, and it has grown by 33% in the past two decades.

The biggest burden is observed in nations with a high socio-demographic index; however the most recent growth occurred in countries with a moderate socio-demographic index. According to estimates, the absolute burden of atrial fibrillation may grow by more than 60% by 2050. Hence, all these factors contribute to the market growth during the   forecast period.

How do Anticoagulants Growth Prospects Appear in the U.S?

How big is the Anticoagulants Industry in Japan?

According to the World Bank, a projected 28% of Japan's total population is over 65 in 2020, with that figure predicted to increase to 40% by 2060. As a result, blood thinners such as Xarelto are widely recommended to the elderly for the treatment and prevention of blood clots. A market share worth 45% is expected for the Japanese market.

With an ageing population, demand for anticoagulants is strong, as they require surgical interventions for numerous chronic conditions. Geriatrics are more likely to have diseases such as venous thromboembolism, atrial fibrillation, and knee and hip replacement operations, increasing their risk of forming blood clots and, as a result, heart attacks and strokes.

Why is China an Emerging Market for Anticoagulants?

China is anticipated to expand at the highest rate throughout the projection period, clocking a CAGR exceeding 8% until 2031. High prevalence rate of cardiovascular diseases is spurring surgeries across the East Asian giant, paving way for high usage of anticoagulants.

According to the Lancet, nearly 4 million deaths occur due to CVDs in China annually. In an effort to mitigate the risk and reduce this burden, healthcare practitioners are advocating advanced surgical interventions. However, the risk of embolism arising from such surgeries has also increased, prompting usage of anticoagulants. 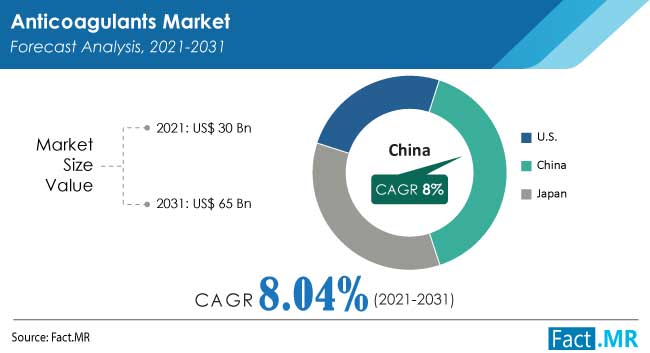 Why the Preference for NOAC/DOAC Factor X Inhibitors?

By drug class, NOAC/DOAC factor X inhibitors accounted for over 50% of total anticoagulants demand in 2019. This is attributed to increased NOAC uptake in poorer nations, as well as increased usage of NOACs over warfarin.

Hospital pharmacies are expected to account for 49.2% revenue share. This is because hospitals are the major sites for the diagnosis and treatment of many forms of bleeding problems.

As the volume of surgeries for various chronic conditions increase, episodes of embolisms post-surgery are increasing manifold. As a result, doctors highly recommend use of anticoagulants to prevent further complications in the patient.

The anticoagulants landscape is competitive and fragmented, with numerous significant competitors. As a tool to increase anticoagulant exposure, players in the anticoagulants industry are stepping forward to carry the financial burden of individuals through patient-assistance programmes.

According to Fact.MR, the anticoagulants industry is expected to reach US$ 30 Bn in 2021.

From 2016 to 2020, Fact.MR estimated the market for anticoagulants soared at 5% CAGR

From 2021 to 2031, anticoagulants demand is expected to surge at a CAGR exceeding 8%

NOAC/DOAC factor X-inhibitors are expected to be highly sought after, capturing 50% of total demand

*83 figures and 30 tables includes by FactMR