Expanding at a CAGR of 8%, the global genetic testing services market is predicted to increase from a valuation of US$ 40 billion in 2023 to US$ 87 billion by the end of 2033.

Global demand for newborn screening is projected to increase at a CAGR of 8.5% during the forecast period due to many infants being diagnosed with hyperthyroidism and other chronic disorders. Genetic tests are used to check for genetic illnesses in the human body. They come in the form of kits and panels. The chromosomes, genes, and proteins are examined as part of a medical procedure known as DNA testing.

The genetic conditions that determine any genetic disorder or disease in the patients can be suspected by genetic tests. Genetic testing aids in the diagnosis of illnesses, the severity of the disease, diagnosis to discover gene mutations, and the risk of getting the illnesses, and also enables the patient and the doctor to decide correct treatment.

The population now has the freedom to perform their own genetic testing because of technological advances. DNA testing kits may be ordered from websites such as Ancestry.com and 23andme.com and delivered right to the house. One can quickly upload the test results after getting them to websites that print out medical diagnoses and offer their analyses. As more people sign up for genetic testing online and learn more about their DNA, the business has been significantly impacted by the accessibility of genetic testing.

Without consulting their doctors, people can better understand their genetic information due to direct-to-consumer genetic testing. Consumer awareness of the connections between genetics and diseases, which supports the advancement of patients' health and precision medicine based on unique genetic profiles, is a primary driver of market growth.

Companies are working to enhance carrier status identification and customer usability for reliable genetic testing. Additionally, it can be anticipated that rising consumer use and subsequent follow-up with healthcare professionals and insurers will fuel the expansion of direct-to-consumer genetic testing.

Market expansion is supported by the rise in the frequency of chronic diseases and the local supply of advanced testing kits for specialized therapeutic fields. The increased emphasis placed on regulating genetic testing and raising public awareness about them by governments in various countries has successfully sped up their global adoption.

Which Factors are Paving the Way for Genetic Testing Service Providers?

Growing prevalence of autoimmune diseases is augmenting the demand for genetic testing services. Genetic testing services are widely used for many applications in the fields of oncology, obstetrics, and ancestry as well. These services are purported to assist clinicians and patients to identify hereditary factors leading to the outbreak of the diseases mentioned above.

“Surging Usage of Healthcare IT in Genetics”

Big data accumulation provides an opportunity to integrate and store important genetic information. The usage of healthcare IT aids in research and help take clinical decisions.

The emergence of new detection technologies in the genetic testing services market has enhanced the value of disease treatment. Manufacturers are focusing on developing techniques such as polymerase chain reaction, imaging, and microarrays with greater depth of interaction (DOI) information.

The concept of personalized medicine is that every patient is an individual who needs specialized pharmacological treatment. To increase the viability and usefulness of customized drugs for the diagnosis of diseases and disorders, large-scale drug development is required. Pharmacogenomics, often known as drug-gene testing, widely uses genetic testing. It helps in drug development and discovery.

Scientists are aware that a variety of genetic testing techniques, including cytogenetic, biochemical, molecular, and DNA sequencing, appear to provide customized disease treatments. Furthermore, it is anticipated that more patients would want genetic testing from primary care doctors, particularly healthy adults looking for early detection or prevention of hereditary disorders. This trend is anticipated to foster market expansion.

The emergence of novel testing kits as a result of new developments and the increased prevalence of genetic and chronic diseases are the two main factors driving the global market for genetic testing. The demand for genetic testing services is being fueled by consumers' increasing awareness of the availability of advanced diagnostic procedures.

An increase in the geriatric population is anticipated to fuel market expansion over the coming years. Older adults have a high risk to develop a variety of chronic conditions, which may increase global demand for genetic testing.

How is Industry Growth Being Restrained to Some Extent?

The social and ethical consequences of genetic testing and privacy & security issues with genetic data are the factors restraining market growth. The expansion of the global market for genetic testing services is constrained by strict regulatory conditions regarding the approval of new products and a shortage of skilled professionals who can analyze the data. Pricing trends show that the high cost of genetic testing equipment is hampering market expansion. 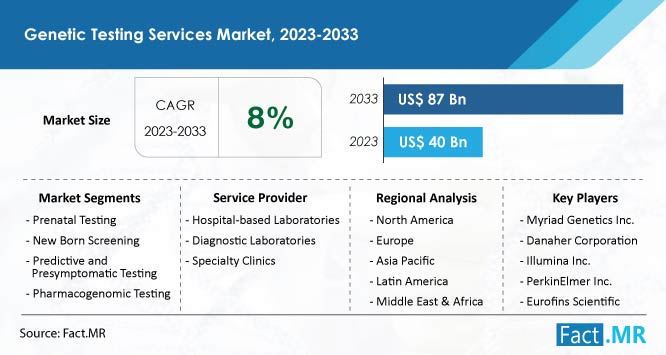 Why is North America Dominating the Market for Genetic Testing Services?

North America is an attractive market for genetic testing services with 40% share. The increased need for genetic testing to understand ancestry and the rise in demand for pre-implantation testing and in-vitro fertilization (IVF) are some key drivers augmenting market share. The rapid adoption of new technologies, the introduction of novel diagnostic techniques, and the huge demand for cancer diagnostics are driving market growth in the region.

What is the Market Outlook for Genetic Testing Services in the United States?

“Huge Demand for Personalized Genetic Testing Solutions in the Country”

Increasing prevalence of chronic and genetic disorders, huge demand for personalized genetic testing solutions, and high awareness of hereditary conditions are boosting market value in the United States. The market is projected to expand over the forecast period as a result of rising cancer incidences, proactive strategies adopted by major players, and government support for direct-to-consumer genetic testing.

How is Germany Driving Market Growth in Europe?

“Growing Awareness of Advantages of Genetic Testing among People”

Market expansion in Germany is accelerated by the introduction of reimbursement programs, surging demand for efficient treatment methods, and rapid implementation of advanced technologies in research centers. Growing awareness of the advantages of genetic testing among people and a rise in consumer spending on healthcare are the elements driving market growth in the country.

Japan is set to be the most lucrative market for genetic testing services, expected to register a robust CAGR of 8.4%.

Market growth in Japan is attributed to a rise in the geriatric population, the rapid adoption of modern genomic technologies, and the affordability of genetic testing. The market is driven by elements such as an increase in government funding for R&D, new developments in genetic testing technology, and growing awareness of the disease's early detection among individuals.

Infants are screened for particular diseases and abnormalities that can impair their ability to develop normally. Mental and physical problems as well as life-threatening illnesses can be avoided with early detection and treatment. Prenatal testing is done throughout pregnancy to find any birth defects in newborn babies.

Which Application is Likely to Contribute the Most to Market Expansion?

Based on application, the market is classified into oncology, infectious diseases, autoimmune diseases, and others. The adoption of genetic testing services in oncology is increasing due to the growing prevalence of cancer and increasing awareness of early cancer identification among people.

Genetic testing enables the identification of an individual's lifetime risk for specific cancer forms. Inherited variations and mutations in the DNA sequence, which could cause uncontrollable cell development and result in tumors or cancer, can be tested via genetic tests.

Genetic tests help in determining whether cancer runs in the family and the risk factors for cancer development in the future for people with a family history of the disease. Additionally, genetic testing is performed on individuals who do not react to chemotherapy to find out if tumors that are resistant to treatment have acquired mutations.

Global genetic testing service demand is valued at US$ 40 billion in 2023.

Adoption of genetic testing services is forecasted to increase at a CAGR of 8% through 2033.

The global genetic testing services market is estimated to reach US$ 87 billion by 2033.

*79 figures and 24 tables includes by FactMR