The glaucoma therapeutics market revenue will likely total US$ 6.6 Bn for 2021, according to Fact.MR. Overall, the market is expected to reach US$ 10 Bn by 2031, expanding 1.5x across the forthcoming decade. Demand for beta-blockers drug class will accelerate, anticipated to register a CAGR of 4.7% from 2021-2031.

According to Fact.MR, a market research and competitive intelligence provider, from 2016 to 2020, the global market for glaucoma therapeutics has grown at a CAGR of almost 2.8%. Recent advancements in therapeutic interventions, such as the adoption of minimally invasive surgical techniques, have boded well for market growth in the said historical period.

Amid the COVID-19 pandemic, the industry experienced various fluctuations, with initial prospects appearing bleak. During the first quarter of 2020, exponentially rising infection cases prompted healthcare providers to relegate non-COVID-19 surgeries to the backyard. However, certain studies recorded an over 60% increase in emergency glaucoma care, particularly across developing countries such as India.

Throughout the pandemic, emergency surgeries in the country arose 4.3x, while more non-incisional procedures and less diagnostic testing were performed to minimize post-operative visits and viral load transmission. Future growth prospects are reliant on increased funding for clinical trials for discovering novel drugs, discovery of advanced surgical interventions and enhanced government support. Hence, the market is likely to surge at a CAGR of 4.2% from 2021-2031.

Globally, glaucoma is the leading cause of irreversible blindness, elevating the burden on existing healthcare frameworks. Primary open angle glaucoma (POAG) is the predominant subtype of glaucoma, with an estimated 52.68 million adults aged 40-80 suffering from it in 2020. This number is anticipated to reach nearly 80 million by 2040, with incidence in countries such as the U.S likely to reach 6.3 million.

Recently, since May 2021, a series of new glaucoma drug trials at the University of Minnesota. In collaboration with the Mayo Clinic, the research team at the Institute for Therapeutics Discovery & Development has developed the QLS-101, a novel prodrug of the KATP channel opener levcromakalim, designed to lower episcleral venous pressure in glaucoma patients. Phase I/II clinical trials have begun, which was licensed to Qlaris Bio in 2019.

Researchers are focusing on a pathway associated with inflammation, including Transforming Growth Factors β (TGFβ). In addition, they also study signaling molecules that communicate between cells and orchestrate fibrosis and inflammation. Moreover, clinical ophthalmologists generally prefer to use local therapies over systemic ones, since it is safer and more acceptable for patients. In addition, several patents from scientists have been filed for the use of shear-thinning fluid gels as eye drops that last for extended periods after administration, both alone or in combination with other therapeutics.

Furthermore, researchers have developed a method to combat glaucoma that replaces daily eye drops and surgery with twice-annual injections to maintain pressure in the eye. For instance, Glaucoma Research Foundation, a non-profit organization, received $1.5 million in donation for a collective vision restoration project. Additional fundraising would be provided to support organizations, such as the National Eye Institute, to finance interdisciplinary research projects. The initiative will be known as the Steven and Michele Kirsch Catalyst for a Cure Vision Restoration Initiative.

What Growth Prospects Abound for Glaucoma Therapeutics in North America?

More than 3 million Americans suffer glaucoma. Majority of people with glaucoma do not exhibit any early symptoms. As a result, glaucoma therapeutics have grown in demand. In the United States, glaucoma accounts for somewhere between 50 and 70 percent of childhood glaucoma cases. It affects approximately one in every 10,000 infants under the age of four. This has led to high demand for glaucoma therapeutics on US markets.

It is estimated that 2.7% of Americans aged 40 and above are affected by open-angle glaucoma, thus creating a high demand for therapies on the market. About 3.3 million Americans age 40 and older are affected by blindness or low vision. In 2020, around 80 million individuals are estimated to have glaucoma globally, and it is expected that this number will reach over 111 million by 2040.

As a result of direct costs and productivity losses associated with glaucoma, the U.S. economy is losing more than $2.86 billion every year. There are over one million cases of glaucoma in the United States every year, with African Americans and Hispanics being the most affected in these regions. According to Fact.MR, around 30% of global revenue will be contributed by North America.

Europe to Emerge as a Pioneer in Open Angle Glaucoma Therapeutics?

In Western Europe, glaucoma appears to be the second most common reason for irreversible blindness, after age-related macular degradation. A study conducted worldwide observed that 2.93% of persons aged 40 to 80 years have glaucoma in these regions. A prevalence rate of 2.51% among those aged 40 to 80 is associated with open-angle glaucoma.

Additionally, in Germany, the majority of people suffer from open-angle glaucoma. The availability of surgical treatment for cataracts in industrialized countries has decreased the risk of acute angle-closure and narrow-angle glaucoma. The prevalence of open-angle glaucoma increases as one age, with 0.4% diagnosed in persons of European ancestry aged 40–44, with 2.7% in those aged 70–74, and 10.0% over 90. A market share worth 30% is anticipated by Fact.MR.

Laser treatment for glaucoma has recently been accepted as first-line therapy by the European Glaucoma Society (EGS), placing it on an equal footing with eye drops for treating the condition. Numerous laser manufacturers will be able to increase their penetration into the European market. The EGS guidelines aim to standardize practice within the European Union by providing recommendations for diagnosing and treating glaucoma.

How is Increasing Funding for Research Collaborations Enhancing Glaucoma Therapeutics in Asia?

Growing government funding in the medical industry has increased the market's demand for glaucoma drugs. As international firms continue to expand their operations there is a greater demand for glaucoma treatments. Fact.MR expects Asia to account for 25% of global revenue share in the market.

Increasing foray for advanced therapies, economic growth, and increased availability of drugs are leading to a higher demand for eye treatments in these regions. The number of people affected by POAG and PACG is expected to increase significantly in Asia by 2020. As a result, glaucoma cases in Asia are greater than in other regions. In addition, Asia will still have the highest number of PACG and POAG patients in 2040, with a growth of 18.8 million (79.8%) and 9.0 million (58.4%), respectively.

Chinese firm Arctic Vision announced a new research collaboration with the University of Hong Kong’s (HKU) Ophthalmology department intending to discover and develop new neuroprotective treatments for glaucoma. Through their alliance, Arctic Vision and HKU will search for new medications with a new mechanism of action for the treatment of glaucoma. The partners will focus on controlling mitochondrial activity as a neuroprotective approach for glaucoma and creating a microRNA-based gene treatment to protect the optic nerve in this patient population. 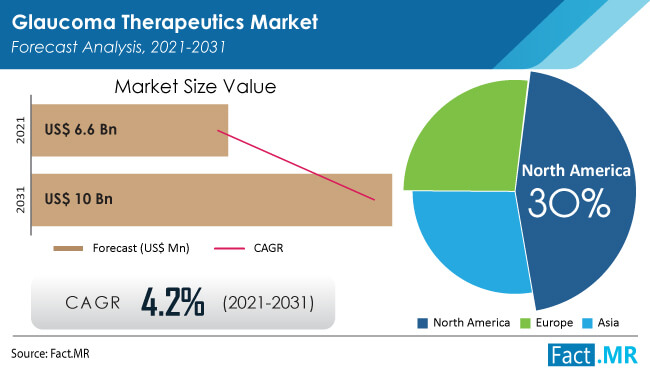 Will Beta Blockers be the Primarily Consumed Glaucoma Therapeutics Drugs?

Patients are most likely to incline towards beta blockers, as they are relatively less expensive. To minimize the risk of systemic side effects. Combination medicines with beta blockers will grow at a CAGR of 4.7% during the forecast period.

Various blockers such as betaxolol, alpha-adrenergic agonists, carbonic anhydrase inhibitors, parasympathomimetics, epinephrine, and hyperosmotic agents are being used to treat glaucoma diseases in the medical field. Increasing demand for eye drops as treatment has grown demand for beta-blocker eye drops in the market.

Ophthalmic Clinics to Emerge as Primary Point of Contact for Availing Glaucoma Therapeutics?

An aging population and the need for new treatment methods for patients, it has raised the demand for glaucoma therapeutics in ophthalmic clinics. For the management of chronic and acute eye diseases, innovative approaches must be employed to provide safe and sustainable services, which has led to an increase in the demand for therapeutics in ophthalmic clinics.

Strategic collaborations enable manufacturers to increase production and meet consumer demand which will increase revenue and market share. New products and technologies will enable end-users to benefit from products that are eco-friendly by nature. Key developments in the market are as follows:

How much is the glaucoma therapeutics market worth?

The global glaucoma therapeutics market will be worth US$ 6.6 Bn by 2021-end

What was the last 5 years market CAGR

How much is the market likely to be valued by 2031?

By how much is the global market for glaucoma therapeutics expected to surge?

What are the key trends in glaucoma therapeutics in the global market?

Who are the top 5 players in the glaucoma therapeutics market?

How opportunistic are growth prospects across North America?

As per Fact.MR, North America will constitute 30% of global glaucoma therapeutics demand

What are the anticipated expansion prospects across Europe?

In Europe, glaucoma therapeutics will comprise 30% of the market share

Will Asia be an opportunistic market for glaucoma therapeutics?

Yes. Asia will likely yield a revenue share worth 25% in the global market for glaucoma therapeutics

Which drug category is likely to be the most consumed?

Beta blockers will likely emerge as the most consumed glaucoma therapeutic drugs, registering a 4.7% CAGR until 2031