A recent report on the market by Fact.MR provides thorough analysis of the global industry, taking into account vital factors and shifted demand-supply patterns for the forecast period of 2021 to 2031. According to the report, the United States, Germany, France, India, Japan, and a few other countries will remain highly lucrative markets for minimally invasive surgeries and MIS techniques.

Demand for minimally invasive surgeries has grown rapidly over the past years with rise in inclination towards advanced surgical options that have least side effects instead of conventional ones. With advancements in medical technologies, suppliers of minimally invasive surgery equipment experienced considerable growth in revenue over the past years from 2016 to 2020.

As key end users such as ambulatory surgical centers, clinics, and hospitals are expanding steadily, requirement for various minimally invasive surgical equipment is growing exponentially. Furthermore, increase in cases of orthopedic, urological, and other disorders is set to aid market growth further over the coming years.

How is Growing Demand from Clinical Centers and Hospitals Spearheading Market Growth?

Minimally invasive surgery equipment is highly sought-after in clinics and hospitals, owing to surge in the adoption of advanced surgical procedures. Furthermore, incorporation of cutting-edge technologies such as robotics, Artificial Intelligence (AI), and others is spearheading demand growth from these sectors.

As stated in a report published by the European Commission (EC) on 3rd March 2021, general government expenditure in the European Union (EU) on health amounted to EUR 983 billion or 7% of the Gross Domestic Product (GDP), as in 2019. As these figures are subject to increase further, demand for minimally invasive surgeries is expected to rise rapidly in the foreseeable future.

What are the Key Challenges Faced by Minimally Invasive Surgery Equipment Manufacturers?

There are a few disadvantages of minimally invasive surgeries that throw up challenges for industry players, such as-

However, with continuous R&D activities, manufacturers are expected to overcome these challenges over the coming years. 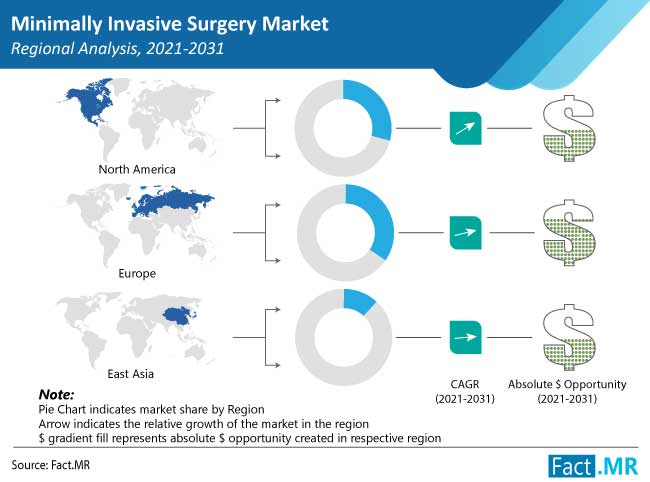 What’s Driving the Market for Minimally Invasive Surgeries in the United States?

The United States is the leading country in North America’s market for minimally invasive surgeries, and is set to maintain its lead throughout the forecast period. Highly advanced medical and hospital sector is driving sales in the country.

According to a report titled “Industries at a Glance” by Bureau of Labor Statistics, the medical and hospitals industry is the one of the best prospect industries, while its medical technologies sector is the largest in the world. As stated in the report, employment in this sector in thousands grew to 5,174.8 in December 2020, and is subject to grow further. This indirectly indicates the new opportunities for minimally invasive surgery equipment suppliers in the United States.

Germany is the leading market in Europe, and is forecast to expand further over the coming years. Advancements in key end-use sectors coupled with increase in inclination towards these surgeries are boosting the prospects of market players Germany.

Healthcare expenditure in Germany was EUR 369 billion in 2017, the highest among the European Union (EU) member states. The Germany healthcare industry is driven by technical advancements and growing expenditure by the government on various healthcare projects. This, in turn, is creating new avenues for minimally invasive surgery stakeholders in Germany.

Will China Remain in the Spotlight for Suppliers of Minimally Invasive Surgery Equipment?

Driven by the advanced medical and hospitals industry and growing manufacturing sector, China is the hotspot for players to minimally invasive surgery robotic companies. According to Fact.MR, China is expected to remain at the forefront in the Asia Pacific market through 2031.

According to a report titled “China- Healthcare”, published by the International Trade Administration, China is the world’s second-largest healthcare industry. As stated in the report, in 2019, China had 34,354 hospitals, which offered over 6.8 million beds and received 3.84 billion patient visits. As per the report, in 2018, China medical devices sector accounted for 5.7% of China’s Gross Domestic Product (GDP), which grew to around 7% in 2020. This explains why market players are focusing on China in order to raise their profit margins.

How Big is the Opportunity in India for Minimally Invasive Surgery?

India has emerged a highly potential market for minimally invasive surgery, and is set to sustain its position throughout the forecast period. Growing demand from hospitals, clinics, and other key end-use industries and highly developed manufacturing sector are fueling sales in India.

According to a report published by Invest India, India’s healthcare industry grew at close to 23% CAGR during the years 2015 to 2020. As stated in the report, the hospitals industry in India is expected to reach US$ 132 billion by 2023, while the diagnostics industry in the country is currently valued at US$ 4 billion. These statistics indicate the opportunities on offer for industry players in India.

Which Procedure of Minimally Invasive Surgery is the Most Preferred?

Presently, laparoscopic surgery is a key segment as far as minimally invasive surgery is concerned, in terms of procedure, and is anticipated to remain dominant throughout the forecast period.

This segment is gaining popularity owing to its various advantages, such as,

Other key segments in terms of procedure are robotic surgery, endoscopic mucosal resection, and others.

Which Disorder is Spurring Demand for Minimally Invasive Surgery?

Currently, orthopedic is the leading segment in terms of disorder, and set to maintain its lead throughout the forecast period. With growing prevalence of various orthopedic diseases such as osteoarthritis, carpal tunnel syndrome, and others, this segment is significantly catering to industry growth.

Other key segments in terms of disorder are cosmetic, gynecological, urological, and others, which are complementing market growth.

With the competition getting tougher, players in the minimally invasive surgery market are diversifying their products further.

A recent study by Fact.MR on the minimally invasive surgery market offers a 10-year forecast from 2021 to 2031. The study analyzes crucial trends that are currently determining market growth.

This report explicates on vital dynamics, such as the drivers, restraints, and opportunities for key market players along with key stakeholders and emerging players associated with minimally invasive surgery. The study also provides the dynamics that are responsible for influencing the future status of the market over the forecast period.

A detailed assessment of the value chain analysis, business execution, and supply chain analysis across regional markets has been covered in the report. A list of prominent companies operating in the minimally invasive surgery market, along with their product portfolios, enhances the reliability of this comprehensive research study.

A comprehensive estimate on the market has been provided through an optimistic as well as a conservative scenario, taking into account sales during the forecast period. Price point comparison by region with global average price is also considered in the study.

Country-specific valuation on demand for minimally invasive surgery has been offered for each regional market, along with market scope estimates and forecasts, price index, and impact analysis of the dynamics of prominence in regions and countries. For all regional markets, Y-o-Y growth estimates have also been incorporated in the report.

Detailed breakup in terms of value for emerging countries has also been included in the report.

Secondary resources referred to by analysts during the preparation of the market study include statistics from governmental organizations, trade journals, white papers, and internal and external proprietary databases. Analysts have interviewed senior managers, product portfolio managers, CEOs, VPs, marketing/product managers, and market intelligence managers, all of whom have contributed to the development of the research report as a primary resource.

Which are the top companies manufacturing minimally invasive surgery equipment?

Which are some of the lucrative markets for minimally invasive surgery?

The United States, China, India, Japan, Germany, the United Kingdom, France, Canada, Italy, and a few others are lucrative markets for the supply of minimally invasive (MIS) tools and instruments, and are expected to dominate throughout the forecast perio

Presently, orthopedic is the most lucrative segment in terms of procedure, and is expected to remain dominant over the forecast period of 2021 to 2031.

Currently, hospitals account for high sales of minimally invasive surgery equipment, and are predicted to sustain this position throughout the forecast period.

Which are the top companies manufacturing minimally invasive surgery equipment?

Which are some of the lucrative markets for minimally invasive surgery?

The United States, China, India, Japan, Germany, the United Kingdom, France, Canada, Italy, and a few others are lucrative markets for the supply of minimally invasive (MIS) tools and instruments, and are expected to dominate throughout the forecast perio

Presently, orthopedic is the most lucrative segment in terms of procedure, and is expected to remain dominant over the forecast period of 2021 to 2031.

Currently, hospitals account for high sales of minimally invasive surgery equipment, and are predicted to sustain this position throughout the forecast period.