Market growth of methyl tertiary-butyl ether is mainly due to its wide usage as a fuel preservative in gasoline engines and rising application in several end-use industries.

Methyl tertiary-butyl ether is a flammable liquid used as an unleaded gasoline additive, and increases octane and oxygen levels in gasoline while reducing emissions. It is derived from methanol and isobutylene, and is blended with gasoline to produce cleaner fuels for use across several developing countries.

Adoption of methyl tertiary-butyl ether (MTBE) is banned in some developed countries, but its growth is anticipated to remain steady in developing nations such as China, Mexico etc. This chemical compound is the second-most employed gasoline oxygenate and is highly effective as an octane enhancer, and comes with cost benefits.

All these factors are likely to provide a gain of 123 BPS to the MTBE market during the forecast years of 2022-2032. 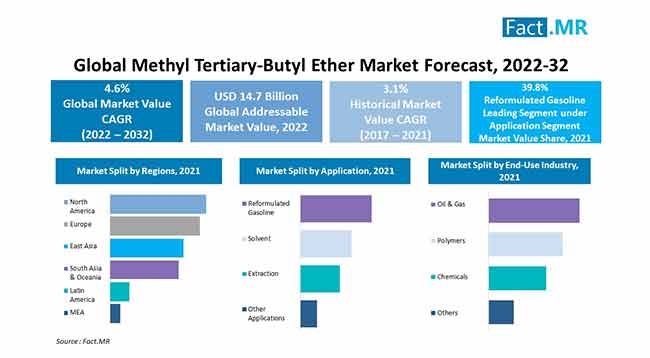 This image provides market share analysis of application, end-use industry, and region in a nutshell. Under the application segment, reformulated gasoline dominated the market by holding 39.8% share in 2021.

What Lies Ahead for Methyl Tertiary-Butyl Ether Manufacturers?

MTBE, or methyl tertiary-butyl ether, is adopted widely as a fuel additive in gasoline engines because of its property of high oxygen content, coupled with greater adoption by refining companies due to its blending characteristics and economic viability.

MTBE is used in industrial engines to enable complete combustion of fuel, leading to reduction in knocking in the engine, thus improving machinery lifespan in the automotive industry and in medical applications for dissolving gallstones.

Market demand is likely to increase 1.6X during the forecast years as it is used for processing to extract isobutylene for manufacturing butyl rubber, poly-isobutylene, methyl methacrylate etc., which, in turn, find enhanced application in several end-use industries such as automotive, industrial, electronics, etc.

However, sometimes, gasoline leakages containing MTBE lead to groundwater contamination, due to which, stringent regulations have been implemented. This is likely to restrain market demand by 0.4X over the decade.

MTBE is a replacement of aromatics utilized in gasoline due to its availability as an affordable feedstock and its property of reducing vehicular emissions. It is also a cost-effective replacement for toxic fuel components such as olefins, benzene, lead, and sulphur.

In addition to this, oxygenate production is seeking greater adoption of bio-MTBE, which utilizes bio-methanol from renewable sources as it is considered as an attractive compound in biofuel landscape. Therefore, devoid of any compatibility issues, bio-MTBE holds potential usage over the coming years, supporting market growth by ~24% during the forecast years of 2022-2032.

How is the Methyl Tertiary-Butyl Ether Market Progressing in North America and Europe?

Why is Asia Pacific a Huge Market for Methyl Tertiary-Butyl Ether?

The East Asia and South Asia & Oceania methyl tertiary-butyl ether markets are expected to expand at 5.2% and 5.6% CAGRs, respectively, during the forecast years of 2022-2032.

Asia Pacific is likely to lead the market over the coming years due to India and China being major MTBE consumers because of the presence of a large number of vehicles in these countries. Along with this, environmental protection policies here are relatively less stringent as compared to other countries, which bodes well for MTBE manufacturers’ penetration in the Asia Pacific region.

Why Does Application of MTBE in Reformulated Gasoline Need the Focus of Market Players?

The methyl tertiary-butyl ether market, under application, is segmented into reformulated gasoline, solvents, extraction, and other applications.

Reformulated gasoline holds 39.8% of overall market share. The segment is projected to register 5.4% CAGR as it has a great oxygen content raising property, which is trending globally.

Also, the reformulation of gasoline with the help of MTBE as a fuel additive is seeing extensive adoption in the oil & gas and marine sectors.

Under the end-use industry segment, the methyl tertiary-butyl ether market is segmented into polymers, chemicals, oil & gas, and others. The oil & gas sector dominates the market by holding 36.7% market share.

Escalating demand for gasoline and additives is fueling market growth of this segment. The segment is likely to be dominant during the forecast years and expand at 5.2% CAGR on the back of the industrial sector accounting for a large amount of gasoline, creating demand for MTBE as a fuel additive.

Polymers and chemicals, which hold 29.8% and 23.2% market share, respectively, are poised to register 4.8% and 4.4% CAGRs during the forecast years.

The global methyl tertiary-butyl ether market is highly competitive and fragmented because of the presence of numerous regional and international players. Mergers & acquisitions, expansions, partnerships, and collaborations are being adopted by key players in the industry.