Increasing focus on interior and exterior decorations in commercial, industrial, and other industries is pushing the supply-demand curve for ceiling tiles upward across the globe. With exponential growth of the building and construction industry, ceiling tile manufacturers are flourishing due to the rise in requirements.

While ceiling tile suppliers have been experiencing surge in demand for laminated ceiling tiles, rapidly increasing demand from the residential, commercial, hospitality, and other sectors is set to further fuel sales over the coming years.

A new study by Fact.MR offers a thorough analysis of the global ceiling tiles market. It also provides the market trends, potential, and demand-supply trajectories around the world, where demand is seen to be high in North America, Europe, and Asia. The report also tracks the impact the COVID-19 pandemic is having on the market, and what projections for the future look like.

With fast-paced advancements in the building and construction industry, demand for various interior and exterior decoration elements has risen substantially in the past years. Robust growth in sectors such as hospitality, residential, commercial, and others has further propelled demand for ceiling tiles over the past years, where the market has expanded at a CAGR of around 8.5% from 2016 to 2020.

While elevating home prices and steadily growing GHDI across emerging countries are prompting home owners to invest in home decoration, remodeling, and renovation, ceiling tile manufacturers are bringing in new products suitable for a broad range of applications. As a result, the ceiling tiles market outlook is changing fast. According to Fact.MR, the global ceiling tiles market is forecast to expand at close to 10% CAGR during the forecast period of 2021 to 2031.

How is Steady Growth in Construction Fuelling Sales of Ceiling Tiles?

With the steadily growing building & construction industry, requirement for ceiling tiles is increasing fast across the globe. As per a report published by the The Construction Association of America, the construction industry is a major contributor to the United States economy, with more than 680,000 employers and with over 7 million employees creating US$ 1.3 trillion worth of structures each year.

All in all, a progressing construction sector across the world bodes well for the growth of the ceiling tiles space.

Why is the Popularity of PVC Panels Increasing?

PVC ceiling panels have gained wide popularity owing to their exclusive properties such as lightweight, cost-effective, and flexible in terms of design and application in the residential, commercial, and other sectors. PVC or polyvinyl chloride, being the world’s third-most widely produced synthetic plastic polymer, is highly preferred by ceiling tile manufacturers due to its hassle-free handling and installation without the requirement of any special tools.

As demand for various PVC ceiling tiles, such as plain ceiling, textured ceiling, and others is spiraling, manufacturers are leveraging this trend to increase their revenue and profit.

What are the Key Challenges Faced by Ceiling Tile Manufacturers?

While ceiling tiles are an integral part of interior designing, they are not affordable for many people and small to medium residential complexes and institutions. Various types of installation of ceiling tiles such as drop/suspended, surface mounted, and others are often time-consuming and require regular maintenance that incurs extra cost.

Furthermore, the outbreak of the COVID-19 pandemic in 2020 has taken a toll on the building, construction, and renovation industry, resulting in decline in demand for ceiling tiles. With the sudden outbreak of the pandemic, consumers’ purchasing patterns or inclination towards various services such as interior decorations have changed, as focus shifted more towards the emergency situation.

However, the market has already started recovering with the diminishing effect of the COVID-19 pandemic. As key sectors such as residential, industrial, and others are growing once again, ceiling tile manufacturers are expected to witness higher revenues over the coming years. 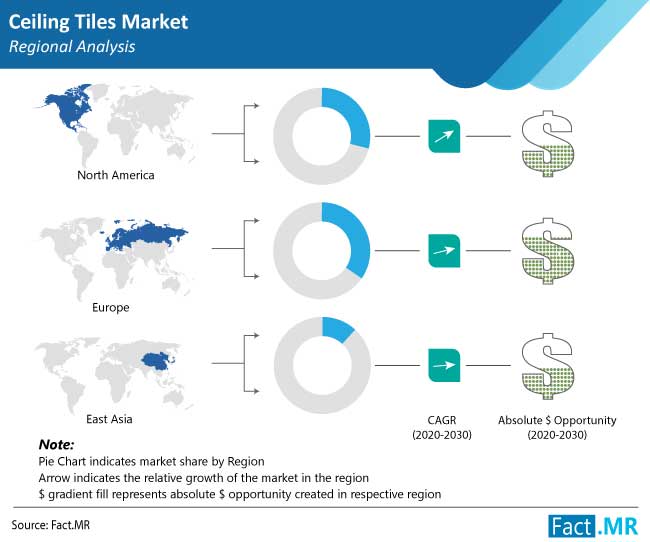 Why are Ceiling Tile Manufacturers Eyeing the United States?

As per the Global Data United States published in 2019, in the U.S., currently, over 4,700 commercial projects are in the construction pipeline, which are worth more than US$ 1.3 trillion. This gives a glimpse of the high growth scope of the ceiling tiles industry in the country.

What Makes Canada a High Potential Market for Ceiling Tiles?

Canada has emerged as another lucrative market for ceiling tiles. Surge in demand for ceiling tiles in highly developed residential, industrial, institutional, and other sectors is boosting the revenue of ceiling tile suppliers in Canada. As per the Canada Industrial Production Index Growth report published by the CEIC Organization in 2020, Canada’s industrial production has grown steadily over the past decade, except a few years, while the average growth rate has been 3.4% from Jan 1958 to March 2020.

As per the International Monetary Fund (IMF) Analysis, Canadian economy growth in 2020 was nearly 1.7%, which was more than 1.5% in 2019, owing to the potential commercial sectors. As stated in its report, with 75% of Canada’s exports going to southern neighbors, the commercial sectors are set to progress further.

Why is Germany Leading the Ceiling Tiles Market in Europe?

Germany, being the epicenter of the European ceiling tiles market, is highly lucrative for both, suppliers and manufacturers. According to the Germany Trade and Investment (GTAI) report, Germany is Europe’s leading construction market and home to the continent’s largest building stock.

Why is India a Heavyweight for Ceiling Tile Suppliers?

India is expanding the fastest in the world’s fastest-growing ceiling tiles market APEJ (Asia Pacific without Japan). Rapid growth of the commercial sector coupled with growing number of manufacturing hubs is boosting growth in India. As per data revealed by the National Investment Promotion and Facilitation Agency, the commercial sectors in India is growing exponentially, while India is world’s 4th largest vehicle market and 5th largest market in terms of domestic and international aircraft passengers. This is indirectly raising demand for ceiling tiles from the commercial sector.

According to the Invest India Report, India is the 5th largest exporter of textiles and apparel, and ranks 3rd in WTTC tourism and hospitality. All these factors are acting as growth drivers for the ceiling tiles market in India.

PVC, being cost-effective, lightweight, and suitable for various patterns and designs of ceiling tiles, is a highly sought-after material by manufacturers. As PVC ceiling tiles have wide applications in industrial, residential, institutional, and other sectors, manufacturers are adopting them even more to increase their sales footprint.

Other key segments such as aluminum, fiber glass, steel, and others are expected to bolster market growth further over the coming years.

Presently, laminated ceiling tiles are highly lucrative in terms of. This form of ceiling tiles is appropriate for long-term usage without the overhead of frequent maintenance or cleaning, and hence, highly preferred in diverse sectors, from residential to industrial.

Which Application of Ceiling Tiles is Fuelling Sales?

Other key applications of ceiling tiles are hospitality, commercial, institutional, and industrial.

The ceiling tiles market is evolving fast, which, in turn, is making the competition fiercer for key players. In order to capitalize on the upcoming opportunities, key market players have started launching a wide variety of products.

Some of the top companies competing in the global ceiling tiles market are Armstrong World Industries, Inc., Saint-Gobain S.A., USG Corporation, and others.

The United States, Canada, Germany, the United Kingdom, China, France, Italy, India and a few others are lucrative markets for ceiling tiles.

PVC, aluminium, fiber glass, and others are highly sought-after in this market space.

Presently, drop/suspended is the leading segment in terms of installation in the global ceiling tiles market.

*126 figures and 60 tables includes by FactMR