According to the alpha emitters market report by Fact.MR, a market research and competitive intelligence provider, the global market is valued at US$ 1 billion in 2022 and is expected to surge ahead at an astounding CAGR of 21% to reach US$ 6.7 billion by the end of 2032.

A very important role is played by alpha emitters in the therapy of cancer. There are significant distinctions between this discipline of nuclear medicine and other fields due to the characteristics of alpha emitters. Alpha particles have been significantly taken into consideration in medical research due to their limited range and high LET (deposit energy in a unit length of their passage).

High atomic number elements such as radium, uranium, and thorium experience alpha decay. These elements' nuclei contain a lot of neutrons, which allows for the emission of alpha particles. Because alpha particles are sluggish and relatively heavy, they have little penetration strength and can be stopped by a piece of paper.

It is well known that alpha particles can significantly damage tumour cells. They directly harm the DNA of the cell in an irreparable way, which results in cell death.

However, the alpha particle's range of motion in tissue is relatively constrained. Consequently, using alpha particles as a locally delivered therapy for solid tumours was not possible until now.

?To get over the short-range restriction of alpha particles, the Alpha DaRTTM technology uses the diffusion of atoms that emit alpha particles into the tumour tissue. The extensive region that alpha radiation may cover makes it possible to potentially treat the entire tumour.

The Alpha DaRT method relies on tiny, incredibly precise doses of radioactive radium-224 attached to metal sources placed inside the tumour. The short-lived radioactive atoms are released when radium-224 decays and disseminate throughout the tumour. These atoms produce short-range alpha radiation, which quickly damages and kills cancerous cells.

The substantial and sophisticated research and development efforts being carried out in the field of cancer therapy are the main factors driving the growth of the alpha emitters market. This is related to the emerging understanding of targeted alpha emitters' capacity to kill cells.

In accordance with this, the market is being stimulated by the increasing frequency of different types of cancer among the populace. Additionally, a bright market for alpha emitters is being created by the growing senior population, which is sensitive to several cardiac and cancer disorders.

Furthermore, increased use of targeted anticancer or alpha therapy (TAT) in healthcare institutions is generating more opportunities in the alpha emitters market.

Why are Sales of Alpha Emitters Rising So Rapidly?

Demand for alpha emitters is projected to rise as a result of rising consumer knowledge of the targeted alpha emitter's potential advantages and a large patient population suffering from various malignancies, including ovarian, pancreatic, lymphoma, melanoma, and others.

Furthermore, the application of targeted anticancer or alpha therapy in the treatment of cancer is expanding, as alpha particles have significance in targeted therapy due to their extraordinarily high capacity to kill cells.

As a result, it is anticipated that there would be a rise in the need for radiopharmaceuticals to treat cardiovascular and cancer-related disorders.

As more chronic diseases are being treated with alpha-targeted therapies, key manufacturers in the alpha emitters market are becoming more aware of their potential benefits. Short-range, high-efficiency α-particle radioimmunotherapy is an innovative and promising therapeutic strategy. Targeted therapy benefits from the very high cell-killing capacity of α-particles.

What Should Manufacturers of Alpha Emitters Be Aware Of?

Clinical research and translational studies are hampered by regulatory rules. For example, the FDA in the United States regulates all pharmacologic agents, including diagnostic radiopharmaceuticals and radiotherapies.

Similar to this, radiopharmaceuticals go through particular regulatory and approval processes worldwide and are subject to increased scrutiny. This may hinder the sales growth of alpha emitters. 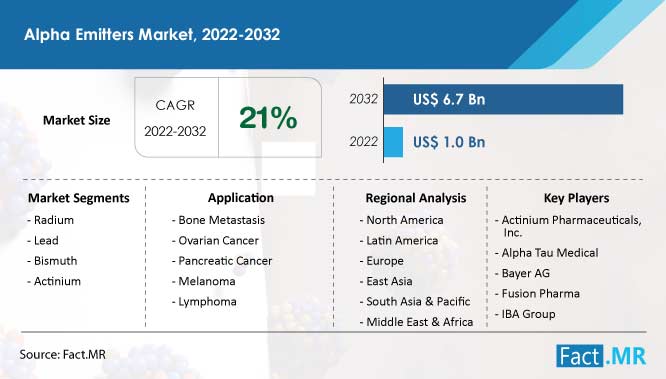 Which Region is Expected to Lead Global Sales of Alpha Emitters?

Currently, North America dominates the global alpha emitters market and it is anticipated that this dominance will continue throughout the forecast period as well due to the rising cardiological and cancerous disorders in the region.

Cancer is the second-largest cause of death and morbidity in Europe. This creates wide opportunities for the manufacturers of alpha emitters during the forecast period.

Rise in the adoption of innovative products and an increase in the prevalence of cancer in developing countries such as China, Japan, and India are expected to fuel the sales growth of the Asia Pacific market.

What Makes the U.S. a Leading Market for Alpha Emitters in North America?

One of the most common causes of chronic illness in the United States is cancer.

The oncology market in the United States is expanding, which is fueling the demand for alpha emitters. This number is anticipated to rise significantly in the coming years.

How is Demand for Alpha Emitters Progressing in European Countries?

As there is high demand for alpha emitters from nuclear medicine and radiopharmaceutical applications, Germany holds an impressive share in the Europe alpha emitters market, followed by France, Italy, the United Kingdom, and Spain.

Due to the presence of numerous large and small businesses with comparable product offerings, the market for alpha emitters in European countries is very competitive. To raise their market shares and gain a firm presence in the European market, these organisations employ a variety of tactics such as agreements, acquisitions, market developments, website launches, marketing and promotional activities, and technological advancements.

Why is Demand for Alpha Emitters High for Ovarian Cancer Treatment?

The main market participants are concentrating on creating cutting-edge radionuclides for the treatment of various forms of ovarian cancer.

The businesses are examining the potential of this cutting-edge strategy for the treatment of cancer using Soricimed's TRPV6 cancer receptor-targeting peptides and Orano Med's special radioactive alpha emitter, lead-212 (212Pb).

Radioimmunotherapy is used as a locally administered adjuvant therapy for ovarian cancer. Trials have examined the use of non-specific IP radiation, moving-strip EBRT, or total abdominal EBRT with colloid preparations of Au-198 or P-32 as adjuvant treatments.

Targeted alpha therapy using shorter wavelengths and higher LET has shown promise in the therapeutic process. Projection forecasts indicate that this trend will continue to expand in the coming years.

There are only a few significant companies in this less-competitive alpha emitters sector.

The global alpha emitters market currently accounts for a valuation of US$ 1 billion.

Worldwide demand for alpha emitters is projected to reach US$ 6.7 billion by 2032.