A newly-published analysis of the alumina slurry market reveals that the global market experienced year-on-year (YoY) growth of 7.2% to reach US$ 489.2 million in 2021.

As per the latest research report by Fact.MR, a market research and competitive intelligence provider, global alumina slurry market value is set to touch US$ 1.2 billion by 2032, increasing rapidly at 8.5% CAGR over the decade.

Growth of the global alumina slurry market is being driven by the semiconductor sector. Increased sales of smartphones and tablets have driven the demand for semiconductors worldwide. Today, practically all electronic devices and goods use semiconductors and microchips, which require precise processing.

A vital ingredient in the production of semiconductors, wafers, and microchips is alumina slurry, which accounts for a huge chunk of revenue in the CMP slurry market.

According to the most recent market report by Fact.MR, a supplier of market research and competitive information, the market value for alumina slurry increased at a CAGR of 6.7% over the past four years.

Demand for chemical polishing is being driven by an increase in semiconductor production globally and the use of more sophisticated fabrication methods. Over the forecast period (2022-2032), the market for alumina slurry is anticipated to expand quickly at a CAGR of 8.5%.

Worldwide demand for alumina slurry, which finds usage across diverse end-use verticals such as electronics and automobiles, is expected to create an absolute dollar opportunity of US$ 705.7 million by 2032. 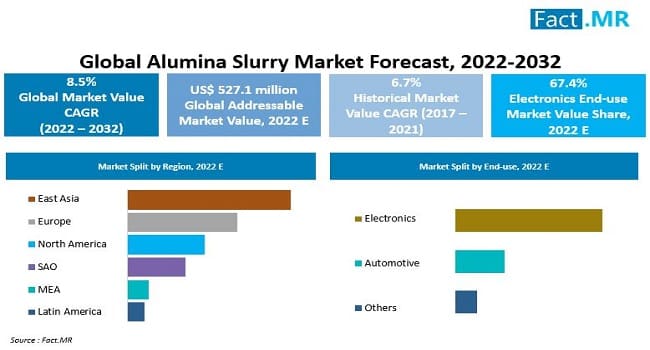 With improvements in device production, there will certainly be a greater need for novel alumina slurry solutions. Slurry solutions that can give error-free planarization with a reliable CMP process are required because of the ever-increasing level of complexity in the fabrication of electronic devices.

Modern computers, smartphones, flat-screen displays, and other electrical devices can process data at rapid speeds, thanks to semiconductors, which is only possible with efficient CMP processing. In addition, shifting chip demand is pressuring the market to adapt and create new productivity solutions. Big data, cloud computing, and artificial intelligence (AI) are all growing, giving chipmakers new development alternatives as well as the chance to boost their efficiency.

The most recent iterations of logic and memory device nodes demand the best polishing and planarization techniques available, which, in turn, is poised to escalate the demand for alumina slurry, one of the largely used polishing materials.

Alumina slurry has been useful in the grinding and polishing applications of automobile chassis in the recent past. However, it has started to become one of the vital raw materials; newly released alumina slurry coatings being developed as a cure for atmospheric corrosion, erosion, cathodic corrosion, and thermal oxidation, to name a few.

Moreover, in the recent past, rising demand for electric vehicles that use a large number of sensors and motherboards is expected to escalate the demand for alumina slurry, which is used during both, the manufacturing as well as repair/servicing of these vehicles from time to time.

Owing to this reason, alumina slurry demand from the automobile sector is set to create an absolute $ opportunity of US$ 705.7 million by 2032.

Why is China a Prominent Market for Alumina Slurry?

China has remained one of the largest semiconductor manufacturing bases in the world, alone accounting for one-fourth of the entire semiconductor market. Out of all the companies operating in the country, U.S. firms account for over 50% of all the revenue generated from this industry, which showcases the dominance of U.S.-based firms in the electronics industry in China.

China is globally recognised for producing electronics and smart products on an enormous scale; the electronics industry has been the foundation of success. China has a high attractiveness score because of its low labour cost and big client base. Chinese manufacturers strive to create cutting-edge products and parts locally so they can easily access domestic markets despite fierce competition.

Besides, the East Asian electronics and smart device market is seeing less rivalry due to the quick commercialization of new products. An aggressive and risk-taking policy is followed by manufacturers who increase product features while lowering pricing.

How is the U.S. Market Benefiting Alumina Slurry Manufacturers?

As of 2021, nearly 80% of all semiconductor wafer manufacturing taking place in the U.S. is undertaken by U.S.-origin players who have set up their bases in the country.

As per statistics, U.S. consumers spent around US$ 487 billion on consumer electronics in 2021, with smartphones accounting for nearly 14.2% of the total market share in the country, amounting to US$ 73 billion.

Such high spending on consumer electronics by consumers regularly, not only on smartphones but also on other electronic goods such as laptops, televisions, and smart home accessories, to name a few, has consistently escalated the demand for advanced semiconductors. This trickles down to demand escalation for alumina slurry being used in semiconductor manufacturing.

The North American market is anticipated to expand at a CAGR of 8.5% during the forecast period to reach US$ 205.9 million, with the U.S. alumina slurry market set to surge at a CAGR of 8.7% and expand 2.3X its current valuation by 2032.

Which Alumina Slurry End Use is Generating High Revenue?

Out of the end uses considered in the scope of the study, semiconductor manufacturing has remained a vital revenue generator in the alumina slurry market accounting for over 67% share in 2021. Automotive end use has been a close second accounting for one-fourth of the market share and is expected to grow at a higher CAGR of 9.6% through 2032.

Demand for alumina slurry will be boosted over the coming years by the growth of the worldwide electronics industry at a CAGR of 8.7% during the study period.

Which Application Surface Has Emerged as the Target Segment for Alumina Slurry Suppliers?

Alumina slurry has remained the go-to solution for polishing a variety of materials, including ceramics, C-plane sapphire, ferrous metals, and aluminium, to name a few.

Out of all the segments considered in the scope of the study, ceramics is poised to account for a vital chunk of the market revenue, accounting for nearly half of the demand as of 2021.

Manufacturers are working harder to increase the efficiency of their products to handle the rapidly expanding number of non-metal and metal CMP processes. At the same time, focus is being placed on lowering process costs and achieving error levels close to zero.

How much is the alumina slurry market currently worth?

At what CAGR is demand for alumina slurry expected to increase?

Alumina slurry sales are anticipated to increase at a CAGR of 8.5% through 2032.

How has the market for alumina slurry performed over the last four years?

Who are the leading alumina slurry manufacturers?

How is the East Asia alumina slurry market faring?

East Asia is estimated to hold around 40.8% share of the global alumina slurry market by 2032.

Aluminium Potassium Sulphate Market to grow at a steady rate during the forecast period, 2020-2030. ...

The aluminium clad printed circuit board market is set to witness substantial growth by 2028. Rising...