Anti-drone system sales account for around 4% share of the global drone market globally; however, penetration is expected to increase rapidly in parallel to the increasing unit sales of drones across the world.

Fact.MR, a market research and competitive intelligence provider, predicts thriving growth in demand for anti-drone devices over the years ahead. Anti-drone technology is used to identify and/or intercept unmanned aerial vehicles (UAVs) and unwanted drones.

With the development of economic and cost-effective UAVs, there has been a sharp increase in the utilization of hostile drones that can be used to deploy bombs, smuggle goods, or gather confidential information on sensitive assets.

An increase in aerospace and defense spending and rapidly rising utilization of counter drone technology due to lowering costs are projected to drive the sales of anti-drone systems at a high rate over the decade.

According to the latest analysis provided by Fact.MR in the anti-drone market report, sales of anti-drone systems witnessed a growth rate of 17.6% from 2017 to 2021 due to increasing demand from different use cases of anti-drone technology. Drone detection equipment accounted for a dominant market share at approximately 29.1% in 2021, as the sales of commercial drones have also increased rapidly over the years

Surging implementation of anti-drone weapons with a range of 4 km – 20 km in the North American region is projected to create an absolute $ opportunity of US$ 678 billion over the forecast period.

Furthermore, rapidly rising use of long-range acoustic devices (LRAD) and concealed threat detection systems as a reliable choice for safety is likely to drive market expansion throughout 2022-2032. Drone detection anti-drone radars, under the drone detection equipment segment by component, are predicted to increase at a CAGR of 21.3% over the forecast period. 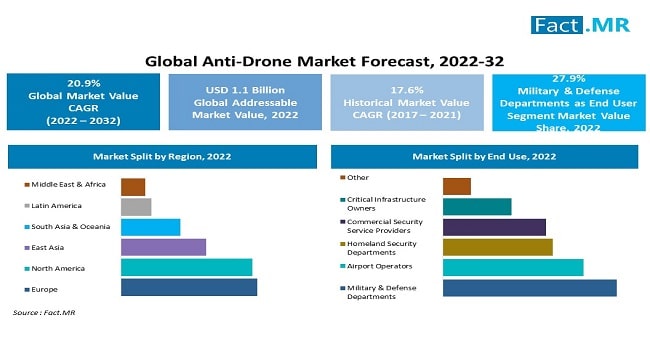 The U.S. is leading in the volume and value of UAVs that are exported, and most exports made were of smaller UAVs. In 2020, in the U.S., US$ 147 million of the total US$ 171 million value of UAVs exported were lower than 500 kg in weight.

With increasing tension in the geopolitical conflicts between Russia – Ukraine and China – Taiwan, there has been a rise in spending on the aerospace and defense arsenal of many countries. Countries such as the United States, United Kingdom, Russia, China, and India are increasing their spending on defense, just to be prepared in case of a crisis.

Out of all the counter drone weapons, anti-drone rifles are often utilized to shoot down drones. The United States is the highest spender on defense at US$ 778 billion, followed by China, India, Russia, the United Kingdom, and Saudi Arabia.

What is Preventing the Anti-Drone System Market from Reaching its Full Potential?

Based on the Fact.MR study, companies manufacturing anti-drone systems and drone accessories face heavy regulations by governments. As the defense sector is heavily regulated by governments, manufacturers find it difficult to concentrate on innovations in anti-drone devices. They cannot sell their products to rival countries that are willing to pay a good price for such equipment.

Also, because of security considerations surrounding counter-drone equipment testing and anti-drone jammer systems, classified comparison data is kept from the public and unavailable to government personnel as well. Counter-drone technologies are, for the most part, prohibitively expensive for practically everyone, most businesses, and even some governments.

What Makes China a Huge Market for Anti Drone Systems?

Huge investments are being made for the development of anti-drone technology in the military and defense sectors in China. These anti-drone systems are being used by security departments as well as the military. The risk of drone attacks or drone collecting intelligence has been significantly increasing in recent times.

The China anti-drone market is predicted to expand rapidly at 22.3% CAGR as a result of these factors. Growing number of manufacturers that are acquiring control over the market and aid from the government for research & development is influencing the regional growth.

The market for counter drone systems in China is estimated to reach a valuation of US$ 1 billion by the end of 2032.

Will Investment Increase Remain the focus for Anti Drone Manufacturers in the U.S.?

A developed nation such as the United States of America is spending US$ 778 billion on military and defense, per year. Expenditure on counter drones has been directed toward research rather than procurement. Trends of this investment are declining since 2018, but as high as US$ 1.49 billion was spent in 2018.

The U.S. DoD has been the largest customer for hardware and has extensive penetration in R&D for counter-drone technology since the introduction of the market.

Many companies have invested huge amounts of time and money in the United States by opening research laboratories and conducting extensive research. The United States anti-drone market is valued at US$ 278.6 million in 2022. With huge growth expected over the coming years, it has proven to be a favorable aspect for anti-drone manufacturers to leverage the market scenario with advanced technology.

The anti-drone industry is proportionally expanding with the global UAV and drone market. Additionally, government spending has substantially increased in the aerospace and defense industry, specifically towards the procurement of drones.

Under end users, airport operators enjoy a market valuation of around US$ 251.8 million in 2022, with this segment expected to reach a market value of US$ 1.7 billion by the end of 2032.

Airports are hot targets and very vulnerable in terms of terrorist attacks. It is common for airports to use anti-drone technology that is accurate and precise for security purposes. As such, demand for drone motors, anti-drone systems in airport operations is very high, leading to creating significant dollar opportunity for this end-use segment.

Why is Drone Neutralization Equipment Likely to Witness Accelerated Growth?

Drones can not only infiltrate restricted areas but also transport drugs, firearms, chemical agents, and even bombs. Security forces need to detect malicious drones and also be able to neutralize them. The primary function of drone neutralization equipment is to intercept and neutralize a hostile drone.

Moreover, there is rising demand for various technologies that are either passive or active. Drone neutralization systems prove to be pivotal for end users as loss of property can be avoided. Drone neutralization equipment is likely to account for a market value of US$ 291.6 million in 2022 and expand at a CAGR of around 21.1% over the forecast period.

Key manufacturers of anti-drone systems are constantly innovating to meet new challenges that are evolving daily. Prominent market players are focusing on a competitive market pricing strategy, which includes the installation of integrated systems along with high-end software.

Anti-drone companies are entering into collaborations and partnerships with governments and end-use industries for increasing the installation rate of anti-drone systems. Owing to the high need for security and rising drone demand, manufacturers are witnessing positive demand for military anti-drone technology.

What is the predicted valuation of the anti-drone market for 2032?

The global anti-drone market is likely to reach a valuation of US$ 7.4 billion by the end of 2032.

How much market value do homeland security departments account for at present?

The homeland security departments segment is likely to reach a valuation of around US$ 196.6 million in 2022.

Which region dominates value generation in the overall market?

Europe holds a leading market share of around 29.2% and is expected to remain in the same growth curve through 2032.

Which range of anti-drone systems holds the highest market share?

How is demand for drone neutralization equipment expected to shape up?

Drone neutralization equipment sales are expected to surge at a CAGR of 21.1% during the forecast period.

The military & defense departments segment is expected to hold a market share of around 36.4% by 2032.

The drone accessories market is set to top US$ 115 billion, expanding at an astonishing 20.7% CAGR b...