Growth in the surveillance and security drones market is attributed to increasing the use of drones in the military applications and other surveillance activities. The surveillance drone revenue is projected to reach US$ 5,512.1 million in 2023, growing at a CAGR of 14.4%.

From 2018 to 2022, the global market for surveillance drone registered a CAGR of 12.3%. Fact.MR, a market research and competitive intelligence provider, reveals that the market will exhibit growth at 14.4% CAGR between 2023 and 2033. 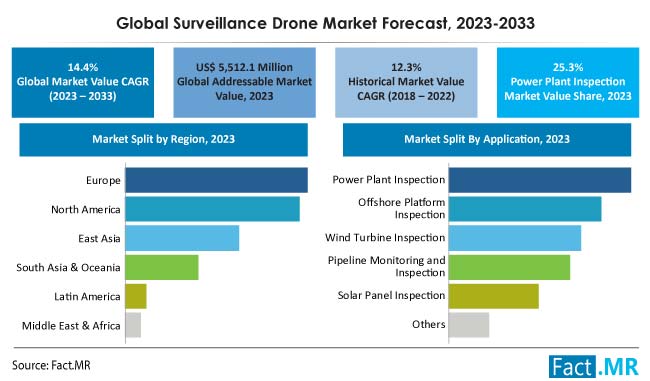 Market share analysis of surveillance drone based on application and region is provided in the above image. Under the application segment, power plant inspection sub-segment dominates with 25.3% market share in 2023.

Drone used for asset management and infrastructure inspections has recently increased due to factors such as how affordable drone services are, how simple they are to operate in remote areas, how accurately thermal imaging cameras can capture images, and how machine learning (ML) techniques can be used to analyze data and make predictions.

Drone-collected market information can be used to spot and anticipate flaws like structural corrosion, coating failures, and other structural damage. Since oil rigs need to be regularly checked in order to increase performance and safety, the oil and gas industry primarily concentrates on inspection and monitoring of oil platforms.

The numerous benefits that drone inspection has over conventional helicopter inspection techniques are also encouraging adoption in a variety of applications. As a result, the surveillance drone market is expected to grow 3.8x in 2023.

Increasing number of new wind turbine installations in North America and Europe is expected to boost the market growth during the forecast period. For example, 409 offshore wind turbines were installed in Europe in 2018. This new turbine deployment brings a total of 18,499 MW of installed offshore wind capacity in Europe. 44% of this total capacity was in the UK. These factors are expected to drive the market towards a higher CAGR during the forecast period.

Moreover, increasing use of Al guided drones for wind turbine inspection will further drive the market growth. For example, in September 2020, Aerodyne Group announced a joint venture agreement with Ecopulse, Mexico's leading renewable energy provider. Therefore, the growth of the global surveillance drone market is expected to accelerate at a valuation of US$ 5,512.1 million in 2023.

What Do Surveillance Drone Manufacturers Need to Watch Out for?

Experienced and skilled drone pilots are required to operate drones to survey offshore and onshore structures, and a shortage of such pilots is expected to hinder the growth of this market. According to U.S. federal regulations and policies, drone pilots must have a certified long-range pilot certificate approved by the Federal Aviation Administration (FAA).

Moreover, strict government regulations on the use of drones are expected to hamper the market growth. For example, the state of Arkansas, prohibits the use of drones to monitor critical infrastructure, according to a press release. These factors influence market growth. Lack of expertise in the area are expected to limit the growth of the surveillance drone market during the forecast period.

Why U.S. is Expected to Poise the Demand for Surveillance Drone Market?

North America is the largest region that has contributed to the growth of the global drone surveillance platform market. This is due to the great need for pipeline and offshore inspection and surveillance activities. The U.S. has the largest pipeline in the world, which is why the demand for drones is so high.

The United States leads the drone surveillance market for energy and power industry shares. This dominance is attributed to the widespread adoption of drone technology for pipeline inspection and surveillance applications in the United States. The United States has the world's largest pipeline network and is driving the growth of the North American market. Therefore, the U.S. surveillance drone market is expected to reach US$ 1,496.06 million by 2023.

Why Chinese Surveillance Drone Market Expected to Be Highly Lucrative?

This growth is expected to expand the number of UAV service providers for unmanned aerial systems, especially in China. Therefore, the surveillance drone market in China is expected to reach a valuation of US$ 738.98 million in 2023.

Why is Pipeline Monitoring & Inspection in Application Type a Popular Segment in Surveillance Drone Market?

Natural gas, petroleum, oil and gas, energy, and other industries all have high demands for pipeline safety and monitoring. Testing and monitoring are needed to prevent pipeline damage. The environment could suffer significantly and be negatively impacted by a leak or rupture.

One factor propelling the market expansion for pipeline monitoring systems is the rising number of leakage problems in the oil and gas industries. The pipeline monitoring and inspection application type sub-segment of the surveillance drone market is anticipated to create valuation of US$ 931 million by the end of 2023 as a result of the aforementioned facts.

Why There Is Big Opportunity for Multi-Rotor Drone in Type Surveillance Drone Market?

Surveillance drones can be classified as fixed wing drone, multi-rotor drone, hybrid drone depending on their type. Security forces frequently utilize multirotor drones because they enable them to keep a constant eye on mishaps and incidents from a safe distance while being on high alert for extended periods of time.

Multirotor drones are becoming more and more popular since they are better at navigating tight locations, such those under bridges, can hover above a location to gather more data, and need less room to land and take off.

With the introduction of multirotor drones, the market for extremely long-range multi-rotor drones has increased competition with fixed-wing drones. This would lead to a subsequent rise in demand for multirotor drone type, whose market value is estimated to be around US$ 2960.0 million in 2023.

As there are so many major players in the energy and power drone surveillance market, which operate globally as well as in regional markets, while highly lucrative market opportunities is leading to new entrant in the industry. Owing to which the competitive scenario for surveillance drones is highly fragmented.

These players are committed to offering a wide range of affordable services and solutions to oil and gas companies. Key market players are also able to maintain a sizeable market share due to elements like strategic acquisitions, a focus on boosting simulation and training services, and increased investment in R&D activities.

Worldwide demand for surveillance drone is anticipated to reach US$ 21,163.2 million by 2033-end.