As per Fact.MR, a market research and competitive intelligence provider, the global market for biodiesel was valued at US$ 96.22 Bn in 2021.

Transesterification, a chemical process that transforms oil and fats into fatty acid methyl esters, is used to make biodiesel from renewable feedstock such as vegetable oils, animal fats, and other sources. It is then utilized to power diesel engines as a fuel. Corn oil, palm oil, canola oil, soybean oil, and jatropha oil are some of the most frequent biodiesel raw sources. 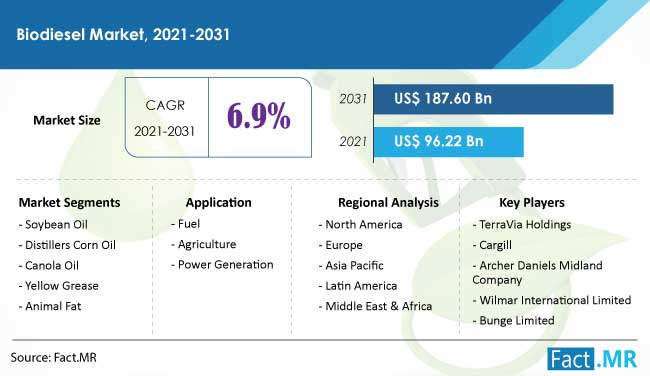 Moreover, the high compatibility of biodiesel with existing diesel engines is another factor driving biodiesel demand increase over the forecast period. The increasing population and, as a result, the number of automobiles and other industries that use biodiesel is predicted to enhance biodiesel demand.

Considering these factors, the market is projected to witness high growth over the forecast period, registering a CAGR of 6.9% to reach US$ 187.6 Bn by 2031.

Which Factor Can Positively Influence Demand for Biodiesel?

The growing need for energy independence and rising environmental concerns around the world are driving the biodiesel market. Biodiesel is a biodegradable fuel and may be used to make renewable fuel for transportation, making it clean fuel. Other advantages include its domesticity, which reduces reliance on imported petroleum and promotes market expansion.

Furthermore, governments are supporting and assisting in the promotion of biodiesel use by enacting laws and tax incentives, boosting market growth for the product over the projection period. Government organizations have been proactive in enacting legislation and policies, resulting in a rise in opportunities such as exports, feedstock development, and increased production.

In terms of quick growth and development, the biodiesel business is undergoing a shift that will bring new prospects in the next years around the world. Biodiesel consumption is expected to rise in the predicted period due to fluctuating petrochemical reserves on oil rigs across the world.

What Market Growth Restraints are Being Faced by Biodiesel Manufacturers?

With limited agricultural land, rising oil and fat demand, and an ever-increasing population, the market expansion is likely to be hampered by high competition in the feedstock needed for product manufacture.

The usage of biodiesel B20 blends has the potential to decrease diesel engine oil performance and shorten oil drain intervals. The use of biodiesel in certain engine types is restricted by a number of engine manufacturers in order to ensure that the engine has no negative impacts over its whole life.

Which Regional Market is Expected to Lead the Global Biodiesel Landscape?

Europe is expected to account for the highest share of the biodiesel market over the forecast period due to the quick adoption of and product innovation of biodiesel. Biodegradable fuel is recyclable. Furthermore, the growing demand for biofuel over fossil fuel, which is connected with higher greenhouse gas emissions, is a significant factor for demand growth in Europe.

The most frequent feedstock used for fuel manufacture in Europe is rapeseed oil, soybean oil, palm oil, animal fats, UCO, and sunflower oil. In addition, Europe has a variety of laws and initiatives in place to encourage the use of renewable energy, which is driving the demand for biodiesel generators in the region.

The United States is the world's leading producer of biodiesel and one of its top consumers. Biodiesel's environmental benefits, ease of accessibility, and the government Renewable Fuels Standard Program have all contributed to the expanding demand for biodiesel in the U.S.

Biodiesel is widely employed in the transportation sector, including school and transportation bus fleets, courier trucks, garbage trucks, and military vehicles. The availability of essential feedstock and high spending on renewable energy sources are driving market expansion in the United States.

Why is Demand for Biodiesel Surging in India?

India is predicted to be one of the fastest-growing markets for the product, as demand for diesel-driven vehicles in the country is rapidly increasing.

Which Biodiesel Feedstock is Expected to Showcase Highest Growth?

Biodiesel is a renewable fuel generated from a range of feedstocks such as vegetable oils, leftover cooking oils, and animal fats. Different feedstocks yield different quality of biodiesel. Because it is cheap and easy to obtain, soybean oil is one of the fastest-growing feedstock segments. This segment will provide profitable growth potential for biodiesel producers.

Soybean oil is the most common feedstock for biofuel manufacturing. One of the main driving forces is the price of soybean oil, which results in high utilization of the product in biodiesel manufacturing. Biodiesel production has increased as a result of the use of low linolenic (LL) soybean oil. The oxidative stability of LL soybean oil supports the generation of higher-quality biodiesel.

Because of the majority of manufacturers' technological know-how and the large oil yields supplied by these goods, soybean oil dominated the sector, accounting for the highest proportion of overall renewable feedstock consumption for biodiesel synthesis.

Which Biodiesel Application is Expected to Gain Momentum?

Fuel application is expected to lead the worldwide biodiesel market due to the widespread use of biodiesel for fuel in home and domestic applications. Biodiesel has a higher lubricity (50:1) than diesel fuel, which is another factor promoting its use as a fuel. The market is growing due to rising biodiesel fuel consumption in the marine, automobile, railway, and agriculture industries.

The business is expected to benefit from the rising demand for clean fuel in commercial vehicles to replace crude oil. The fuel is good for the environment because it emits fewer greenhouse gases than standard diesel because it has lower VOC content.

The COVID-19 pandemic hampered the biodiesel market. The COVID-19 pandemic had a significant impact on the world economy at various points, and the effects can also be observed in biodiesel demand. During the pandemic, major end users of biomass-based diesel, such as automobiles and agriculture, saw a drop in demand. Supplies chain interruptions, a shortage of raw material supply, and the government all had an impact on the market.

New advancements that are now taking place to boost performance qualities will add another good quality to the biodiesel's characteristics. Government regulations and tax rebates to encourage the use of biomass-based diesel will further contribute to the market growth over the forecast period.

Consumers all across the world are becoming more conscious of the escalating environmental challenges caused by traditional fossil fuels. The increased popularity of renewable and clean energy sources is helping to propel the biodiesel business forward.

The biodiesel market is extremely competitive, with worldwide firms producing technologically-advanced biodiesel-based products. Due to rising demand, leading biodiesel manufacturers are focusing on strengthening their relationships with major distributors and expanding their existing production capacity.

What was the market value for biodiesel in 2021?

Which key factors are driving the biodiesel market growth?

Which are the top 5 countries driving most demand for biodiesel?

The U.S., Canada, Germany, India, and South Korea are expected to drive most of the demand for biodiesel.

What is the sales forecast for biodiesel?

Who are the prominent suppliers of biodiesel?

What is the projected growth rate for the global market for biodiesel?

The methyl phenyl silicone resins market is set to witness steady growth during 2019-2029. The paint...