The corporate world, over the past three years, has experienced commotion in the process to manoeuvre around external factors led by COVID as well as wars, which has significantly impacted their performance. To maintain business continuity, companies had to go for large-scale restructuring, and resultantly, demand for corporate restructuring services increased and is likely to remain high for the next eight to twelve quarters.

Due to the COVID-19 crisis, many companies across the world faced cash flow issues and were not able to recover fully from the same, ultimately leading to acquisition or bankruptcy. Since there was nothing wrong with the company’s business model, many got acquired by large enterprises with great discounts on their valuation.

The global corporate restructuring advisory market expanded at a CAGR of 5.6% during the historical period 2018-2023. The market is expected to grow at a CAGR of 6.3% over the next 10 years. 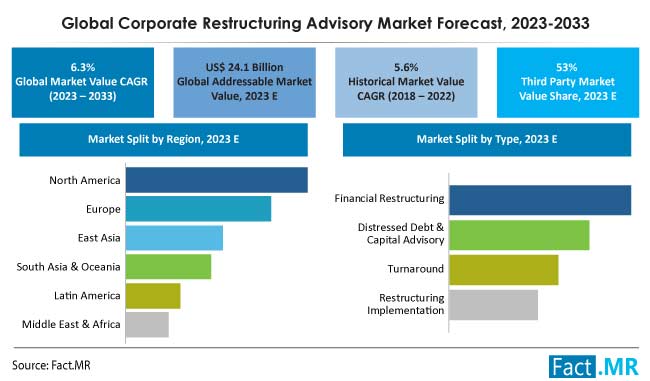 How Will Both Formal & Informal Restructuring Keep Service Providers Busy?

The beauty of the restructuring industry is that the demand for its services is always there in the market. Any kind of business activity, whether business expansion, a new line of credit, or management changes, needs the services of restructuring advisors.

The overall business environment is currently in turmoil. Reduced government sanction/support, higher rates of interest from lenders, and drought in funding from the private equity space are forcing many companies to either get acquired by a larger company or merge with companies of the same size.

During 2019-2020, B2B and D2C companies came into the market across different industries with deep funding from private equity and institutional investors. For some time, these companies were able to make a dent in the market share of established players. However, things did not work out as planned, and over a period, they ran out of money and most of these companies were nowhere near to being profitable.

The impact of COVID can be still seen in the funding space, resulting in many notable mergers and acquisitions and a few bankruptcies also. This has enabled an increase in the demand for corporate restructuring services.

One of the biggest notable examples is the WeWork saga, where in 2019, it was valued at US$ 47 billion and was planned for an IPO with the same valuation. Later concerns were raised by some investors/bankers, and as a result, the valuation dropped to a mere US$ 9 billion.

What Challenges are Faced by the Corporate Restructuring Advisory Industry?

Corporate turnaround and restructuring service market players engage with customers from different industries. All these customers have a unique set of problems and restructuring advisory firms have to deal with each issue in a new and unique way. A Few of the cases brought in by clients are complex and require time and extra effort for the desired solution. But given the strict timelines, many corporate restructuring companies do not take up some projects, resulting in the loss of business.

Restructuring service providers face intense competition as there are several players in the market who are ready to serve clients with lower fees and in a quicker turnaround time. Lack of top talent and increasing consultant salaries are a few other concerns faced by business turnaround advisory firms.

The U.S. economy is considered to be one of the most pro-business in the world. During COVID also the U.S. government provided financial stimulus to businesses across industries.

Every day, hundreds of businesses open in the U.S., and many of them are able to get financial support from different lenders. Well-established market players with deep pockets are trying to enter into different business domains by the opening of new business units or by acquiring existing companies in the market. The busy capital market, along with the private equity space, will keep the business restructuring market on its toe. In 2022, U.S. businesses spent a total of US$ 8.4 billion, making it the largest corporate restructuring market in the world.

The overall Indian economic environment has been growing steadily despite a global slowdown. In comparison to other major economies of the world, Indian businesses are reporting good topline numbers. Government undertaking companies have been going through a turnaround over the last few years as the current regime is trying to revive struggling PSUs.

Business restructuring by spinning off non-performing business units and management changes are a few of the steps being taken by the government to revive these companies. Such steps have kept turnaround advisory companies busy.

Lack of funding in private investment places has forced many private companies to restructure their current capital structure and raise money via the debt route. The Indian business restructuring advisory market is poised to expand at a CAGR of 7.1% and be one of the fastest-growing markets for turnaround service providers.

Financial Restructuring to Be Most Sought-after Service

Finance is one of the most important elements of any business across all industries. In the wake of the COVID-19 crisis, many companies around the globe faced financial problems and found it difficult to run their business.

Many such companies reached out to business turnaround advisors for help. Financial restructuring consists of contingency planning, distressed M&A planning, and tax & legal restructuring, among others. We saw that M&A activity was at an all-time high in many industry verticals such as retail, consumer goods, and technology.

Out of the total demand for corporate restructuring, financial restructuring accounts for more than 30% market share, and given the complex business condition along with intense competition, it is expected that this segment will swell even more in the future.

Consumer Markets Will Demand Most of These Services

Retail and consumer goods/service companies were the most affected by the COVID-19 crisis, and its impact is still very much visible as many D2C brands have wound up their businesses due to lack of funding or less demand for their product/services.

Even established firms such as Neiman Marcus and JCPenney were not able to sustain themselves and ultimately filed for bankruptcy. Contrary to what it seems, making it a successful business is not that easy in the retail industry. Consumer and retail businesses account for almost 27% of total turnaround advisory services demand. Few of the most common services demanded by retail businesses are bankruptcy support, valuation & modelling, rescue capital advisory, and distressed M&A, among others.

The global enterprises restructuring advisory market is highly competitive due to the presence of many small and large enterprises. In terms of value, more than 30% of the total market share has been captured by companies that have multiple locations. The industry has witnessed some notable mergers and acquisitions in the recent past.

Fact.MR has provided detailed information about the providers of corporate restructuring services positioned across regions, revenue growth, and service offering expansion, in the recently published report.

The market for corporate restructuring advisory services expanded at a CAGR of 5.6% during the historical period (2018-2022).

The U.S. corporate restructuring advisory market leads and is valued at US$ 8.4 billion in 2023.

The global corporate restructuring advisory market is expected to reach a valuation of US$ 44.5 billion by the end of 2033.

The market in East Asia is expected to grow at a CAGR of 6.8% over the next 10 years.

*74 figures and 42 tables includes by FactMR