What is the expected growth rate for the dust suppressants market through 2031?

By value, Fact.MR has projected around 5.5% CAGR for dust suppressant sales during 2021-2031, with the market being valued at close to US$ 7.3 Bn in 2021. In terms of volume, demand is expected to increase at around 4.6% CAGR over the same period.

Which are the most lucrative markets for dust suppressant manufacturers?

Who are the prominent manufacturers of dust suppressants?

Top manufacturers of dust suppressants include tier-1 companies such as Quaker Chemical Corporation, DOW, Arclin Inc., Ecolab, SUEZ, and BASF, which together accounted for 55% share of global revenue in 2020.

Historically, from 2016 to 2020, use of dust suppressants increased at around 4% CAGR, wherein, developed countries such as the U.S., China, Russia, Germany, U.K., Spain, Brazil, India, Chile, Peru, and Indonesia held significant share in the global market.

On a global scale, it has been seen that the usage of dust suppressants has been profoundly elevated with stringent government regulations in the view of occupational health & safety standards for industries. Market players are constantly providing improved suppressants compositions for wide applications to end-use industries such as mining, construction, food & beverages, oil & gas industry, thermal power, and others.

Considering these statistics and shift in dynamics, the business for dust control solutions is forecast to expand at a healthy CAGR of around 5.5% over the coming 10 years.

What are the Key Opportunities for Dust Suppressant Manufacturers?

Governments of different regions are concerned about degrading air quality index and occupational health & safety of workers in varied industries. These factors are surging the consumption of dust suppressants in order to reduce harmful and toxic dust particles in the work environment.

Market players must take this opportunity of increased demand for suppressants from end-use industries such as mining, construction, food & beverages, oil & gas, and thermal power. Also, surging GVA and index of mining production is propelling demand for these suppressants for different phases of mining operations.

Surging mining output by different mining industries positioned across different parts of the world is also driving demand for dust suppressants. Russia, China, Brazil, India, the U.S. etc., are some of the key countries with maximum mining output and holds approximately more than 40% of total output. Increased mining output itself fuels consumption of dust suppressants and help manufacturers strengthen their supply chains.

What are the Roadblocks for Dust Suppressant Suppliers?

Additional cost carried by dust suppressants, which sums up as the total cost of manufacturing and production, is a major roadblock faced by industry leaders. For key end-use industries, dust suppressants are just a liability that carries no return on cost. This additional cost poses as a burden to industries who are struggling with their production outputs and low capacity utilization rates.

Sudden shift of governments towards dependency on renewable sources of energy is also a notable restraint for this business. Countries are now focusing on wind, hydro, and solar-based energy generation, which shall degrade the potential of dust suppressant chemicals across industries.

Will Sales of Dust Suppressants Gain Traction Due to the Industry 4.0 Trend?

The market for dust suppressants already includes sufficient innovation and research to provide notable chemistries. Still, players operating in market are demanding escalated value addition to create a viable space and secure a prominent position in the market.

Dust suppressants with effective implementation of developed control systems are becoming popular in countries such as China, Japan, the U.S., South Korea, the U.K., Russia, etc., due to their easy use. Use of Internet of Things in dust suppressant equipment is likely to rise over the coming years, thanks to growing demand for remote-controlled operations and better, more refined control over the process. 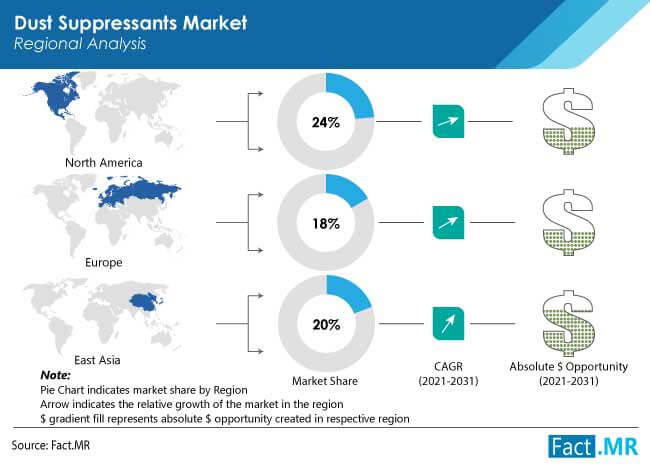 Why is the Mature for Market Dust Suppressants in the U.S. Still Growing Steadily?

The market in the U.S. grew 2.8% from 2012 to 2020. The U.S. is leading the market due to the most market players positioned here. The country is most suited for production due to ease of raw material availability.

Matured economy and heightened investments for infrastructure projects are fueling demand in the country. Apart from a robust production setup, production rate also plays a crucial role in driving the chemical industry potential, and market players are contributing to escalated greenfield investments to cater to rising demand across industries.

What Makes China a Hub for Dust Suppressant Demand?

In 2020, China accounted for over 60% of the East Asia market for dust suppressants. According to World Mining Data 2020, China holds the highest share in total world mining output with a capacity of more than 4,186.1 million tons.

Swelling mining output in East Asia is stimulating demand simultaneously. Market players find China as the most lucrative market for suppressants on a large scale.

Why is Demand for Wet Dust Suppressants Surging across Industries?

Wet dust suppressants hold around 95% market share, and the segment is expected to expand at 5.5% CAGR through 2031.

Actors are exploring betterment of suppressant materials to capture unexplored opportunities in the market. Market players have realized the importance of using surfactants in water to enhance the capabilities of suppressants. Wet suppressant usage is prominently driven by increased demand from mining and construction industries.

Wet suppressants include hygroscopic suppressants, adhesives, petroleum emulsions, polymer emulsions, electro-chemicals, and others. These products have gained traction as they cater to changing end-use industry preferences. End users are deeply acknowledging the upper edge of wet suppressants over dry suppressants, with additional innovation for chemical composition.

Using surfactants in water notably improves the binding properties of dust suppressants, especially with dust particles such as coal, without the need for watering that affects the calorific value of coal. 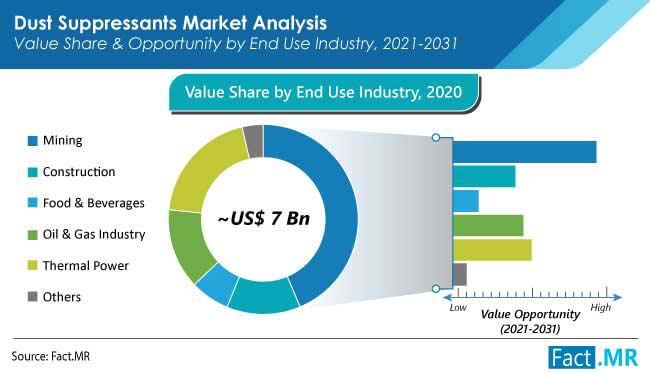 Which End-use Industry Generates Most Revenue for Dust Suppressants?

Mining, as an end use industry, accounted for around 50%of overall demand for dust suppressants in 2020. Growing concerns regarding cognitive healthy environment and changing government regulations are major driving factors for this segment.

Occupation health workers working at mining sites are seen facing immune health issues such as allergies, asthma, and others, which has boosted the potential use of dust suppressants at these sites to control dust emissions.

Governments are now focussing on improving air quality index of the environment. Mining industries are releasing maximum dust emissions as compared to other end-use industries. Dust suppressants are evidently used in pit to port applications and continue to thrive regarding overall consumption potential.

Which Type of Dust Suppressants Hold Lucrative Avenues for Manufacturers?

Adhesives accounted for 26% revenue share in 2020, and are expected to progress at a CAGR of close to 6% over the next ten years.

Increased innovation and research in providing high-end composition of suppressants is fuelling the segment with enormous capabilities to foster swelling fortunes. These adhesives are available as lignosulfonate and calcium lignosulfonate, which provides excellent dust control capabilities as compared to other suppressants.

How Has COVID-19 Contracted the Dust Control Market?

COVID-19 has significantly degraded demand for dust suppressants, as globally, most manufacturing sites and production houses across key countries were shut. The dust suppressants industry, which was growing at around 4.5% annually, witnessed a year-on-year reduction of nearly 2.5% in 2020, with the onset of COVID-19.

Highest hit in demand was observed in the 2nd quarter of the year, when end-use industries such as mining and construction were badly affected.

The global business of dust suppressants is now into a recovery phase, where market leaders are strategizing to put in pace robust supply chains and production units to cater to swelling demand. Key players are focusing on improving capacity utilization rates to flourish in this space.

Majority of companies discussed in the report have focused on product launches and expanding their manufacturing units in developing regions. Strategies include innovation, collaborations with key players, partnerships, strategic alliances, and strengthening of regional and global distribution networks.

What is the global market size of Dust Suppressants at present?

Dust Suppressants market is valued at close to US$ 7.3 Bn at present.

Who are the top players of Dust Suppressants?

Which region will largely contribute to the revenue growth of Dust Suppressants?

The U.S. region will largely contribute to the revenue growth of the Dust Suppressants Market.

Which End-use Industry creates the highest sales for Dust Suppressants?

Which type of Dust Suppressants to dominate the global market through 2031?