Hemodialysis is a procedure in which the blood is purified using a dialyzer, sometimes known as an artificial kidney, and a dialysis machine. Blood pressure and important blood minerals such as salt, potassium, and calcium are both controlled by hemodialysis.

Demand for hemodialysis is expected to be driven by several factors, including the increasing prevalence of acute kidney injury (AKI), technological advancements, a lack of organ donors, the risks associated with transplants, and initiatives by the major players to introduce cutting-edge products and services.

The COVID-19 pandemic has increased the need for dialysis significantly around the world. As a result, the industry is experiencing significant financial incentives and regulatory support from several government agencies across the globe. During the projected period, these factors are anticipated to boost the hemodialysis market growth.

Hemodialysis products are segmented into services, drugs, consumables, and equipment. Global demand for hemodialysis services is expected to increase at a CAGR of 5% during the forecast period.

Growing importance of contemporary renal care facilities for both emergency and chronic treatment, as well as the growing focus placed by service providers on giving patients high-quality care, is boosting the demand for hemodialysis services. Additionally, as a result of the service providers' improved business models, which are profit- and patient-focused, the sales of hemodialysis services are rising.

Sales of hemodialysis consumables are expected to expand at a healthy rate during the forecast period. Consumables are further segmented into bloodlines, concentrates, and catheters. During the forecast period, it is anticipated that substantial initiatives made by respective governments to improve patient safety, patient-centred care, and efficacy will increase demand for hemodialysis consumables.

Catheters are being produced using high-tech materials that are impervious to chemicals such as alcohol, peroxide, and iodine. Reducing the likelihood of malfunctioning will increase the life of catheters. Antimicrobial-coated catheters are also becoming increasingly popular, which reduces the incidence of bloodstream infections.

Thus, all the above-mentioned aspects are expected to increase the sales of hemodialysis consumables during the forecast period.

According to Fact.MR, a market research and competitive intelligence provider, the hemodialysis market is expected to see healthy growth after post COVID-19 pandemic period. Because of the pandemic's high hospitalization rates, the demand for kidney dialysis equipment and supplies has increased drastically. It was discovered that those who contracted the COVID-19 virus developed kidney ailments and other chronic conditions.

The market for hemodialysis is projected to increase due to the patients' rising risk of having chronic renal disorders and acute kidney damage, as well as rising rates of diabetes and hypertension in the population.

Rising risk of acquiring renal disease and kidney failure can be attributed to the rising prevalence of diabetes and hypertension in the population. A common side effect of both type 1 and type 2 diabetes is diabetic nephropathy. This condition affects the kidney's blood vessel clusters, which are responsible for filtering the body's waste and may be harmed by high blood glucose levels.

For instance, according to the statistics published by the International Diabetes Federation in 2021,

Diabetes and hypertension affect the kidneys by narrowing the arteries and limiting blood flow to the kidneys, which further increases the cases of chronic kidney disorders. Thus, such conditions are boosting the demand for hemodialysis equipment.

Which Obstacles Need to Be Tackled By Manufacturers of Hemodialysis Systems?

Continuous development in the hemodialysis market encourages innovation, which leads to the creation of sophisticated systems that patients and clinicians are finding difficult to adapt to. The only way to get beyond this obstacle is by providing instructional training and introducing devices that are simple to handle.

Another factor that may hamper the sales of hemodialysis equipment during the forecast period is the high cost of the treatment. Due to the high cost of the therapy and the need for frequent sessions, dialysis burdens many patients financially. A kidney transplant or dialysis treatment places a heavy financial burden on the majority of people in middle-income countries. 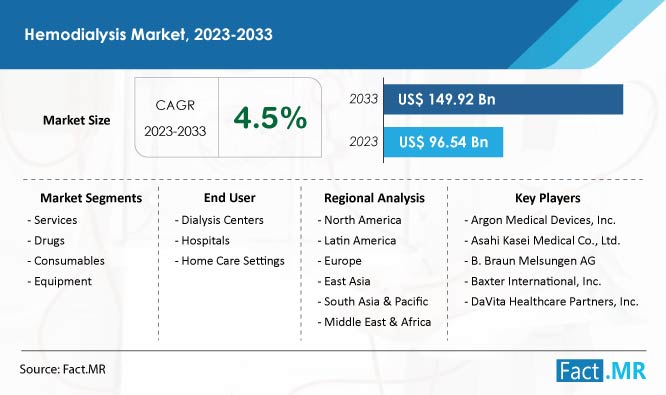 What is the Demand Outlook for Hemodialysis Services in the United States?

The United States currently holds a significant share of the North American market. The dominance can be attributed to the factors such as increasing cases of chronic kidney disorders due to the prevalence of hypertension and diabetes, availability of well-established healthcare infrastructure, and rising spending power on healthcare.

Furthermore, the growing rate of elderly population in the nation is more likely to experience chronic renal illnesses, diabetes, and hypertension, which further is expected to boost sales growth over the projection period.

Why are Sales of Hemodialysis Equipment Increasing Rapidly in Germany?

Demand for hemodialysis equipment in the Germany market is increasing due to the government's efforts to provide affordable treatments and the exponential growth in the rate of dialysis facilities. The growing older population, which has higher incidences of diabetes, is another factor that favourably influences the growth of the market for hemodialysis.

What is Supporting Product Sales Growth in China & Japan?

The rapidly growing rate of the senior population in China and Japan is supporting the sales of hemodialysis systems. The ageing population is at higher risk of experiencing kidney-related disorders.

Also, the Chinese government is launching various programs and adopting several efforts to raise awareness of acute kidney injuries and other kidney-related disorders. Furthermore, the rapid growth of the healthcare sector and the introduction of automated diagnostic tools are encouraging the sales of hemodialysis systems in these countries.

As a result, the population's demand for hemodialysis is rising due to the lack of available kidneys for transplant. Thus, such aspects are fuelling market growth.

The market is anticipated to be driven by leading manufacturers' efforts to produce specialized dialysis equipment as well as expanding alliances and collaboration among industry participants. Some of the key players in the hemodialysis market are collaborating with regional participants to expand their product offerings, and for that, they are constantly working on pricing trends, local supply chain management systems, and product quality standards.

Global sales of hemodialysis equipment are expected to reach US$ 149.92 billion by 2033.

Worldwide demand for hemodialysis systems is predicted to increase at a CAGR of 4.5% through 2033.

Some of the leading companies in the market are Argon Medical Devices, Inc., B. Braun Melsungen AG, and DaVita Healthcare Partners, Inc.