Sales of hexane in the MEA region are anticipated to increase at a CAGR of 3% and account for a valuation of US$ 143.9 million by the end of 2032. However, volatile exchange rates and instability in the political landscape are expected to hamper market potential in the MEA region.

Increasing population across the world is driving demand for food products and this is anticipated to drive demand for n-hexane as it is used widely in the extraction of edible oil. The n-hexane market research report discusses how demand is expected to evolve across the world with trends, opportunities, and restraints.

From 2017 to 2021, worldwide shipments of hexane rose at a CAGR of 2.9%. Increasing industrialization on a global scale has led to a rise in demand for solvents and since hexane is an ideal choice for solvent formulation its demand is anticipated to witness an increase across the forecast period.

High demand for hexane from the pharmaceutical industry is also expected to favour hexane market potential through 2032. Hexane is also a key ingredient in adhesive manufacturing and the rising demand for adhesives is expected to positively drive the growth of the market.

Increasing demand for leather is also expected to propel the consumption of hexane as it is used in leather treatment. However, stringent mandates for environment conservation and volatility in prices of raw materials are expected to hinder the global hexane market growth. 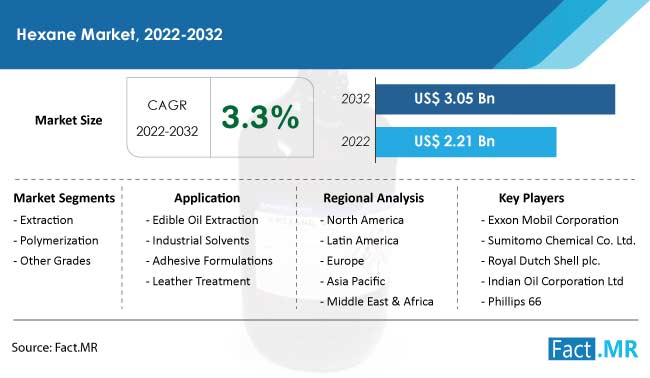 What Factors Could Potentially Improve the Hexane Market Outlook?

“Rising Use of Hexane to Extract Non-polar Carotenes”

While chloroform and methane-based formulations have exhibited higher efficiency, their use has been restricted by the human health and environmental hazards associated with them. This is anticipated to favor the demand for hexane organic solvents used in the extraction of non-polar carotenes.

What Challenges Do Hexane Manufacturers Face?

These norms are causing the demand for hexane to shrink and hence have an adverse impact on the overall market growth through 2032. Hexane suppliers are focusing on launching new hexane solvents that are in compliance with these new norms and are trying to sustain their businesses by the deployment of various strategies.

The economic slowdown caused due to the emergence of the COVID-19 pandemic in 2020 has had a negative impact on the global hexane market and caused it to slow down. Variable exchange rates have induced volatility in the pricing of crude oil which has also had a negative impact on hexane sales and is expected to be a restraining factor throughout the forecast period as well.

Which Regional Markets Will Provide High-Growth Opportunities for Hexane Vendors?

North America currently holds a dominant stance in the global hexane industry landscape and is slated to maintain this across the forecast period. At present, the hexane market in North America stands at a value of US$ 724 million and is expected to hold a major market share of 33.5% by 2032.

Increasing consumption of packaged foods is expected to drive demand for food-grade hexane in this region. High usage of cooking oil in this region is projected to bolster hexane products market growth in this region through 2032.

High demand for luxury products in the region of Europe drives demand for leather which subsequently propels sales of hexane as it is a crucial material used in leather treatment.

Expanding at a CAGR of 3.4% through 2032, demand for hexane in Europe is expected to attain an estimated revenue total of US$ 901.2 million by the end of the forecast period.

Shipments of hexane in the Asia Pacific region are projected to attain a value of US$ 778.2 million by 2032 and currently account for a significant market share of 26.1% in the global hexane industry landscape. Increasing consumption of food and beverages in this region is anticipated to bolster demand for food-grade hexane through 2032.

Increasing scope of application of hexane products such as hexane sulfonate, ethyl hexane, polymer-grade hexane, etc., across various industry verticals is expected to further drive hexane market growth over the years to come.

Fact.MR, a market research and competitive intelligence provider has created an in-depth assessment of all major regions for the global hexane market in this latest research survey.

What is the Outlook for the China Hexane Market?

China has a highly lucrative agriculture industry that is required for edible oil extraction. China has witnessed a growth in its foodservice industry in the past few years as disposable income and consumer trends have evolved. This is expected to drive demand for food-grade hexane in the country over the forecast period.

The presence of various industries in China is also expected to bolster the demand for hexane solvents in the country. The hexane market in China is expected to be valued at US$ 222.1 million by 2032 while expanding at a CAGR of 3.2% over the forecast period.

Will India Be a Lucrative Market for Hexane Suppliers?

The India hexane market is expected to be primarily driven by rapid industrialization which has resulted in the high use of hexane in several industry verticals. Moreover, favorable government policies in India to boost industrial activity are also expected to open up new opportunities for hexane manufacturers in the country.

Increasing consumption of food and beverages in India is also expected to drive demand for food-grade hexane in the country throughout the forecast period. The hexane market in India stands at a valuation of US$ 137.6 million and is projected to attain a revenue total of US$ 191 million by 2032 while expanding at a CAGR of 3.3%.

Which Grade of Hexane is Expected to Exhibit Higher Demand?

“Use of Hexane for Extraction Applications to Be High”

Based on grade, the hexane market is segmented into extraction, polymerization, and other grades.

The extraction segment is anticipated to account for a valuation of US$ 1.65 billion by 2032 and currently holds a major market share of 52.8% in 2022.

Which Application Should Hexane Suppliers Focus on to Drive Revenue Growth?

Based on application, the hexane market is segmented into edible oil extraction, industrial solvents, adhesive formulations, and leather treatment.

The population across the world has witnessed a substantial increase over the past few years and is expected to rise further across the forecast period. This increased population has resulted in high demand for food products which in turn is driving the food and beverages industry. The use of edible oil has increased due to the aforementioned factors and hence edible oil extraction demand is also on the rise.

Hexane is majorly used for edible oil extraction and this application accounts for a major market share of 36.5% in 2022 and is anticipated to witness expansion at a CAGR of 3.6% through 2032.

Key hexane manufacturers are investing in research and development to advance their product portfolio and diversify their offerings to gain a competitive edge over the other market players.

The hexane market is nearing consolidation and hence it is difficult for new entrants to make a mark in the global hexane industry landscape. However, with proper planning and enough investment they can penetrate the market and gain a notable market share.

How big is the hexane market?

The global hexane market currently accounts for a valuation of US$ 2.21 billion.

What will be the value of the hexane market in 2032?

What is the hexane market growth outlook for the forecast period?

What are the major factors driving demand growth of hexane?

Increasing consumption of edible oil, rising use of food-grade hexane, and increasing focus on industrialization are market-driving factors.

North America accounts for a dominant market share of 32.7% in the global hexane market.

Who are the key manufacturers of hexane?

The conditioning polymers market is set to register average single-digit CAGR during 2019-2029. Grow...