Sales of hydraulic oil coolers accounted for nearly 5% share of the global coolers market at the end of 2021.

The heat load or cooling capacity of the cooler is directly proportional to the size of the cooler. However, defining process parameters such as required flow rate, oil temperature threshold, viscosity of oil, and others to achieve higher efficiency has been the complex element witnessed by leading manufacturers.

Owing to large-scale adoption across prominent end-use industries, demand for hydraulic oil coolers is expected to witness a steady increase over the coming years.

From 2017 to 2021, the global market for hydraulic oil coolers registered a CAGR of 1.6%. Fact.MR, a market research and competitive intelligence provider, reveals that hydraulic oil cooler sales are expected to increase rapidly at 5.9% CAGR between 2022 and 2032. 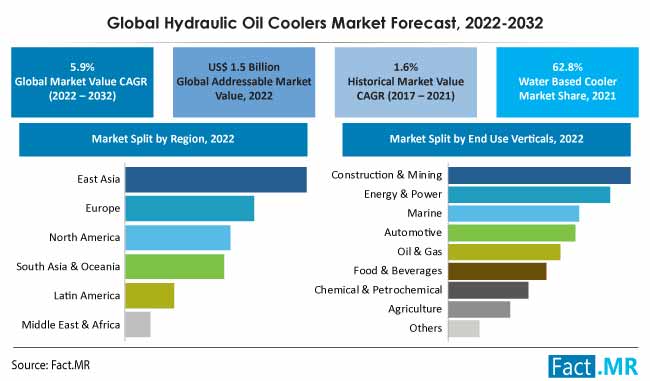 Coolers are employed in this situation to allow the heat created to release its thermal energy into another medium. Air or water often serves as this supplementary medium, which is integrated into the hydraulic system. Heat from the oil is absorbed by the secondary medium, which then transports it outside the cooler and releases it into the atmosphere.

There is the accumulation of thermal energy due to the friction and compression of the oil used in the system. The accumulation of heat, up to a certain value, can be accepted, but beyond that value, the viscosity or thickness of the oil begins to get altered. The oil becomes either thick or thin, which hinders the operation capabilities of the hydraulic system.

The main function of a hydraulic system is to work effectively with a particular oil having a specific viscosity. If the viscosity of the oil lessens, then there can be mechanical damage to the system as the other components do not receive proper lubrication.

As such, there is degradation of the overall efficiency of the hydraulic system. Hence, a cooling component needs to be placed in the line of the system so that it dissipates the heat within the threshold limit. The cooling system maintains the viscosity of the oil, thereby increasing its efficiency, owing to which, the market for hydraulic oil coolers is expected to create an absolute dollar opportunity of US$ 1.3 billion during the assessment period.

“Freedom to Select Size of Device Depending Upon Heat Generation”

The size availability and cooling capacity of hydraulic oil coolers is highly flexible and can be easily tailored as per the end-use industry’s requirement. Depending on the amount of heat generated, the installation and scalability of hydraulic oil varies, which has created dynamic demand in the market.

Manufacturers are channelizing their resources to fabricate and develop coolers that are easily molded to achieve variable process parameters as per the requirement of end users.

Currently, coolers are integrated with software modules to collect operational data points for analysis. One such program is the Parker program. Inputs that the software needs are heat load, type of oil, ambient & inlet temperatures, flow rate, etc.

As customization and technological advancements are pacing up in the hydraulic coolers market, the market is expected to grow 1.8X over the next ten years.

“Complications May Arise in Sizing of Off-axis Coolers”

The position of the cooler is to be chosen wisely under extreme operating conditions. There are two options - either it can be placed off-line or in the return line. The sizing of the cooler can be decided depending on two factors - maximum reservoir temperature or maximum system temperature.

Due to some complications in positioning the oil that exists the cooler appears to be cold than the desired temperature of the reservoir. This mixing of the locations and sources of oil relative to each other complicates the entire system and may a lead to drop in the sales of hydraulic oil coolers.

Why is the U.S. Hydraulic Oil Coolers Market Expected to Be Lucrative?

Agriculture is also very prominent in the U.S., wherein, the U.S. agriculture industry is grossing US$ 157 billion. Major equipment in agriculture such as tractors and farm machinery are installed with hydraulic oil coolers.

Owing to increasing penetration across the construction and agriculture industry, the U.S. hydraulic oil coolers market is expected to reach a valuation of US$ 387.4 million by 2032.

In China, the automobile industry saw total volume sales of 26.2 million units in 2021. Shock absorbers, brakes, power steering, and drive systems in heavy and commercial vehicles use hydraulic systems. Therefore, penetration across the automotive industry is on the rise, leading to increased unit sales of hydraulic oil coolers.

The construction industry was valued at around US$ 1,049 billion in 2020 in China. Hydraulic machines such as excavators, bulldozers, wheeled tractor scrapers, etc., need to maintain efficiency while performing at optimal process parameters. The use of hydraulic oil coolers in these systems is of high importance and is installed at higher volumes in the country.

This will enable the growth of the Chinese hydraulic oil coolers market in the long run. The Chinese market is expected to create an absolute dollar opportunity of US$ 364 million over the assessment period.

According to the Fact.MR study, there is high demand for the water-based hydraulic oil coolers which have captured nearly 62.8% market share in 2021 under product category.

To regulate the temperature and limit the heating, water-cooler systems use cold fluids. These liquids are separated using a barrier to avoid contamination. They are highly efficient and compact with lower noise generation.

Cold fluids are used in water-cooled systems to control temperature. To lessen contamination, a barrier is placed between the liquids. They are small, run considerably more quietly, and don't affect the atmosphere in the area. The temperature outdoors and in the area has little to no effect on how well it can cool.

How is the Construction Sector Leading the Sales of Hydraulic Oil Coolers?

The global construction market is estimated to grow by US$ 4.5 trillion and reach US$ 15.2 trillion by end of 2030. Sub-Saharan Africa is predicted to experience the biggest regional construction increase, followed by Asia.

It is anticipated that urbanization would accelerate growth in emerging markets. By 2050, the world's population could increase by 2.5 billion, with around 90% of that increase in the urban regions of Asia and Africa.

There will be lucrative opportunities offered by the construction industry, wherein, the use case of hydraulic systems is on the rise. The installation of cooling systems for these hydraulic equipment has witnessed significant growth. The construction and mining segment is expected to reach US$ 528.9 million by 2032.

Leading market players are constantly channelizing their resources to develop automated and smart hydraulic oil coolers. A clear trend for more efficient hydraulic oil coolers with higher levels of efficiency and ideal thermal stabilization and cooling capacity is being observed. To achieve this, companies are transforming towards developing tailored solutions. They are enabling integrated sales channels to limit the number of stakeholders across the supply chain to generate higher margins.

What is the stance of the global hydraulic oil coolers market?

The global hydraulic oil coolers market is currently valued at US$ 1.4 billion.

How are sales of hydraulic oil coolers expected to increase?

Worldwide demand for hydraulic oil coolers is anticipated to reach US$ 2.7 billion by 2032.

How did the hydraulic oil coolers market evolve over the past four years?

What is the outlook for the hydraulic oil coolers market in East Asia?

Fluoroscopy Equipment Market is expected to register a CAGR of 6% with conventional fluoroscopy syst...