Newly published data by Fact.MR estimates the global market for nizatidine to flourish at an impressive 9% value CAGR across the 2021-2031 assessment period. Expected valuation for the market by the end of the said decade is likely to reach US$ 12.2 Bn, while as of 2021, the expected market value is US$ 5.1 Bn.

According to Fact.MR- a market research and competitive intelligence provider- the market for nizatidine experienced a noteworthy upsurge from 2016 to 2020, expanding at a CAGR of 7%. Growth is riding on the back of rising prevalence of gastric disorders.

Attributed to its anti-inflammatory effects, nizatidine is being investigated in order to develop anti-viral drugs which could prove to be highly effective in countering the COVID-19 pandemic. Various pharmaceutical giants are ramping up efforts to fast track the development of nizatidine infused drugs.

In addition, numerous well-known companies have won approval to sell their products in new areas, boosting their growth chances. Over the forthcoming decade, the market is expected to grow at a rate of 9% in value CAGR terms.

Globally, as healthcare infrastructure improves, overall spending on high-quality treatment is increasing. This is largely due to the combination of modern technologies and innovative therapeutic approaches. This is true even for the treatment of gastrointestinal problems.

Various pharmaceutical grade treatments, such as nizatidine medicines, have been developed as effective alternatives. These medications are readily available online or over-the-counter at low prices, making them accessible to people of all socioeconomic backgrounds.

How is Nizatidine Uptake Fueled by Increasing Awareness of Gastric Disorders?

According to the British Medical Association (BMA), non-communicable diseases (NCDs) account for 60% of the worldwide illness burden, with stomach disorders accounting for the majority of this total. As a result, regional-level measures are ongoing to address this issue.

The National Institute of Diabetes and Digestive and Kidney Diseases (NIDDK) is financing research studies in the United States to better understand the complex connections between genetic, environmental, immunological, and microbial variables that contribute to stomach disorders. Such endeavors are also assisting in the development of nizatidine-based medications.

In 2020, the U.S Food and Drug Administration announced a voluntary recall of ranitidine and nizatidine tablets by two major manufacturers, Appco Pharma and Mylan N.V., in early 2020. While the former recalled all of its tablets, the latter pulled three batches of nizatidine capsules from the market.

The aforementioned recalls were prompted by a significant risk of contamination due to NDMA levels exceeding the FDA's permitted daily intake guidelines, which is a probable carcinogen. As a result, product releases are likely to be postponed, limiting growth opportunities.

Why will India Witness High Growth over the Upcoming Years?

According to the India Brand Equity Foundation , India is the world's largest provider of generic medications, and the home market is predicted to grow threefold by 2031, with medicine spending expected to increase by more than 9%. (IBEF). As a result, nizatidine sales are expected to grow in the next years.

Currently, nizatidine is produced in India by a small number of well-known pharmaceutical businesses. Glenmark Pharmaceuticals, Dr. Reddy's Laboratories, and Strides Pharma Science are the companies in question. More players are expected to emerge in the Indian environment as regulatory approvals are expedited. The Indian market is poised to surge at a CAGR of 8.5% by 2031, according to Fact.MR

What are the Prospects for Nizatidine Sales in the U.S?

The National Institute of Diabetes and Digestive and Kidney Diseases (NIDDK) estimates that 60 to 70 million people are affected by digestive diseases, with over 20 million hospitalizations. Diverticulosis, GI infections, and gastroesophageal reflux were among the most common.

As a result, the use of antihistamines to reduce excessive gastric juice production is on the rise, boosting nizatidine sales. Certain companies, such as Amneal Pharmaceuticals Inc., have been given permission to resume sales of their nizatidine oral solutions, indicating that future growth is possible. As per Fact.MR, the U.S market is poised to surge at a CAGR of 7.2% until 2031.

Why is China Expected to be an Attractive Market for Nizatidine?

It is apprehended that China accounts for a significant chunk of irritable bowel syndrome- affecting between 4 to 7% of the population. According to the National Center for Biotechnology Information (NCBI), China is one of the countries with the heaviest burden of gastric cancer (GC). 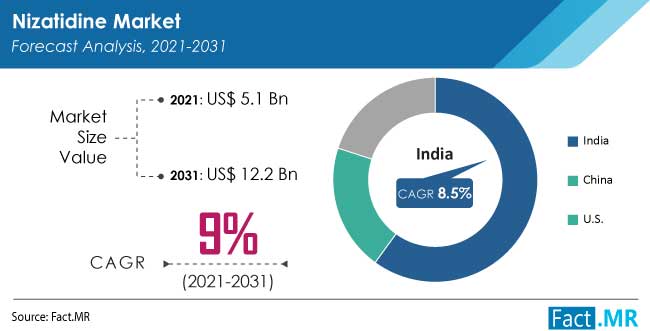 Is Nizatidine Product Sales Increasing Through Retail and Online Channels?

While hospital pharmacies remain the principal source of nizatidine capsules and tablets, sales at retail and online pharmacies are fast expanding at a CAGR of about 14%, owing to the convenience of access and availability.

The fast growth of over-the-counter pharmacies and online medical stores is providing leading nizatidine manufacturers with a better platform to sell their medicines to potential customers.

Nizatidine Capsules to witness huge demand over the upcoming years?

Nizatidine capsule sales are expected to outperform other forms, such as tablets and powder, with a CAGR of over 10% from 2021 to 2031. These capsules are offered in two doses to treat duodenal ulcers: 150 mg and 300 mg, respectively.

Nizatidine capsules operate faster than tablets because they break down faster, and they are less likely to have a disagreeable taste or odor, which is especially useful for those who have trouble swallowing tablets.

Prominent nizatidine manufacturers are reliant on regulatory sanctions from appropriate authorities to market their products, besides resorting to strategies such as mergers, acquisitions and collaborations.

According to Fact.MR, nizatidine sales are expected to reach US$ 5.1 Bn as of 2021

As of 2031, nizatidine sales are expected to be valued at US$ 12.2 Bn according to Fact.MR