Pickleball machine sales accounted for around 10% share of the global pickleball equipment market in 2021. The market is estimated to offer an absolute $ opportunity of close to US$ 15 Mn during the forecast years of 2022-2032.

As per detailed industry analysis by Fact.MR, a market research and competitive intelligence provider, the global pickleball machine market expanded at 4.1% CAGR from 2017 to 2021.

Demand for pickleball machines is continuously witnessing growth due to rising demand among pickleball players for practice. Market demand is estimated to grow 2X over the forecast years of 2022-2032.

The pandemic highly impacted the sales of pickleball machines globally. A blend of both, online and offline sales represents a slightly negative outlook on both fronts. Online sales and offline sales are projected to increase at CAGRs of 7.8% and 7%, respectively, during the assessment years. 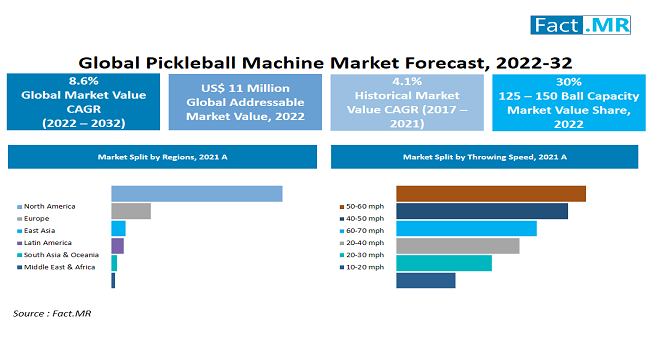 The pickleball game has seen one of the fastest growth rates in recent years. According to the Sports & Fitness Industry Association’s (SFIA) 2020 Pickleball participant report, pickleball currently has 4.2 Mn players in the U.S. alone. According to USAPA, pickleball has seen significant increase in numbers over the last six years, there driving pickleball pitching machine demand in parallel.

Moreover, most pickleball games are played on retrofitted tennis courts, and it’s easy and quick for the recreation department and parks to get the game up and running, which is also a reason why it is easy to play and establish.

Further, every United States and Canadian countryside has pickleball venues. YMCAs, senior residence communities, local community recreation centers, parks and schools are just some of the places likely to have pickleball courts. Rapid rise in the number of courts and players is expected to drive pickleball machine sales over the years to come.

“Establishment of Several Pickleball Sports Associations Such as USAPA”

In any sport, the presence of a governing body that handles the growth and establishment of the sport is a beneficial factor and acts as an important driver for the marketing of the sport.

Various associations have been developed for pickleball in different parts of the world. Some of them are USAPA (United States of America Pickleball Association) and AIPA (All India Pickleball association).

These tournaments and events presents an opportunity for new players to enter into the competitive sector of the game, which results in more endorsements, sponsorships, and overall growth of the sport. According to Selkirk Sports, in 2018, nearly 2,200 athletes competed in the annual U.S. Open Championships, an event that is growing by an estimated 40% participation rate each year.

“Possibility of Pickleball in Future Olympics May Offer Opportunities”

IFP (International Federation of Pickleball) is also focusing on pushing the pickleball sport into the Summer Olympics. This could turn out to be an enormously advantageous aspect for the growth of the game, as the Olympics is a world-renowned multi-sporting event.

In addition, a sport is selected in the Olympics only if it is recognized by the IOC (International Olympic Committee). For recognition, the sport should be played in more than 75 countries, across 4 continents, and pickleball is closing in on that requirement, as it is growing rapidly in the European and Asian regions.

With rapid development and expansion of the sport, selection in the Olympics is a key opportunity for the pickleball pitching machine market to shoot up.

Pickleball is still a growing sport and has a relatively lesser popularity factor as compared to other big sports such as football, cricket, and others major league events. This results in lesser telecasting possibilities of the sport around the globe. This acts as a major restraint for the pickleball throwing machine market, as it lowers the chances of potential customers buying pickleball machines.

Moreover, in the current scenario, only the Western regions of the world telecast local pickleball tournaments, including the U.S. Open Pickleball tournament, even though it enjoys considerable popularity when it comes to players representing their brands/teams; but on a global scale, lesser viewership is impeding market growth.

Which Country Accounts for Substantial Demand for Pickleball Machines?

This high growth is credited to the existence of numerous established companies in the region in addition to the entrance of new market players who look to acquire more consumers and thereby hold more market share. Moreover, key market players are introducing innovative DIY pickleball machines, both, small size and easy to operate via smartphones and other gadgets, which is estimated to attract more players.

Which Countries are Leading Market Expansion in Europe?

“Germany and U.K. Pickleball Hotspots in the European Region”

Germany and the U.K. pickleball throwing machine markets hold 19% and 17.5% of the European pickleball machine market share, respectively. These markets are projected to increase at CAGR of 9.9% and 10.8% correspondingly across the forecast years of 2022-2032.

High growth in both countries is attributed to an increase in per capita expenditure on sports. Additionally, owing to changing consumer lifestyles and preferences, the pickleball market is growing at a faster pace.

Further, as consumers are becoming conscious of their mental and physical health, this change is powering pickleball equipment market growth and also demand for used pickleball machines in the sports industry.

Which Capacity Machine is the Leading Market Contributor?

Pickleball ball machines with 125-150 ball capacity holds nearly 37% market share. This segment is projected to expand at a CAGR of 8.3% through the assessment period. This is attributed to the advantages and features offered by these machines with large pickleball capacity.

Machines with large pickleball capacity, such as 125-150, are largely preferred by pickleball players to practice with by reducing the time and efforts in managing the machine features frequently. This makes them more attractive as compared to counterparts with ball capacity of 50-75 and 75-100.

According to the pickleball machine industry analysis, Lobster Sports, Inc., Pickleball Tutor, Playmatetennis, SIMON-the Pickleball Machine, and Spinshot Sports are leading suppliers of the best pickleball machines. The global market is highly competitive and consolidated due to the presence of regional and domestic players. Numerous marketing strategies have been adopted by leading players such as collaborations, mergers & acquisitions, expansions, and partnerships.

Additionally, new product development, as a strategic approach, is being adopted by key pickleball machine producers to upscale their market presence among consumers. These strategies have resulted in the incorporation of advanced pickleball ball machines.

What is the global pickleball machine market scenario?

Global value of the pickleball machine market is estimated to be worth over US$ 11.1 Mn in 2022.

How far is global demand expected to reach over the forecasted period?

Demand for pickleball throwing machines is anticipated to surpass US$ 25.7 Mn by 2032-end.

What was the last 5-year CAGR for the demand for pickleball machines?

Who are the prominent manufacturers of pickleball machines?

Which is the leading regional market for pickleball equipment?