The global programmable stage lighting market is projected to witness steady growth at a CAGR of more than 5% over 2021 to 2031, with strip lights being the leading contributor to market growth. This is being supported by major investments being made in the image management sector and advances in interoperability with mobile and computer devices. Programmable stage lights find a wide range of uses in theaters and other entertainment and sports sector businesses. Demand for laser light setups is witnessing significant uptake across regions.

In its latest report, Fact.MR offered key insights on factors expected to power demand for programmable stage lighting in the years to come. The report covers details on over 20 high-potential markets, where North America and Europe hold the lead. The study also provides details on the effects of the COVID-19 pandemic on the events and entertainment sectors, and the consequent impact on the demand for programmable stage lights in particular.

For the historic period 2016 and 2020, the programmable stage lighting market expanded at a steady rate of nearly 5%. Strong demand from event management companies and growing awareness about product offerings in emerging economies powered market growth during this period.

Further advancements in the production of programmable stage lighting setups with low-power requirements and rising popularity of LED lights have driven developments. However, the COVID-19 pandemic hurt growth as live small- and large-scale events around the world have been cancelled or postponed.

On the other hand, advances being made in AI and machine learning for interoperability with varying computer and mobile device systems are key factors that will support recovery of the market and growth in 2021 and beyond.

How is Intelligent Lighting Influencing Demand?

Developments in terms of intelligent lighting technologies have largely been aimed at applications in the events industry. Specialized lighting for wireless lighting displays and LED dance floors have contributed to these novel advancements in the events industry, and have also allowed event planners to find optimal resources to improve audience experience. Business events have also created new opportunities, which have added LED display panels and innovative ambient lighting to conventional setups of conference tables and chairs.

In recent years, improvements in LED lighting fixtures in terms of affordability and designs have allowed for large-scale aesthetic changes at lower costs. This has enabled lighting designers to increase the number of fixtures installed in a room. New fixtures are even available in dual-sided designs for displaying HD video images, 3D lighting effects, and high intensity LED pixel matrixes simultaneously on stage. Such hybrid lighting in combination with conventional LED wall panels aid in opportunities for better interaction between displayed content and the audience.

Furthermore, with the integration of Internet of Things (IoT) systems, growing application of newer stage lighting designs in conjunction with fog machines and lasers bolster special effects on stage is anticipated to boost growth of the events industry in the long term.

How are Efforts towards Psychological Utility Generating Product Development Opportunities?

Research in the field of human-centric lighting is fairly new. It primarily focuses on the impact of light on human health, where effects on physical, mental, and biological changes are scientifically associated to specific light conditions. This is an area that programmable stage lighting manufacturers can capitalize on in the near future.

Research on the biological effects of lighting to support cognitive performance is expected to push manufacturers towards emotionally effective lighting product portfolios. Stage lighting to create stimulating environments will gain the interest of manufacturers and end users alike. Such innovations will boost the importance of LED lighting, besides commonly known advantages such as carbon reduction, energy efficiency, and reduced operational costs.

LED tape products are gaining popularity for applications in both, industrial and household applications. Modern versions are designed to boost durability, in addition to creating seamless lighting sources without the conventional breakup of individual LED bulbs. Improvements in terms of control over individual pixels allows applications in customized video content as well. Such innovations in programmable stage lighting help in reducing the gap between lighting and video display requirements.

What are the Key Challenges for Programmable Stage Lighting Manufacturers?

High initial capital requirements for programmable stage lighting devices are hindering sales and market growth. Prices of programmable solutions are estimated to be up to five times higher than conventional alternatives, owing to the integration of software in devices used to control light patterns, which pushes consumers towards traditional lighting solutions. In addition, lack of adequate training resources for individuals handling programmable lighting solutions will also adversely affect market growth.

Event organizers have been pushed to increasingly invest in training employees, or recruiting technical operators for making use of advanced lighting solutions. On the other hand, availability of cost-effective lighting kits from small-scale manufacturers, especially in developing countries, can hurt the sales of large-scale programmable stage lighting market players in the years to come. 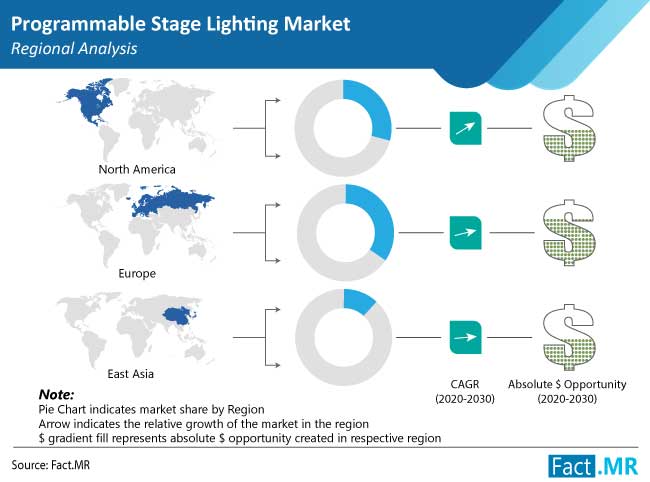 Why is the U.S. a Crucial Market for Programmable Stage Lighting?

The programmable stage lighting market in North America holds the largest share of global revenue, followed by countries in Europe. The United States accounts for the largest share, substantially surpassing Canada, while expanding at over 5% CAGR. These developed regions contribute to the industry with higher demand for advanced event organization infrastructure.

Also, the United States is home to the headquarters of numerous large organizations and corporate companies. The country also hosts a number of international events and conferences. According to Billboard, the U.S. annually hosts more than 800 music events, attracting several million attendees, generating key sales opportunities for market players.

What are the Prospects for the Japanese Market?

Japan is one of the largest economies in the world, and is a major hub for cultural and organizational activities. Major investments in urbanization and an open economic structure have resulted in substantial industrial growth in the country. Consequently, the country has witnessed an increase in the number of corporate events. Subsequently, demand for programmable stage lighting is also expected to rise in the future to organize and execute events with better audience engagement.

Also, Japan is a pioneer in terms of adoption of IoT solutions, especially for the APAC region, which is supported by demand from small and medium enterprises. As a result, Japan represents significantly high demand for intelligent stage lighting products.

Why is China a High Potential Market for Programmable Stage Lighting?

The programmable stage lighting industry in Asia Pacific is reflecting relatively faster growth with significant impetus provided by entertainment industries in the region. As per the International Energy Agency, China leads in the production of lighting systems, benefitting from major incentives and subsidies by the government, resulting in low prices at approximately US$ 3 to 5 per LED light bulb.

The Chinese event/ MICE (Meetings, Incentives, Conferences and Exhibitions) industry has witnessed significant developments in recent years, in spite of a slower economy. Lower tier Chinese cities such as Tianjin and Wuhan have seen an influx of investments for the construction of hotels, convention centers, and other event venues, in line with rising demand for meeting spaces in China.

Compared to North America and Europe, the concept of eco-friendly events is still in its nascent stage in China, although government policies have become increasingly supportive of the idea. According to a study by Tsinghua University, only around 5% of venues have implemented sustainability policies as a parameter for setting events and meetings.

Key markets in Latin America such as Brazil and Mexico are projected to witness steady growth in terms of revenue, driven by increasing awareness about varied products available in the programmable stage lighting sector in the region.

The live entertainment industry in Brazil is witnessing rapid expansion, which is generating increased demand for innovative lighting setups. Live events such as sports, music concerts, and other entertainment shows are witnessing major investments in the country.

Which Type of Lights are Widely Used for Stages?

Demand for LED lights is relatively higher than other options, and the trend is expected to continue in the foreseeable future. Environment-friendly and long lifecycle characteristics drive demand. As per the International Energy Agency, LED costs are expected to continue falling in the near future, and will likely account for approximately 90% of overall sales by 2030.

Laser programmable lights, on the other hand, will reflect faster growth. This can be attributed to higher information transmission capabilities and lower levels of leakage.

On the basis of product type, the market has been segmented into strip lights, moving head lights, and PAR can lights. Strip lights have emerged as the leading revenue contributor to this market, and the trend is expected to remain unchanged in the near future. This has been attributed to relatively low costs. Moving head light setups are estimated to display steady growth in the near future.

In 2018, members of the EU voted to phase out older models of halogen compact fluorescent lamps by 2021, while also setting up minimum quality and performance standard parameters for LED lamps and other light sources.

How is Lighting at Entertainment Places Contributing to Market Growth?

Also, increased celebrations during festive seasons and the resultant spending across the globe for varied venues, including clubs, parks, buildings, and bars, will drive demand for programmable stage lighting in the near future.

How are Wi-Fi-based Offerings Set to Fare?

In terms of function, Wi-Fi is similar to Bluetooth, as it makes use of radio waves for high-speed data transmission over short distances without the requirement for wired connections. However, in terms of programmable stage lighting, Wi-Fi-based setups are witnessing increased demand. This can be attributed to signal transmissions at lower power frequency, allowing event organizers to use multiple devices with a single transmitter device.

Over the years, Wi-Fi technology has gone through a number of standardization processes, regulated by bodies such as the Institute of Electrical and Electronics Engineers (IEEE), which has resulted in superior bandwidth capabilities for data transfer, making it an optimal choice for intuitive lighting setups for the foreseeable future.

Key players in this largely fragmented market space are largely focused on product development and launch strategies, in addition to industry collaborations aimed towards leveraging the significant potential of sales arising from emerging markets.

How will the programmable stage lighting market expand through 2031?

As per the Fact.MR market study, the market is likely to display steady growth supported by significant investments from the event management sector in stage aesthetics, at a CAGR of more than 5% through 2031.

Which is the dominant region in this market?

Europe is currently the leading market for programmable stage lighting. The market is driven by a matured event management sector, easy access to new lighting technologies, and higher capital expenditure in the event sector.

The COVID-19 pandemic has adversely affected developments in the industry. Strict lockdown restrictions in 2020 and the cancellation or postponement of live events around the world have severely curtailed short-term demand. Demand is likely to recover

Which are some of the prominent market players?