The global softgel capsules market has gained momentum and is slated to expand at a steady CAGR of 5.5% from 2021 to 2031, owing to their diverse usage in the pharmaceutical sector in treating cardio vascular, inflammatory, and other diseases. With high prevalence of such diseases and advancements in manufacturing techniques, industry players are gaining traction across the globe.

The latest report on ‘softgel capsules’ by Fact.MR provides detailed analysis on the global industry growth scope, potential, demand-supply patterns, and crucial factors for the forecast period of 2021 to 2031. According to the report, stakeholders will eye lucrative markets such as North America, Europe, and Latin America, while high requirement for gelatin softgel capsules will have significant contribution to industry growth.

The softgel capsules industry has flourished on rising investments by emerging key players over the past decade, while rise in cases of cardio vascular diseases has played a vital part in raising demand from the pharmaceutical sector.

Increase in focus on bringing in a wider variety of gelatin softgel capsules to meet high demand for usage as vitamin supplements has further catered to the industry growth. According to Fact.MR, the global softgel capsules market has remained positive for manufacturers and suppliers during the last 5 years from 2016 to 2020 despite getting temporarily declined in 2020 due to the COVID-19 outbreak.

As the pharmaceutical gained ground at the end of the year 2020, sales of various gelatin and non-gelatin softgel capsules has been gaining traction. Additionally, governmental expenditure in the medicine & healthcare sector, increase in per capita expenditure on healthcare, and growing awareness regarding cardio vascular diseases are indirectly fuelling sales of softgel capsules. According to Fact.MR, the global softgel capsules industry is predicted to expand at around 5.5% CAGR through 2031.

Why is Application of Softgel Capsules Growing in Pharmaceutical Sector?

According to a report titled “Japan- Pharmaceuticals”, published by Select USA on 6th September 2019, the pharmaceutical industry is the best prospect industry of Japan, while total local production increased from US$ 60.96 billion in 2016 to US$ 61.95 billion in 2018. As stated in a report published by Select USA, the United States pharmaceuticals sector is highly progressive, while U.S. firms conduct over half the world’s research & development (R&D) activities, which are worth US$ 75 billion. This data indicates new opportunities awaiting softgel capsule manufacturers in the pharmaceutical sector.

What are the Key Challenges Faced by Softgel Capsule Manufacturers?

While softgel capsules have wide application in various medicines and nutritional supplements, there are a few factors that often act as restraints for key players, such as-

However, the advantages of softgel capsules outpace these few negative factors, and also, rising R&D activities in bringing in a wider and cost-effective variety of products are expected to favor suppliers in the near future. 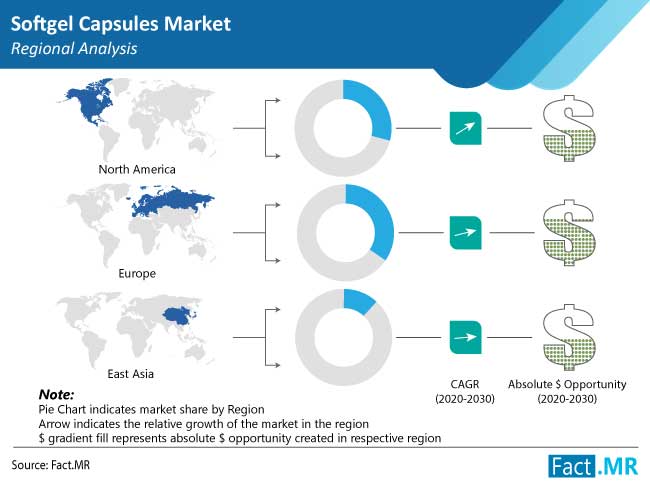 How are Softgel Capsule Manufacturers in the United States Gaining High Revenue?

Softgel capsule manufacturers have witnessed significant demand growth from the pharmaceutical and healthcare sector in the past years, and expected to come across new opportunities in the foreseeable future. Being a major shareholder in the world’s largest softgel capsules industry - North America, the United States is subject to further growth owing to rise in cases of cardio vascular diseases in the country.

According to a report titled “2021 Heart Disease and Stroke Statistics Update”, published by the American Heart Association on 27th January 2021, cardiovascular disease is one of the leading causes of death in the United States, accounting for 868,662 deaths in 2017. As stated in a report published by Select USA, incorporation of cutting-edge technologies in the medical, pharmaceutical, and diagnostic sectors is changing the industry outlook in the United States rapidly. These factors imply lucrative growth scope for stakeholders in the United States softgel capsules space.

Why is Germany Highly Lucrative for Softgel Capsule Producers?

The market in Germany is driven by prominent demand from the healthcare sector and advancements in the manufacturing sector. As key end-use industries are getting back on their feet, softgel capsule suppliers in Germany are expected to get highly benefited over the coming years.

As stated in a report titled “Germany- Health Care & Long-Term Care Systems”, published by the European Commission (EC) in October 2016, Germany is one of the leading healthcare industries in the European Union (EU), with healthcare expenditure projected to increase by 1.3 PPS of Gross Domestic Product (GDP) through 2060. This indirectly indicates ample opportunities awaiting or players in the country.

China has been in the focus of softgel capsule suppliers since the past decade, owing to rise in requirement from the healthcare and pharmaceutical sectors. Furthermore, growing investments in R&D activities and the pharmaceutical sector by the government are fuelling the sales in China.

According to a report titled “China- Pharmaceuticals”, published by SelectUSA on 30th July 2019, China is the world’s largest producer of pharmaceutical ingredients, while the pharmaceutical industry value reached approximately US$ 154 billion in 2020 from US$ 134 billion in 2018. As per the report, factors raising the healthcare industry’s value in China are-

These, in turn, are creating new avenues for softgel capsules manufacturers in the country.

Why is India in the Focal Point for Softgel Capsule Manufacturers around the World?

India has emerged as a highly lucrative market for softgel capsules over the years. Highly progressive healthcare and pharmaceutical sector coupled with growing investments on R&D activities are catering to the growth of softgel capsule manufacturers in India.

According to a report titled “Pharmaceutical Industry in India: Invest in Pharma Sector”, published by Invest India, the National Investment Promotion & Facilitation Agency on 22nd March 2021, India’s pharmaceutical industry ranks 3rd in the world for production by volume and 14th by value, while the country has the largest number of US-FDA-compliant pharma plants outside the United States. This explains why softgel capsule suppliers are drawn towards India in order to increase their sales footprint.

Which Product Accounts for High Revenue of Softgel Capsule Providers?

Presently, gelatin softgel capsules are the most sought-after in terms of product, and are set to remain in the leading position through 2031. Various features make them highly preferred across diverse end uses, such as-

Non-gelatin softgel capsules are another key segment expected to fuel sales further over the coming years.

Where is Application of Softgel Capsules High?

Healthcare is another key segment catalyzing the growth of industry players in terms of application.

With the competition getting stricter, softgel capsule manufactures are developing a wider variety of products in order to fully leverage the industry’s potential.

Which are the top companies manufacturing softgel capsules?

Which are some of the lucrative markets for softgel capsules?

The United States, Germany, China, India, Japan, the United Kingdom, Canada, France, Italy, and a few others are lucrative markets for softgel capsules, and are expected to dominate throughout the forecast period.

Which application accounts for high sales of softgel capsules?

Presently, the pharmaceutical sector is the most lucrative in terms of application, and is expected to remain dominant over the forecast period of 2021 to 2031.

Presently, gelatin softgel capsules have high demand, and are predicted to sustain this position throughout the forecast period.