In the earlier times, the limited availability of belt systems had led to various types of constraints, thereby limiting growth of belt loaders market. But, advancements in technology and diversified demand has drastically revolutionized the belt loaders market.

Be it an existing framework or a new manufactory, production ramp up without a pre-planning might lead to workplace congestion.

Thus, deployment of belt loaders has turned out to an imperative across several industries for ensuring seamless production, thereby bolstering growth of belt loaders market.

In case of minimal or compact size of an inventory lot, use case of belt loaders market comes into picture for moving inventory to the next workstation. This helps in eliminating a big deal of material handling personnel and equipment, thereby creating an advantage for belt loaders market.

Furthermore, belt loaders market have also gained advantages by helping in reduction of work-in-process inventory migrating between work stations. Belt loaders market find extensive applications in the wake of their efficiency of handling loads irrespective of size and shape, primarily in production and process work.

In addition to that, belt loaders market have also witnessed surging demand for upgrading productivity and efficacy matrix of various industrial facilities. On the flip side, factors like high initial investments and inconvenience of flexibility are foreseen to hamper growth of belt loaders market.

Which Region is expected to Dominate Retail & Distribution for Belt Loaders Market?

US belt loaders market valued around USD 152 Million in 2021 and is expected to cross market valuation of USD 163 Million by 2022, covering around 58% of North America belt loaders market share during the same. In addition, due to big deals anticipated to occur under material handling personnel and equipment business will thereby create an advantage for belt loaders which is projected to grow at 4.3% CAGR during the forecast period of 2022-2032.

Various leading industries such as food & beverages, retail, airport, and automotive are are available in US, registering for a high demand from belt loaders market to cater to the industrial requirements. Thus belt loaders business in US is anticipated to gain 910 BPS during the same forecast period. 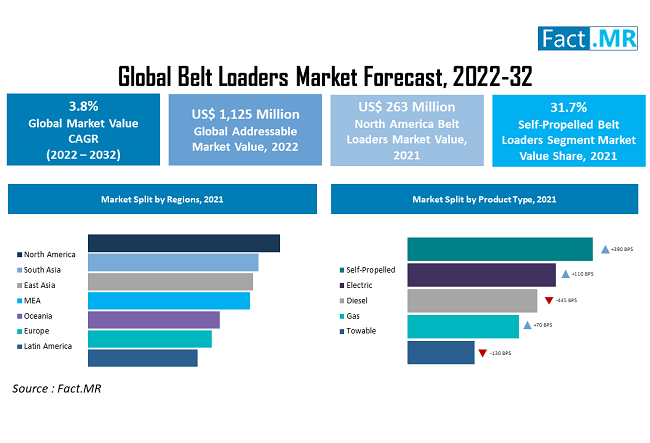 Which Product Type is expected to be the Largest Contributor during the Forecast Period in Belt Loaders Market?

These belt loaders offer enhanced features and functionalities, which makes it widely-deployed among all other types in belt loader market, thus estimated to gain 390 BPS during the assessment period of 2022-2032 by covering ~36% of market share in 2032. Moreover, it is also sought incessantly due to its versatility and capability to offer a right-sized performance. This, in turn, helps self-propelled belt loaders retain its legacy in terms of market revenue.

Comprehending the aforementioned factors, self-propelled belt loaders is projected to grow with CAGR of 4.4% during 2022-2032 and is forecast to surpass market value of USD 324 Million by end of 2032.

The global belt loaders market is highly fragmented and competitive owing to the existence of many domestic and regional players. Various marketing strategies are adopted by key players such as mergers and acquisitions, expansions, collaborations and partnerships.

Also, new product development as a strategic approach is adopted by the leading companies to upscale their market presence among consumers. These strategies have resulted in the incorporation of advanced belt loaders.

The global value of belt loaders market is estimated to be worth over USD 1,125 Million in 2022.

North America topped the global belt loaders market accounting for 25% of its total market valuation in 2021.

*102 figures and 70 tables includes by FactMR