With new advancements in material technology, the plastic processing industry is becoming more dominant in today’s world. Due to its toughness and low price, demand for plastic is rising, especially from low-income countries.

This incidentally creates enormous demand for vacuum loaders, for utility in loading and conveying materials such as powder, pellets, regrind, resin, etc., in the industry.

Apart from that, pharmaceutical and food processing industries are other end users that require vacuum loaders to perform their industrial operations.

Fact.MR, in its latest research report, offers insights on key factors that are expected to fuel demand for vacuum loaders over the coming years.

The report sheds light on the trends in 20+ high-growth countries, where the regions of North America, Europe, and Asia lead the way. It also details what impact the COVID-19 pandemic has had on this space.

From 2015 to 2019, the global vacuum loaders market exhibited a CAGR of around 5%. Growing number of end-use industries is expected to fuel demand over the coming years.

Increasing customised vacuum loaders, rental activities, and innovations are some of the other driving forces in this space.

Owing to these broad factors, demand is likely to increase at a CAGR over 5% throughout the 2020 to 2030 assessment period, especially from the plastic processing, pharmaceutical, and food processing sectors.

What Role will End-use Industries Play in Fuelling Demand for Vacuum Loaders?

From 2006 to 2016, output from the plastic industry rose from 245 million tonnes to 348 million tonnes (according to Plastics Europe Trade Association).

he industry has been witnessing rising utilities across a number of sectors in recent decades. Plastic production is observing a shift from Western countries to Eastern countries such as China and India.

This shows the enormous demand emerging for the plastic processing industry from this region, which is consequently impelling demand for vacuum loaders.

Chemicals (pharmaceuticals) and food processing industry has also created invariable requests for vacuum loaders due to their ability to efficiently convey materials while maintaining hygiene during the process.

Despite rising regulations against plastic use in numerous countries, applications generating from advancements in material technology, for instance, production of reusable plastic, are assisting market growth.

What Impact do Governments Regulations Have on the Vacuum Loaders Space?

According to the World Resources Institute and United Nations, there are now more than 127 countries that have adopted some amount of legislation to regulate the plastic industry and its ill effects.

Use of reusable bags has been incentivised in some countries such as Vietnam and Uzbekistan.

These attempts are seriously obstructing the growth of vacuum loaders, as most demand comes from plastic processing industries. Some of the issues pertaining to regulations on the use of single-use plastics could be addressed with the help of reusable plastics.

Some companies such as Summit Systems have already started a recyclable segment, which is expected to balance the effect of the regulations during the forecast period.

Apart from this, vacuum loader usage is largely encouraged by governments in industries such as food processing and pharmaceuticals, as these loaders offer a more efficient and hygienic way to load materials.

Also, as automation has brought significant changes in the standard of living of people in developed economies such as South Korea and many European nations, adoption of vacuum loaders in expected to increase at a faster rate across low-income countries over the coming years.

What are the Key Challenges for Vacuum Loader Manufacturers?

Apart from government regulations that are hampering the market in numerous developed countries, vacuum loaders suffer due to some limitations such as limited material conveying distance.

Range of operation for vacuum loaders varies from 20 – 150 ft., which is a very small distance to perform functions in a large industry. This compels end users to install central conveying systems, which convey till a distance up to 1,000 ft.

While providing an advantage to small-scale industries to place self-contained vacuum loaders even at any concise space, it also takes away the functionality of the system to operate remotely, as can be done with centralised vacuum loaders.

Furthermore, in self-contained vacuum loaders, cleaning is done with the pulse blowback at the loader using compressed air. While, in central conveying systems, the screens are washed when the receiver vacuum valve opens at the end of the cycle.

Therefore, in general, large business operations do not prefer having a plant full of separate loaders, and by replacing loaders with a central conveying device, any processor can significantly increase plant performance and minimise energy and labour costs. 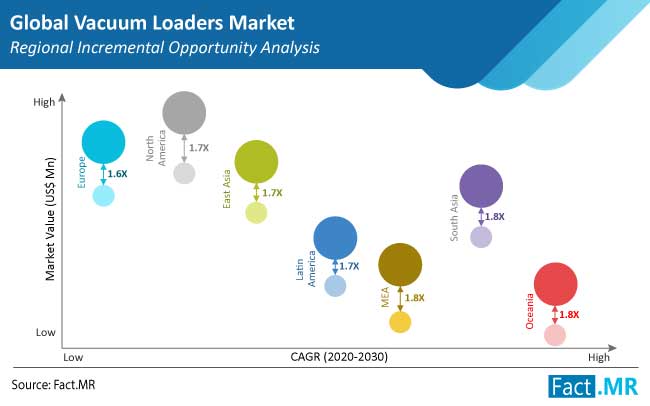 What Makes China a Leading Market for Vacuum Loaders?

China is the largest producer as well as exporter of plastic-made goods in the world. The country produces over 60 million tons of plastics products worth nearly US$ 20 billion, annually.

China’s key industry having large plastic consumption is construction, which utilises more than 20% of plastic consumed. One of the potential industries that ensures the requirement of vacuum loaders is the recycled plastic industry.

Establishment and functioning of these industries would require a large number of vacuum loaders for bulk material in their premises.

Food industries in China have an industrial output of more than 460 million tonnes per year, which shows the prospective purchase requirement of vacuum loaders in the country.

Also, with China being the largest producer of steel in the world, manufacturers would experience ease in getting raw materials by establishing their units in the country, thereby increasing the need for vacuum loaders.

The market in Greater China is expected to expand at a CAGR of nearly 5% during the forecast period. The country has huge potential for plastic processing, which currently holds a market share of around 83% as far as vacuum loader demand is concerned.

The largest segment that utilises plastics in the U.S. is the packaging industry. This sector holds over 51% of the plastic processing industry share. Being the 3rd-largest exporter of plastic-made products, the country has proved its potential for vacuum loaders.

The United States has 288 robots placed in industries per 10,000 employees, and the rate of deployment, which is over 4%, shows tremendous market opportunity for automation.

The United States’ food industry is the largest in the world, which creates opportunity for vacuum loader manufacturers to grow in this segment of end use.

The market in the U.S. is anticipated to expand at a CAGR around 5% during the forecast period. The country has huge potential for plastic processing, which currently holds a market share of over 15% for vacuum loaders.

(500-750) lb/hr throughput vacuum loaders currently hold a significant share of over 26% in the market.

How is the Automation Trend in Germany Influencing Demand for Vacuum Loaders?

Germany is one of the leading plastic exporting countries, currently holding the 2nd rank by shifting the U.S. to the 3rd place. With exported dollar value of plastic worth US$ 9 billion, Germany produces around 14.5 million tons of plastic per year.

Germany has a well-established automotive and infrastructure industry, which requires plastic-made products in large amounts. With 346 robots deployed per 10,000 employees, it is the third-largest country having automation systems deployed in the industrial sector, after South Korea and Japan. All these significantly enhance the market attractiveness index for Germany among all other European nations.

The market in Germany is anticipated to expand at a CAGR of more than 4% over the next ten years. The country has huge potential for plastic processing, which currently holds a market share of around 77% for vacuum loaders.

Germany currently holds a share of more than 15% in the European market regarding vacuum loaders, and is expected to reach a market value of nearly US$ 6 Mn in 2030.

Which Vacuum Loader, Based on Throughput, Has the Highest Market Share?

Market attractiveness of the (150-500) lb/hr vacuum loader is considerably higher when we compare it to low throughput vacuum loaders.

Reason is large number of small-scale industries purchasing vacuum loaders having medium throughput. Its share in the global is over 30% for the year 2020, and is expected to increase by 0.5% by 2030.

How Big is the Opportunity for Vacuum Loaders in Plastic Processing?

Plastic processing has the largest share in the vacuum loaders market as an end-use industry. This segment, however, is expected to experience a BPS of -16 over the forecast period, showing the shift of consumers from plastic processing to food processing during this period. 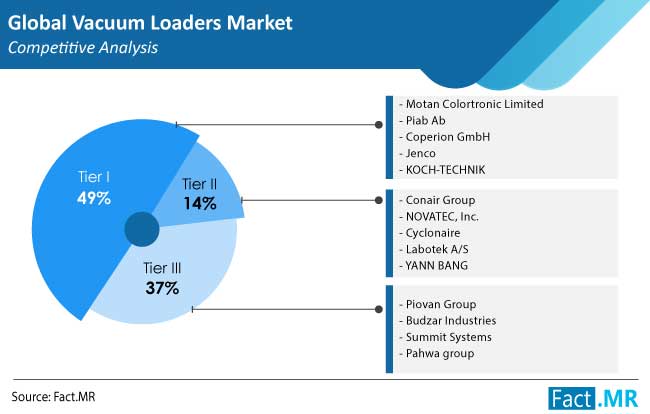 The vacuum loaders landscape has numerous companies having a regional as well as global presence. Companies mainly focus on customized fabrication, robots, and other divisions that are comparatively new from previous models.

Q1. Which is the most lucrative market for vacuum loaders?

Currently, North America and Europe lead the global vacuum loaders market. According to Fact.MR, they will account for nearly half of the market share in terms of value.

Q2. Which type of power supply is highly sought-after in vacuum loaders?

Q3. Which industry accounts for higher sales of vacuum loaders?

Currently, plastic processing accounts for the highest sales of vacuum loaders in the world, according to Fact.MR analysis. However, the food industry and pharmaceuticals are expected to experience higher CAGRs over the next ten years.

Q4. How will the vacuum loaders market expand until 2030?

Fact.MR projects the global market to register a CAGR over 5% across the 2020-2030 assessment period. High investments in end-use industries, especially plastic processing and food processing, are expected to drive demand in future.

Q5. Which are some of the leading companies offering vacuum loaders?