The revised report on ‘biometrics middleware’ by Fact.MR provides detailed insight of the global industry along with the growth & restraining factors, new trends, and demand-supply patterns for the forecast period of 2021 to 2031. This edition brings readers up-to-date with key market developments, providing analysis on how manufacturers and other stakeholders are reacting to change. Key industry metrics have been captured, and their impact on sales has been analyzed.

According to the report, North America and Europe will hold major shares of the global industry value, while the market in Asia Pacific will register the fastest growth over the forecast period.

Biometrics middleware has gained traction in the past years with rising demand from BFSI, healthcare, and various government sectors. With reliable security solutions gaining ground across diverse end-use segments, suppliers and manufacturers have invested further in research & development (R&D) activities in order to manufacture advanced products. Overall, the industry outlook for biometrics middleware has remained positive during the last 5 years from 2016 to 2021, apart from a temporary decline in 2020.

While incorporation of cutting-edge technologies such as artificial intelligence is aiding market expansion, the trend of digitalization is creating lucrative revenue streams for industry players. Furthermore, rising adoption of biometrics middleware in military, law enforcement, and other governmental sectors is expected to fuel the sales of manufacturers through 2031.

How is Adoption of Artificial Intelligence Spearheading Demand for Biometrics Middleware?

As biometrics middleware providers are incorporating artificial intelligence in developing new products, it is pushing the demand-supply graph upwards around the globe.

AI-driven biometrics have extensive application in different domains, such as-

The National Institute of Standards and Technology (NIST) has taken up an initiative named “Executive Order on Maintaining American Leadership in Artificial Intelligence” in 2019, in order to develop technical standards and related tools in support of reliable and robust systems equipped with AI technologies. This, in turn, is aiding the growth of biometrics middleware providers.

What are the Key Challenges Faced by Biometrics Middleware Providers?

Despite having unlimited security features, biometrics middleware is expensive and often not affordable by small to medium institutes or residential sector users. Also, there are a few negative sides that act as restraints to key players, such as-

However, these few disadvantages of biometrics middleware are outpaced by its various advantages, and hence, manufacturers are optimistic of new opportunities coming their way. 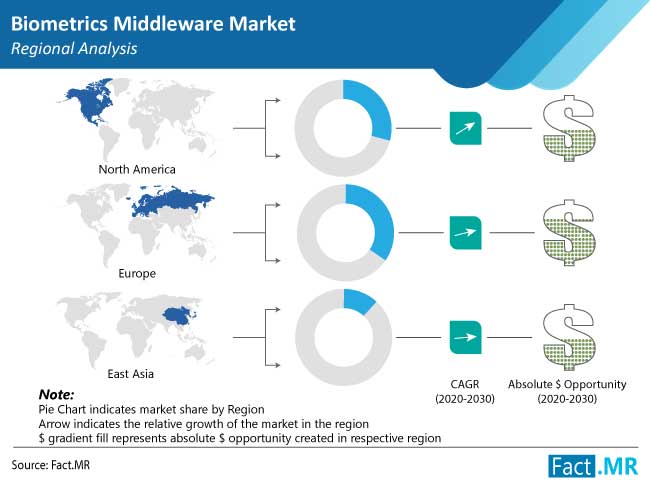 What’s Increasing the Profit Margins for Biometrics Middleware Suppliers in the United States?

According to a report titled “Software & IT Industry Spotlight”, published by SelectUSA on 9th November 2015, more than 40% of the US$ 5 trillion global IT industry is in North America, primarily in the United States. As stated in the report, the United States IT sector accounts for US$ 1.8 trillion of the U.S. value-added Gross Domestic Product (GDP) and 11.8 million jobs. These statistic imply the unlimited opportunities for players in the U.S. biometrics middleware market.

How Lucrative is the Opportunity for Biometrics Middleware Providers in Germany?

Germany has emerged as the most lucrative country in the world’s second-largest biometrics middleware industry - Europe. Increase in requirement from BFSI, governmental, and other sectors coupled with digital advancements are propelling market growth in Germany.

As stated in a report titled “Financial Sector- Germany”, published by the Germany Trade and Investment (GTAI) organization, in Germany, financial services and insurance providers contributed nearly EUR 120 billion to the GDP in 2019, which is equivalent to almost 4% of total domestic GDP. These statistics indirectly point towards the new opportunities for biometrics middleware manufacturers in Germany.

China has been leading in the world’s fastest-growing biometrics middleware industry - Asia Pacific, and is predicted to maintain its position during the forecast period. Backed by highly advanced digital, IT, residential, and healthcare sectors, China is in the limelight for biometrics middleware providers.

According to a report titled “Technology and ICT China”, published by China Country Commercial Guide on 30th July 2019, China’s Information and Communication Technology (ICT) industry is among the most dynamic sectors in the country. As per the report, by the end of the year 2021, the industry is projected to reach US$ 8.1 trillion, representing 55% of China’s GDP. This gives an estimation of how big the opportunity is for biometrics middleware developers in China.

India is a highly lucrative market for biometrics middleware, owing to its well-developed manufacturing infrastructure and growing adoption of modern technological solutions by industry players. With demand from governmental and IT sectors rising again, India is expected to remain in the limelight for biometrics middleware manufacturers throughout the forecast period.

As stated in a report titled “Software and Services Sector”, published by the Ministry of Electronics and Information Technology on 10th January 2020, the Indian Information Technology Enabled Services Industry is highly progressive and subject to further advancements. While this is expected to positively impact the revenue of industry players, the pandemic affected this sector and the effects are expected to last over the next couple of years. However, demand from governmental transportation, financial law enforcement, and other sectors is expected to make up for the deficit to some extent.

Which Product Type is Fuelling the Sales of Biometrics Middleware?

Presently, biometric software is highly popular among various end-use sectors due to its unlimited advantages, such as-

Services is another lucrative segment in terms of product type, which is spurring the growth of biometrics middleware suppliers.

Which End-use Sector is Leading Demand for Biometrics Middleware?

Presently, BFSI, healthcare, and other government sectors are leading in the demand for biometrics middleware in terms of end user, and are expected to remain in the position throughout the forecast period.

Biometrics middleware is highly sought-after across these sectors for-

Other key end-use sectors bolstering market growth are IT, institutions, and the residential sector.

With the competition getting fiercer, key players in the biometrics middleware market are launching a wider variety of products in order to sail through the strictly competitive environment.

Some of the key players supplying biometrics middleware are-

The United States, China, India, Japan, Germany, the United Kingdom, France, Canada, Italy, and a few others are lucrative markets for biometrics middleware, and are expected to dominate throughout the forecast period.

Presently, software is the most lucrative segment in terms of product type, and is expected to remain dominant over the forecast period of 2021 to 2031.

Currently, BFSI and governmental sectors account for high sales of biometrics middleware, and are predicted to sustain this position throughout the forecast period.