Orchestration is a middleware-based technology, which enables establishing the highly centralized part of architecture to govern business process definitions’ design and execute the business process logic.

Digital transformation is creating and triggering high demand for integration & orchestration middleware, as it calls for the connection of new digital capabilities with already existing assets and processes.

This integration provides coordination between end-to-end applications. It is essential to manage application programming interface (API) after the process of coordination, as well as manage, deliver & receive data.

Integration of middleware along the digital transformation, which is based on IoT, converts the IT accessible event format for further assembly and analysis.

In addition, API management serves as a connection between web services and their authorized users. This effective and efficient digital transformation is a key factor driving demand for integration & orchestration middleware. 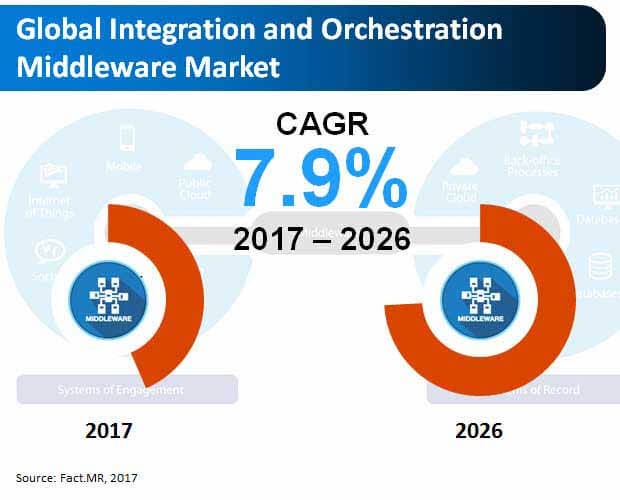 Middleware tools that are currently being employed are relatively lighter in nature, and utilized on the cloud for enhancing flexibility and scalability of their daily operations.

Enterprise application is where majority of the growth is witnessed via utilization of the agile and cost-effective could technology.

Developers are capable of maintaining and building application without infrastructural challenges, with the help of PaaS.

The global market for integration & orchestration middleware is set to exhibit an impressive CAGR through the period of forecast (2017-2026), according to Fact.MR’s recently published report.

Worldwide integration & orchestration middleware sales will surpass revenues worth US$ 18,500 Mn by 2026-end.

A recent evolution driving expansion of the integration & orchestration middleware market in North America is consumerization.

Consumerization helps users in integrating and automating applications by themselves, thereby reducing the service costs.

Integration & orchestration middleware market will remain the most remunerative in North America, followed by Europe. The market in Asia-Pacific excluding Japan (APEJ) will continue to exhibit the fastest growth through 2026.

Based on middleware type, business to business middleware will latch onto a major portion of the market’s revenue share during the forecast period.

Business to business middleware is considered to be a strategic asset for organizations, as huge amount of valuable data is generated through B2B systems. However, integration middleware will account for the largest market revenue share by 2026-end.

Key market players are continuously focusing on coming up with innovative solutions in order to strengthen their position in the market. These players are also pitching their existing products on the back of high demand.

Fact.MR’s report has profiled active players contributing to growth of the global integration & orchestration middleware market, which include

According to Fact.MR, Integration & Orchestration Middleware sales experienced a CAGR of 7.9% from 2017-2026.

The Integration & Orchestration Middleware Market is likely to acquire a global market share of US$ 18,500 Mn by the end of 2026.

*87 figures and 111 tables includes by FactMR