In 2022, the global smartwatches market is valued at US$ 23.5 billion and is predicted to reach US$ 121.5 billion by the end of 2032. Smartwatch sales statistics, as per this revised Fact.MR study, predicts market expansion at a stellar CAGR of 17.8% through 2032.

Apple dominates the smartwatch market and has sold the highest number of units of smartwatches since 2015 when it launched its first watch. While it may have seemed that Android-operated smartwatches would be highly popular over the coming years, Apple’s newly launched smartwatches are expected to put a dent in those expectations.

Smart devices have become a crucial and integral part of people’s lives over the past few years and increasing digitization will only bolster this trend in the near future. Smartwatches are one of the most popular smart devices that have gained unprecedented sales and popularity in recent times.

The future scope of smartwatches is completely dependent on technological advancements in the industry and innovation by smartwatch manufacturing companies such as Apple, Garmin, Fitbit, and Samsung is expected to be of paramount importance over the years to come.

However, the strong market presence of traditional watches is expected to restrain overall smartwatches market potential to a certain extent through 2032. Worldwide shipments of smartwatches are anticipated to surge at a CAGR of 17.8% from 2022 to 2032. 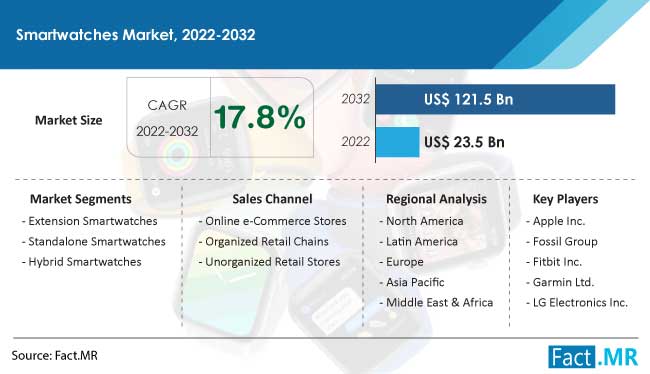 Which is the Main Target Market for Top Smartwatch Brands?

Young people are more aware of their health and fitness than ever before and their increasing standards of living are expected to make them favorites for top smartwatch brands.

Increasing urbanization and digitization in Gen Z and the millennial generation are also expected to drive smartwatch shipments among young people through 2032.

How is High Per Capita Income Factoring in for Smartwatch Sales?

Disposable income in developing and underdeveloped economies has been increasing over the past few years and this trend is expected to favor the overall demand for smartwatches over the coming years. A high per capita income increases the consumer spending potential and this could positively impact shipments of smartwatches through 2032.

Economies such as India and China are witnessing a spike in smartwatch sales owing to high disposable income and the same trend is expected to be observed across the world over the years to come.

This revised smartwatches market study by Fact.MR, a market research and competitive intelligence provider, gives a detailed assessment of all the key smartwatch market trends that could influence the market growth over the next ten years.

What is the Demand Outlook for Smartwatches in the U.S.?

The United States is known for its early adoption of advanced technologies and the nation is at the forefront when it comes to the use of smart devices as well. Expenditure on advanced tech products in the country is higher than ever with both elderly as well as young people opting for smart devices such as smartwatches, smart locks, smart cameras, etc.

Adoption of smartwatches by the elderly is expected to increase owing to the launch of smartwatches designed for the aged people, rising demand for remote monitoring, and increasing awareness of technology and favor the market for smartwatches in the U.S.

Moreover, the presence of key smartwatch suppliers such as Apple is also expected to provide new opportunities in the smartwatch market. Increasing awareness of fitness and health coupled with a high prevalence of obesity is also projected to bolster smartwatch demand in the country through 2032.

Why is India Becoming a Hub for New Smartwatch Companies?

Technological proliferation in India has increased exponentially over the past few years and this trend is expected to be prominent over the next ten years as well. Adoption of smart devices and wearables is on the rise in the country and this is expected to bolster sales of smartwatches through 2032.

Indian start-ups are also scaling up with acquisitions to improve their global market presence and business potential.

Which Operating System Will Be More Popular in Smartwatches Going Forward?

The watch OS segment is anticipated to account for a dominant market share over the coming years owing to high sales of Apple watches. The watch OS has gained massive popularity owing to the simplicity of the UI and features that it provides.

However, Android-operated smartwatches are anticipated to witness a hike in sales over the coming years as they step up and provide advanced features with better connectivity than that of watch OS-operated watches.

Smartwatch suppliers are focusing on product innovation and technological advancements to gain a competitive edge over other market players and increase their revenue generation potential.

The global smartwatches market accounts for a value of US$ 23.5 billion in 2022.

By 2032, the global market for smartwatches is predicted to reach US$ 121.5 billion.

The young population that is growing more aware of fitness & health is the main target market for smartwatch suppliers.