Boom in demand of safer vehicles has been noted is recent past. Acceptance of safer vehicles as per NCAP testing became primary enabler for growth of this market. Moreover, low regional disparities and optimized cost for such advanced technology is anticipated to provide lucrative opportunities to its manufacturers in upcoming half-decade.

Mandatory rules implemented by government on the usage of advanced seatbelts and airbags hiked demand for pressure sensors and tension sensors in the market.

Thus, the key factors driving industry growth are the increasing number of accidents, government rules & regulations related to vehicle safety, increasing purchasing power of the consumers, increasing demand for luxury vehicles, and the increase in the demand for the passenger vehicle in the fast evolving economies are key market trends that are likely to support the growth of the market.

Historically, the occupant classification system market value observed a growth of 4.2% CAGR from 2017 to 2021. The global occupant classification system market has produced an absolute dollar opportunity of closely to USD 422 Million in the last half-decade. It is projected to create an absolute dollar opportunity of more than USD 1 Billion and USD 1.7 Billion in during 2022-27 and 2022-2032 respectively.

Further, South Asia & Oceania occupant classification system market has seen remarkable increase in the last half few years owing to various government indicatives and consumer awareness towards the safety & security. It has gained significant market share which is likely to continue at a CAGR of 8.7% in assessment period.

An increase in the number of vehicles in operation (VIO) and a growing focus on the installation of automated safety measures in automobiles present prospects for producers of occupant classification systems.

The increasing dependence on electronic systems to improve safety of the passengers, vehicle performance and comfort, has prompted automakers to incorporate sensor technology in sophisticated vehicle models. Sensor innovation is amongst the most trending ecosystems in the automobile sector, with significant stakeholder investment.

Over the last five years, occupant classification system makers have seen a number of partnerships to integrate these technologies into new automotive models.

Automotive manufacturers, especially carmakers, are providing a variety of infotainment and other electronic features which drivers and passengers may operate. Nonetheless, an increasing number of functioning features within the vehicle pose the risk of driver distraction.

According to studies, visual and manual distractions are at the forefront of the reasons of driver distraction. As manufacturers and product development engineers work to design functionality features that need the least amount of driver attention, gesture detection systems based on various sensors and 3D tracking technologies continue to fall short of reaching maximum efficiency.

Revolutionary technologies are being developed in the automobile gesture recognition sector, with the goal of reducing driving attention and improving driver control and comfort at a low cost. Such innovations are likely to have an impact on the growth trajectory of the automotive gesture recognition market in the future years.

What is the North America Occupant Classification System Market Scenario?

Consumers' increasing disposable income, combined with their purchasing power, has pushed them to invest in their safety and security when travelling. Government terms and policies in the United States will promote demand for Occupant Classification Systems in the region. Because of the scarcity of transportation options, the motorization rate in the United States has risen faster than in the rest of North America.

Further, the newest breakthroughs in sensors and wireless technology are driving the desire for smart system adoption in automobiles in Canada. This aspect is also driving the expansion of occupancy detection in the Americas.

The Asia Pacific region is home to some of the world's most populous countries, including China and India. It also serves as a residence for developed countries such as Japan and South Korea. These countries are the world's largest vehicle producers. Furthermore, vehicle passive safety standards in these countries are improving. This, in turn, is driving the occupant categorization system market.

The Asia Pacific region has been ghettoized into two regions including East Asia and South Asia & Oceania. East Asia occupant classification system market is the important market from the growth perspective. It has acquired more than 1/5th market share of the global occupant classification system market in the last half-decade. 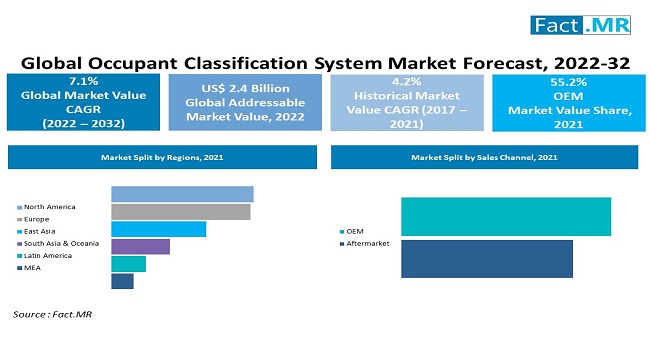 Further, it is expected to continue its dominance in occupant classification system market over the forecast period, in terms of value, which accounted for 3/5th value share in 2022. Additionally, the segment is predicted to grow at a CAGR of 2.6% and lose nearly 305 BPS by the end of 2032.

The OEM sales channel has acquired more than 55% global market share in global market. It is likely to witness growth at a CAGR of 7.2% during the forecast period. This is expected to generate absolute dollar opportunity of around USD 1.3 Billion to the occupant classification system market over the assessment period of 2022-2032.

The global occupant classification system market is highly fragmented, with a significant number of local and regional companies. As a vital strategy to support their market footprint and better fulfil the needs of customers, industry players are focusing on developing new goods in response to the dynamic industry needs.

Also, the key companies have adopted numerous strategies including merger & acquisition partnership, etc. product development is the key strategy to upscale their market presence among consumers.

For instance: On 22nd January 2022, Automated Driving: Bosch and Volkswagen Group extended period of their partnership for accelerating the introduction rate for advanced automated driving functions across all vehicle classes within upcoming half-decade.

The global value of occupant classification system market is estimated to be worth over USD 2.4 Billion in 2022.

The demand is anticipated to surpass USD 4.8 Billion by 2032 end.

*111 figures and 64 tables includes by FactMR