Historically, the market value of the stationary fuel cell system industry showed a growth of 12.2% CAGR from 2017 to 2021. The global stationary fuel cell system market has created an absolute dollar opportunity of nearly USD 1.2 Billion in the last five years. It is estimated to create opportunities of about USD 5.2 Billion and 14.1 billion by the mid (2022-27) and long-term (2022-2032) respectively.

Further, South Asia & Oceania stationary fuel cell system market has shown significant growth in the last half-decade. It has gained significant grow which is likely to continue in forecast period.

In addition, the rising investment in the industry is likely to increase the demand for stationary fuel cell systems in the region. South Asia & Oceania is projected to capture around 180 BPS and create absolute dollar opportunities of more than USD 976 million amid 2022 & 2032.

From the segmental analysis, based on technology, the PEMFC is the largest market shareholder. It has held more than 1/3rd market shares and is projected to grow at the CAGR of 15.7% by the end of 2032.

Earlier, the power generation was done through renewable resources and the combustion engine. But these technologies were unreliable since they were dependent over various natural and other factors.

However, a large number of industrial and commercial sectors are deploying these power systems to have full-time availability of power for systems that cannot run without energy. Today, the stationary fuel cell systems have emerged as an efficient and reliable alternative to combustion heat engines in order to produce electrical power.

Rapid Adoption is Likely to Transform the Overall Industry

Moreover, the stationary fuel cells systems are highly adaptable since they produce low noise. These systems can be installed anywhere since they are very quiet and have very low emissions.

Also, they require very small space when compared to any other energy generating technology. The stationary fuel cells systems have a capability to be connected directly to a natural gas infrastructure through which these systems can provide power even in the absence of grid power.

Covid-19 Pandemic Slowed the Growth of the Market

The new coronavirus has rapidly spread throughout numerous countries and areas, having a massive influence on people's lives and the general community. It began as a human health crisis and has since become a major threat to global trade, economics, and finance.

Further, the COVID-19 pandemic has halted the manufacturing of several items in the tool making industry, owing to continual lockdown in key countries. Market leaders can only pay for complete lockdown for a part-time before having to alter their investing strategies. Furthermore, the number of COVID-19 cases is projected to fall in the near future when COVID-19 vaccinations hit the market.

However, this is also predicted to result in the re-starting of tooling companies at full capacity, assisting the market to recover by the beginning of 2022. After COVID-19 positive cases begin to drop, standard parts for toll making manufacturers must focus on protecting their employees, supply networks and operations, in order to respond to urgent emergencies and build new working practices.

What is the European Stationary Fuel Cell System Market Scenario?

The European stationary fuel cell system market consists of numerous regional markets such as Italy, Spain Germany, France, etc. European markets account for around 16.2 of the overall market share. It is projected to increase at a CAGR of 21.2% in the forecast years. This is escalating demand for different types of technology based stationary fuel cell systems such in countries like France and the Germany.

In terms of value, the South Korean stationary fuel cell system market is the largest market in the East Asian market. It is estimated to rise at 21.7% CAGR and provide remarkable absolute dollar opportunities during 2022 - 2032. 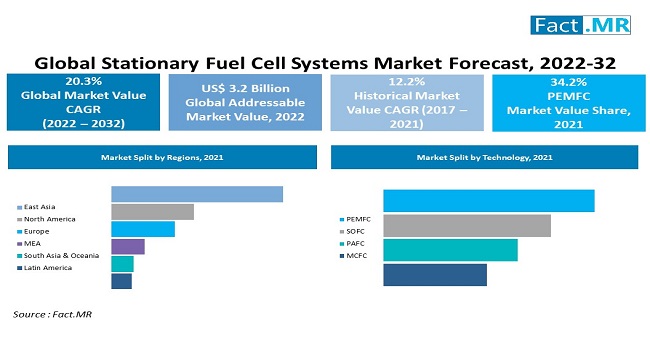 Which Technology Based on Stationary Fuel Cell System is Poised to Provide Maximum Revenue-Generating Opportunities in Upcoming Half-Decade?

Further, PEMFC is expected to dominate the Stationary Fuel Cell Systems market over the forecast period, in terms of value, which accounted for 1/3rd value share in 2022. Furthermore, the segment is predicted to increase at a significant CAGR than other segments and lose nearly 576 BPS by the end of 2032.

The stationary fuel cell systems are emerging class of technologies that have entered the commercialization phase. These systems are cleanest and the most efficient technology that can generate electricity and heat.

In addition, the application in combined heat and power (CHP) is projected to grow at a CAGR of 17.2% during the assessment period. This is likely to lose 662 BPS to the stationary fuel cell system market over the forecast period of 2022-2032.

The global stationary fuel cell system market is highly fragmented, with a significant number of local and regional companies. As a crucial strategy to strengthen their market footprint and better fulfil the needs of customers, industry players are focusing on developing new goods in response to the dynamic industry needs.

The global value of stationary fuel cell system market is estimated to be worth over USD 3.2 Billion in 2022.

Less than 1Kw under the power range segment contributes 38% of market share in global sales of stationary fuel cell system.

*119 figures and 64 tables includes by FactMR