Fact.MR estimates amorphous iron market value to reach USD 19,570 Million valuation by 2032 end, and shall account for nearly 3.4% of the overall iron alloy sales value during the same period.

In the meantime, amorphous iron consumption is projected to increase with a CAGR of around 6.4% over next decade while valuation being at USD 19.1 Billion by 2032 end, evaluates Fact.MR- a market research and competitive intelligence provider.

Moreover, production of amorphous iron stood at around 118 Kilo Tons in 2021, accounting for 4.5% of total iron alloys production and is poised to grow with a CAGR of around 5.8% with production projected to reach 219 Kilo Tons by 2032 end.

Attributed to properties of amorphous iron such as lower flux density and lower switching losses, its application at higher motor frequencies such as those above 350 Hz have seen a substantial surge.

Additionally, projections are that growing demand for energy efficient electrical appliances will provide thrust to the production of amorphous iron over next decade especially in high growth regions such as China and India. Consumption is anticipated to be concentrated in the discussed regions as energy cost in Asia is higher than most developed countries. This calls for efficient measure with faster payback.

Moreover, rising consumption of amorphous iron in motor application, is poised to grow with higher single-digit CAGR over the projected forecast period. Further, mounting research and development into manufacturing of energy efficient electrical components along with demand for more efficient power distribution systems will drive the consumption of amorphous iron 1.5X by 2032.

Moreover, substantial rise in energy costs and growing awareness regarding conservation of energy through the use of varied new electrical appliances, amorphous iron will find diverse applications as a magnetic material in a range of end-use applications.

Aim of adopting electric vehicles is to substantially decrease negative environmental impact and save energy. Since EV’s runs on batteries which converts electrical energy into mechanical energy, electromagnetic induction becomes an essential process for efficient running of cars. Electromagnetic induction process creates loss of heat which can be dissipated by up to 1/10th when using amorphous iron.

Additionally, there are various electrical components, whose manufacturing with amorphous iron would help save energy when using a battery driven car.

Indian government over past half decade has achieved major milestone by electrifying its rural and urban areas. For instance, in 2019 government of India announced achieving 99.9% electrification thus showing strong will towards attaining sustainable development goal target. Moreover, India aims at becoming a global giant in supplying electricity 24x7 to households through efficient and clean process.

Conventional use of iron metals have resulted in huge loss of energy thus compelling transformer manufacturers to opt for much more energy efficient metals such as amorphous iron. This alloyed metal has considerable advantage over iron metals in terms energy savings thus seeing wide use case in the Indian market. Moreover, electricity cost in India is higher than other regions, hence efficient installations would mean higher payback.

Additionally, to utilize energy more efficiently and comply with regulations to dissipate the loss of energy, governments are encouraging use of high performance transformers while taking into account the environmental benefits. 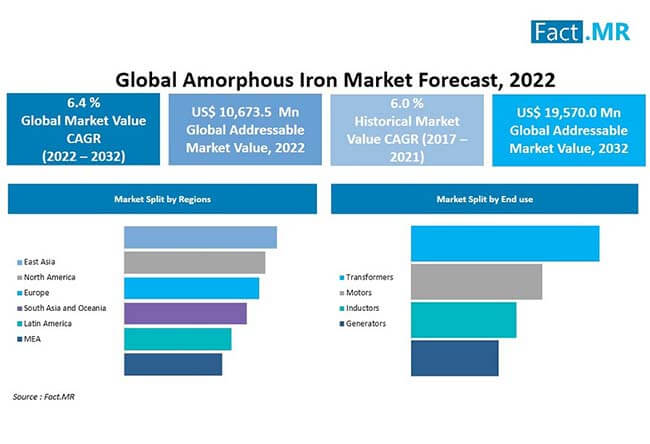 Which End-use in Projected to Find Major Consumption for Amorphous Iron?

Amorphous iron consumption for manufacturing of transformers is projected to account for prominent share in the market. This is mainly attributed to rapid urbanization which is leading to electrification at considerable rates. For instance, in the year 2000 around 43% of the Indian households were electrified which reached to 99.9% in 2020.

Moreover, replacement of conventional transformers with energy efficient ones are taking place which calls for use of high performance materials such as amorphous iron.

Additionally, governments are compelled to comply by UN sustainable development goals in keeping carbon emissions well below global benchmark. This will require use of energy efficient technologies and materials to take over the conventional ones.

Attributed to these above discussed factors consumption of amorphous iron in manufacturing of transformers will dominate the global market.

What is the Consumption Scenario of Amorphous Iron in Manufacturing of Motors?

Use of amorphous iron in manufacturing of motors accounted for second highest share after transformers. This is mainly attributed to amorphous iron’s lower flux density and low switching losses thus making them ideal for use in motors with higher frequencies.

Moreover, penetration of electric vehicle in automobile market will provide major thrust to the demand of amorphous iron as manufacturers are trying to find ways to reduce energy loss and increase driving efficiency.

Thus motors as an end use is projected to provide high incremental $ opportunity in amorphous iron market over next decade.

Metalglas, Hitachi Metals, Advanced Technology & Materials Co. Ltd are some of the major players in the amorphous iron market.

How much is the current worth of the amorphous iron market?

Amorphous iron consumption value is expected to grow at a CAGR of around 6.4% during the period 2022-2032.

How has been the performance of amorphous iron market over the past half-decade?

Key players can been mainly seen involved in development of new materials with which can lower the core loss thus emphasis is being given to research and development.

Who are the vital manufacturers of amorphous iron?

What outlook does the China provides for amorphous iron market?

China is estimated to hold around 44% of the global amorphous iron market.