The United States ductile iron pipes market is valued at US$ 1.21 billion and is estimated to climb to US$ 1.88 billion by the end of 2032, expanding at a CAGR of 4.4% during the forecast years of 2022-2032. The top 5 manufacturers of ductile iron pipes in the U.S. account for around two-thirds market share.

The market is likely to grow on the back of the development of sound underground infrastructure to provide basic amenities of water and gas to the population, along with preventing the damaging impacts of disasters such as earthquakes, tornadoes, etc.

Ductile iron is able to withstand the most severe operating conditions and environmental impact as it is formed by treating magnesium with molten low-sulphur base iron under closely controlled conditions. It can withstand extremely high and low temperatures without any effect on its brittleness as opposed to the alternative materials such as plastics that are heavily influenced by temperatures.

The historic CAGR registered for the U.S. Ductile iron pipes market was 2.9% during 2017-2021. The market is projected to expand at a higher CAGR of 4.4% during the assessment period (2022-2032, according to analysis by Fact.MR, a market research and competitive intelligence provider. 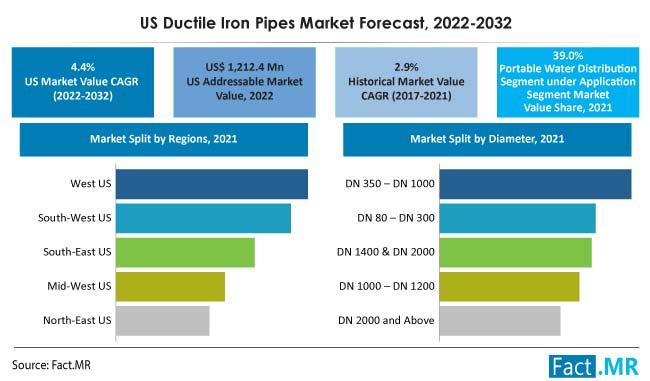 How is Infrastructure Development Driving Demand for Ductile Iron Pipes in the U.S.?

Regional governments are focusing on developing underground infrastructure that includes the supply of essential services such as water, oil, natural gas, etc. They are focusing on replacing old pipelines and installing new systems.

Use of pipes to transport oil & natural gas along with water is increasing at a fast pace. Ductile iron pipes can tolerate high pressure while transporting oil & gas, prevent water from mixing with chemicals from the external environment, and also maintain the pH level of water.

Earthquakes cause a vast amount of destruction to the water pipelines laid underground and other distribution systems, leading to substantial loss of precious necessary supplies. Therefore, the government of the United States is installing ductile iron pipes in key parts to safeguard critical water distribution lines against potential damaging impacts caused by environmental hazards.

Thus, all these factors are poised to provide the necessary uplift to the growth of ductile iron pipes market in the United States over the coming years.

What Issues Can Dent Demand Growth of Ductile Iron Pipes in the U.S.?

The cost of ductile iron pipes is high as compared to other piping solutions such as HDPE, PVC, etc. Overall cost of the installation of these pipes makes them costlier than other alternatives.

Use of these ductile iron pipes for underground applications makes them more prone to corrosion and leaks, and they also affect the quality of the soil, making it infertile. These corroded pipes can then leak fluid and suffer from failure. Thus, these factors are likely to hamper demand growth of ductile iron piping systems in the U.S. over the coming years.

Higher market is attributed to factors such as the greater number of disasters registered in these regions over the past years. Weather and climate disasters such as tornado outbreaks, tropical cyclones, etc., are witnessed in great numbers in these regions, which lead to the disruption of necessities of life such as water and gas supply.

These disasters have led to significant economic losses amounting to billions of dollars. Therefore, the application of ductile iron pipes can lead to the prevention of substantial economic losses.

For instance, earthquakes have caused damage to California's underground water pipelines and other distribution systems, thus marking the debut of ductile iron pipes in key parts of the cities to bear the impact, supporting regional market demand and growth.

Amongst them, DN350-DN 1000 ductile iron pipes account for 25.2% of the overall market share. The segment is likely to expand at 3.6% CAGR on the back of their extensive use for sewerage purposes.

DN 350–DN 1000 ductile iron pipes can withstand harsh operating conditions as they have a high alumina cement mortar lining and are highly alkaline to highly acidic. These pipes are being widely used to supply drinking water to the population and are also used in mining applications.

Under application, the United States ductile iron pipes market is segmented into potable water distribution, sewage and wastewater, irrigation, mining, and others.

Amongst them, portable water distribution holds 39% market share. The segment is projected to rise at 4.2% CAGR over the assessment period as there is major use of ductile iron pipes for water distribution and their deployment in wastewater treatment facilities, sewage outfall lines, and pump stations.

Application of ductile iron pipes in irrigation accounts for 27.8% market share. The segment is projected to rise at 4.3% CAGR over the forecast years.

Prominent players in the United States ductile iron pipes market are focusing on innovations on the technical front and developing pipe products of superior quality. They are focusing on launching pipes that perform effectively against ground displacement caused by disasters such as hurricanes, landslides, etc.

Fact.MR has provided detailed information about the price points of key manufacturers of ductile iron pipes positioned across regions in the U.S., sales growth, production capacity, and speculative technological expansion, in the recently published report.

What is the sales value of ductile iron pipes in the U.S.?

How did the market fare over the past few years?

Which ductile iron pipes manufacturers are prominent in the U.S.?

Which region leads the ductile iron pipes market in the U.S.?

Which application of ductile iron pipes accounts for most revenue?

Portable water distribution accounts for 39% share in the application of ductile iron pipes in the United States.

Seamless steel pipes market is valued at US$ 61.6 billion in 2022. East Asia tops global market with...