Sales of hydrogen sensors accounted for around 1% share of the global sensors market at the end of 2021.

To find hydrogen leaks, hydrogen sensors are built into hydrogen detectors and monitoring systems. As hydrogen is flammable and toxic it has the necessity for routine monitoring. For instance, in volatile reactions like the manufacturing of fertilizer, regular monitoring of the flow of hydrogen is required.

Hydrogen sensors are used extensively in a wide range of end-use industries, including the automotive industry. This is because hydrogen is considered a feasible alternative fuel that could affect the economics of the fuel industry. As the automotive industry is looking forward to shifting toward electric vehicles (E-V), there is an increase in the production of fuel cell electric vehicles (FCEVs). All these factors are surging the demand for hydrogen sensors.

The incorporation of IIoT and the data generated by sensors to connect the crucial assets of enterprises is still at an early stage in the market for hydrogen sensors. Deployment of digital technologies with advanced analytics has shown an immense untapped potential to improve safety at work and reduce the risk to employees.

With technologies such as smart and low concentration HS, the market is set to grow exponentially in the future.

Over the 2017-2021 period, the global market for hydrogen sensors registered a CAGR of 1.5%. Fact.MR, a market research and competitive intelligence provider, predicts that the market will exhibit growth at 6.7% CAGR between 2022 and 2032. 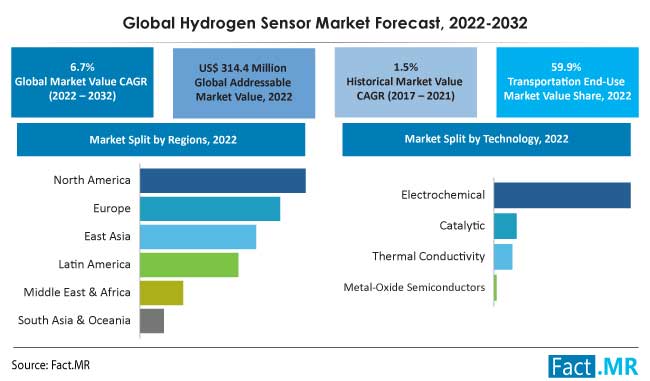 Market share analysis of hydrogen sensors based on technology and. Under the technology segment, the electro-chemical sub-segment enjoys 76.2% market share.

Why is Demand for Hydrogen Sensors Expected to Rise Rapidly?

“Hydrogen as an Alternative Fuel to Boost Product Sales”

Hydrogen is utilized in several industries, and the amplified usage of hydrogen in fuel cell-based applications is creating a resounding effect on the development of the hydrogen sensor market. Hydrogen is readily available in nature and owing to it releasing only water as its by-products after the chemical reaction with oxygen to generate electrical energy, is one of the prime contributors to the growth of hydrogen being seen as an alternate fuel.

Further, hydrogen is stored in containers in such vehicles which run on hydrogen fuel cells. Thereby, stored hydrogen needs to be monitored to check for any leaks which may occur during normal operations, and owing to it being combustible and simple to ignite, needs to be continuously monitored to improve the overall safety of the passengers as well as the vehicle. Here, the hydrogen comes to the rescue, which monitors the hydrogen leakages and keeps them under check.

Owing to this reason, the hydrogen sensors market will experience positive growth over the forecast period.

Among the various industries, the oil and gas industry is one of the largest and generates a global revenue of around US$ 5 trillion annually. Hydrogen is an important part of many refining processes of energy production. It decreases the amount of sulphur in fuels. It reduces heavy gas and oils to low molecular weights. In catalytic reforming, hydrogen can also be used to treat gas.

However, a refinery hydrogen leak can quickly become a huge catastrophe. Also in small quantities, hydrogen exposure presents a variety of different hazards. Asphyxiation often happens when the concentration is high enough to strip away oxygen from people in the vicinity.

Hydrogen sensors are used to detect leakage and prevent any avoidable accidents and trigger emergency responses, if necessary. Therefore, the increasing oil and gas industry boosts the hydrogen sensor and detector market.

What Roadblock Need to Be Overcome by Hydrogen Sensor Manufacturers?

In the semiconductor ecosystem, suppliers in almost all sectors are raising prices to reflect tight capacity amid high demand. However, concerns have been raised that the upward market trend could push end-device prices up, deterring customers.

Raw materials such as semiconductor oxides are used for fabricating gas sensors, this in turn affects the prices of the hydrogen sensor. Further, the US banned trades with the China-based SMIC (Semiconductor Manufacturing International Corporation) has limited the capacity of the pure-play foundry to acquire semiconductor devices for its advances in process technology.

Nevertheless, inadequate supplies of chemical raw materials and some critical consumables for use in sensor manufacture are a more important problem facing SMIC. These factors are supposed to inhibit market growth during the long-run forecast period.

Why is the Germany Hydrogen Sensor Market Set to Be Lucrative?

As Europe strives to become the industry leader in clean hydrogen, the European Clean Hydrogen Alliance was established to facilitate investment and large-scale operation of clean projects of hydrogen. Germany is home to some of the largest car manufacturers such as BMW Group, Daimler AG, and Volkswagen Group, and therefore has a high potential for hydrogen sensors.

Additionally, the federal government's in Germany launched National Hydrogen Strategy on 10th June 2020, which seeks to develop a competitive market for hydrogen and take responsibility for establishing it as an alternative energy carrier around the world.

Furthermore, the country has a vision of developing a domestic market for hydrogen infrastructure, not only to power the industry, but also to establish a hydrogen market and international cooperation. Initiatives like this pave the way for the growing demand for hydrogen sensors in the country.

Owing to all these factors, there is a lucrative market opportunity in the country. The market in Germany is anticipated to expand at 7.2% CAGR from 2022 to 2032.

Will Increasing Hydrogen Production in the U.S. Aid Market Expansion?

The United States continues to be a major contributor to the growth of the hydrogen sensor market, producing approximately 10 million metric tons of hydrogen each year. Additionally, the US government has established her H2@Scale program.

A positive attitude of the government, along with the desire of major automakers to use hydrogen as fuel, will give impetus to the growth. Owing to these positive growth factors, the U.S market is set to capture 88.7% market share of North America by 2032.

What is the Scenario for Electro-chemical-based Hydrogen Sensors?

Electro-chemical sensors work on the electro-chemical process. It gives an idea of the composition of the gas. These types of sensors can be designed specifically for a particular gas. Electro-chemical sensors are batteries in which gas is the active component of the overall battery response. Its improved operational flexibility makes it the top choice for OEMs and gas detector manufacturers for integration into production units.

Considering all the types of technology-based hydrogen sensors, electro-chemical sensors captured a market share of 76.1% in the hydrogen sensors market landscape in 2021.

How Will the Automotive Industry Lead the Sales of Hydrogen Sensors?

The automotive industry is a major contributor to the increasing demand for hydrogen sensors. This is because many automakers see hydrogen fuel as the power source for fuel cell vehicles.

Local governments are driving hydrogen demand by providing fundamental drivers such as B. Government Procurement of Fuel Cell Electric Vehicles. This will have a major domino effect in the automotive sector and act as an overall impetus for increasing hydrogen sensor requirements.

FCEVs are more efficient than conventional internal combustion engine vehicles, producing only water vapor as an exhaust. Also, hydrogen infrastructure and FCEVs required to keep them it the infancy stage is on the rise, and as countries look to use green energy, there is a growing need to implement this technology on a large scale.

Besides, many manufacturers have laid down their E-Vison plans, where they intend to test newer technologies and implement them in hydrogen-enabled vehicles and establish global standards of clean mobility in the process.

Key market players are developing automated and smart hydrogen sensors. Companies are looking at integrated sales channels to lessen the number of stakeholders in the supply chain and thereby generate higher profit margins.

Sales of hydrogen sensors are anticipated to reach US$ 599 million by 2032.

*209 figures and 71 tables includes by FactMR