Global epistaxis market is holding nearly 1% market share in global ear nose and throat (ENT) treatment market which is likely to grow at a CAGR of 6% during the forecast years.

All along 2017-2021, the historic year's global epistaxis market experienced slow-moving growth of 3.5% CAGR. Customers with the increasing needs and increased expenditure by the governments in the advancement of technologies have boomed the epistaxis market during the covid-19 pandemic.

The demand of epistaxis can be assessed throughout the long-term forecast period by bifurcating the forecast timeline into three sections.

1. Short-term: retrieval growth is projected during the upcoming Triennials.

2. Medium-term: the demand normalization is projected to grow during mid-term.

The demand of epistaxis is likely to grow at a constant rate during the valuation period with a CAGR of 5.5%. Creating a constructive circumstances for market players, with the focus on the inclusion of health safety features in the epistaxis.

Extreme weathers during different seasons like, dry and cold weather during winters or intensively hot temperatures during summer can cause epistaxis or nasal bleeding among children as well as adults. Excessive heat and dryness in the air can dry out the nasal membranes, and it removes the quantity of moisture essential to be maintained in the nose normally.

In addition, epistaxis is one of the most common health problems observed among children, adults, and the elderly to be occurred in severe summers or extremely cold winters, as the less humid weather dries out the nasal membrane causing it to bleed abnormally. An increase in such nosebleed occurrences during extreme dry, hot, cold, or less humid weather across the globe is generating needs for various epistaxis treatment products to treat abnormal nosebleed problems.

As epistaxis is associated with blood disorders, hypertension becomes one of the systematic factors that trigger spontaneous bleeding in the mucous membrane in the nose. According to the facts declared by the World Health Organization (WHO), more than 12% of the deaths caused in the world were caused due to hypertension, which makes hypertension one of the leading causes of death.

Although various advancements in epistaxis treatments are resulting in greater success rates in curing epistaxis completely, there are some side effects of these treatments which can worsen the problem of epistaxis in the patient.

Further, various epistaxis treatment procedures such as nasal cauterization, nasal packing, etc., have rare but existing side effects, which hinder the growth of the global epistaxis market as patients might choose to go for equivalent alternatives to these epistaxis treatment procedures. Some patients might get allergic reactions to antibiotic ointments that are supposed to stop nasal bleeding by moisturizing the membrane.

If the epistaxis treatment procedures happen to fail at any level, the nasal bleeding can recur eliminating the complete effect of the procedure. In treatments like nasal packing, excessive bleeding can be caused in different areas of the body of the patient due to traumatic insertion of nasal packs. Side effects of nasal cauterization can be caused due to an overdose of acid used for closing the blood vessels, which can create a hole in the nose.

Moreover, anesthetics used in epistaxis treatments carry the risk of causing complications in the treatment resulting in damaging the health of the patient and death in rare cases. Such side effects of epistaxis products and treatment procedures are restricting the growth of the global epistaxis market.

Why the United States has Enormous Market for Epistaxis?

Further, advanced research conducted in the medical field and inventions of new drugs and treatments to treat various health-related issues effectively lead to the growing demands for innovative products for epistaxis treatment in the United States.

Moreover, the lifestyles changes of the consumers in the US, like smoking trends, air pollution etc., create an auspicious atmosphere for consumers to be susceptible to the primary causes of epistaxis.

Further, with the increasing demand for epistaxis treatment products, owing to the increasing occurrence of health problems like a common cold, and strict regulatory laws for developing and distributing a new drug in the markets, the North American epistaxis market is likely to maintain a sound growth throughout the forecast period.

Why is Chinese Epistaxis market making huge market for epistaxis?

Amongst the six geographical regions in the global epistaxis market, the East Asian epistaxis market is projected to witness rapid growth to be the most lucrative market for the pharmaceutical industries in the world.

China's epistaxis market is estimated to cross the valuation of USD 61 million during 2022 & 2032. The demand for epistaxis are expected to grow by 1.6X times throughout the forecast period. 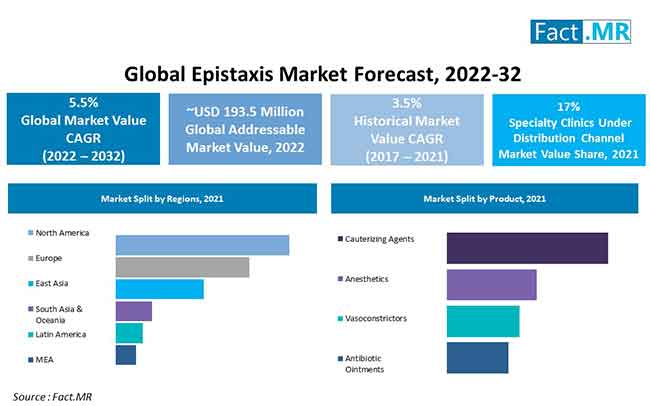 Which product type has highest in demand in the Epistaxis Market?

Epistaxis’ foremost symptom is bleeding which confirms the epistaxis’ presence. However, cauterizing agents coagulate cellular proteins, which can, in turn, decrease the bleeding and help in handling the over bleeding. Owing to this, it is widely used by medical professionals.

However, cauterizing agents segment is the largest product type in the global market, which is holding more than 2/5th of market shares of the global epistaxis market. It’s projected to offer an absolute dollar opportunity of nearly USD 58 million with a growth of 4.2% CAGR.

Which Distribution Channel is Poised to Show Lucrative Growth in Epistaxis Market?

To recover diffusion across profitable markets, the aforementioned players use various organic and inorganic strategies. Product launches, alliances and agreements with key epistaxis suppliers, acquisitions, and geographical expansion are all part of these strategies.

The global value of epistaxis market is estimated to be worth over USD 193.5 Million in 2022.

*94 figures and 56 tables includes by FactMR