The world has witnessed a significant increase in the number of cases of rare diseases, which has fueled the demand for cell and gene therapy. Ex-vivo gene therapy is becoming more popular for neurological treatments, which is expected to drive gene therapy market growth through 2032.

Over the last few years, the world has seen a significant increase in focus on health care, which has resulted in a massive increase in research and development activities. The rising prevalence of rare diseases has also increased the demand for novel treatments, which has driven gene therapy market potential in the past. A CAGR of 18.7% was recorded for the market from 2015 to 2021.

The presence of companies offering exclusive lentivector platforms is hastening revenue growth in this segment. Oxford Biomedica Plc, for example, has an exclusive lentivector platform, an advanced and safe gene delivery system capable of carrying payloads of up to 9kb and capable of permanent modification of dividing and nondividing cells while requiring no pre-existing immunity.

Research and development (R&D) activities are also expected to have a significant impact on the market. Several companies are aiming to build a gene therapy platform with a strategy centered on establishing a transformational portfolio through in-house capabilities and enhancing those capabilities through strategic collaborations, R&D expansion, and potential licensing, merger, and acquisition activities.

For example, the Cystic Fibrosis Foundation announced an investment in SalioGen Therapeutics in January 2022 to support the company's preclinical research into novel gene therapy for cystic fibrosis. SalioGen's Gene Coding approach is intended to activate, deactivate, or modify the function of any gene in the genome.

Gene therapies are expensive medical procedures that necessitate significant capital investment on the part of both the provider and the patient, which limits the global gene therapy market's growth.

Gene modifications necessitate precision equipment, which significantly raises the cost of cell and gene therapy and limits the global adoption of these therapies. Due to high costs and low adoption, viral vector gene therapies are expected to grow at the slowest rate. 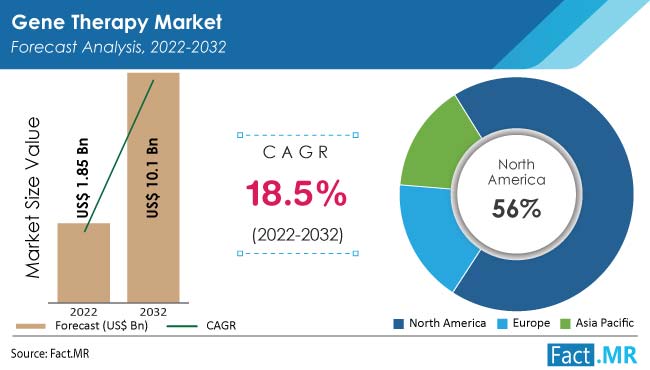 What is the Growth Outlook for Gene Therapy in North America?

With a revenue share of more than 56% in 2022, the North American regional market will lead the industry and will grow at the fastest CAGR over the forecast years. Several government agencies are investing in the region because of a strong regulatory framework for promoting the development of cellular therapy and the presence of a large number of biopharma companies. This, in turn, is propelling the regional market forward. The presence of centers and institutes engaged in gene therapy research and development is expected to drive the market in North America.

Also, the rising prevalence of chronic diseases, rising healthcare expenditure, the presence of advanced healthcare infrastructure, and the availability of reimbursements are also major factors driving the market growth. The approval of Zolgensma in 2019 has, on the other hand, greatly favored the US market. Despite the price controversies, the product is expected to have profitable revenue growth in the forecast period.

The Asia-Pacific (APAC) gene therapy market was valued at US$ 351 Million in 2021, with a CAGR of 18.3%. This is accomplished through the optimization of vectors such as retroviruses and lentiviruses, the introduction of new techniques such as induced pluripotent stem cells in conjunction with current gene editing models, and even trials in germ cells.

The focus on healthcare in India has increased, and this trend is expected to drive gene therapy demand over the forecast period. The country is also seeing an increase in cancer cases, which is encouraging the use of gene therapy in oncology treatments. The key players in the APAC gene therapy market include Novartis AG, Sibiono GeneTech Co. Ltd., Shanghai Sunway Biotech Co. Ltd., Kolon Life Science Inc., AnGes Inc., and Amgen Inc.

During the period 2022-2032, the European gene therapy market is expected to grow at a CAGR of more than 19%. The European market is the best for manufacturing cell and gene therapy products. Europe is home to more than 238 regenerative medicine companies. Europe is home to nearly a quarter of the world's regenerative medicine therapeutic developers.

In 2020, the oncology segment accounted for 31% of the European cell and gene therapy market. Currently, over 61 companies in Europe are specializing in cell therapy and introducing cell therapy products. Some key players in the Europe market are Novartis, Spark Therapeutics, Amgen, Gilead Sciences and Organogenesis.

The cancer segment is expected to account for a sizable portion of the market. The increasing burden of cancer disorder, the growing emphasis on research to develop an effective cancer treatment, and rising cancer research investments are all factors driving the segment growth.

The global gene therapy market is fiercely competitive, with only a few major players. Companies like Amgen Inc., Bluebird Bio, Gilead Sciences, Inc., Novartis AG, Orchard Therapeutics, Sibiono GeneTech Co. Ltd., Spark Therapeutics (Roche AG), and UniQure N.V.,  have a sizable market share in the Gene Therapy market. To secure a position in the global market, various strategic alliances such as collaborations, acquisitions, and the launch of advanced products have been formed.

According to Fact.MR, the gene therapy market was valued at US$ 1.55 Billion in 2021

As per Fact.MR, North America will likely yield 56% of global gene therapy market revenue in 2022

In Europe, the gene therapy market is expected to document a CAGR exceeding 19% until 2032