The global plasmapheresis market is likely to be influenced by a range of macroeconomic and microeconomic factors. Growth in global healthcare spending, especially increasing emphasis on advanced healthcare treatment in the Asia Pacific and the Middle East, is likely to create growth opportunities for market players.

In addition to these factors, increasing awareness of the treatment options available for treating immune system disorders, most notably myasthenia gravis, Guillain-Barre syndrome, Lyell's syndrome, systemic lupus erythematosus, and thrombotic thrombocytopenic purpura are likely to fuel the growth of the market.

Advancement in plasmapheresis, combined with growing avenues of treatment such as veterinary healthcare are likely to shape the future direction of the market during the forecast period.

However, as per the Fact.MR’s recently published report, the global plasmapheresis industry is likely to gain nearly 79 BPS by over the 2022 & 2032. It accounts for almost 35.9% market share in the global autoimmune disease diagnosis market which is projected to experience 21.1% CAGR growth during the forecast years.

The continuous increase in population, pollution, flu etc. has boosted autoimmune diseases among people. Due to this, the demand for various types of autoimmune disease treatments has been increased in double digits which has led to the plasmapheresis demand.

The demand for plasmapheresis increased by 4.6% CAGR and the market value reached at USD 1.2 billion by the end of 2021. Global plasmapheresis market has generated nearly USD 239 million in last half-decade.

Moreover, it is likely to provide an absolute $ opportunity of more than USD 1.3 billion. The global market is dominated by the North American plasmapheresis market which has offered an absolute dollar opportunity of around USD 80 million in the previous half-decade.

Increase in the Prevalence of Autoimmune Diseases fueling Adoption:

Increasing prevalence of thrombotic thrombocytopenic purpura, Guillain-Barre syndrome, Myasthenia gravis, and diffuse alveolar hemorrhage due to Goodpasture syndrome, hyper viscosity syndrome, chronic inflammatory demyelinating polyneuropathy, and other autoimmune diseases is likely to provide an impetus to the growth of the plasmapheresis equipment market during the assessment period.

Moreover, increasing emphasis on boosting healthcare infrastructure, combined with higher degree of awareness among end-users is likely to promote the growth of the market during the assessment period.

An increase in healthcare spending in many regions has given a boost to the adoption of plasmapheresis treatment across various end-use industries. Countries in the Asia Pacific and the Middle East and Africa (MEA) are revamping their healthcare infrastructure, which is likely to give a boost to the demand for advanced treatment procedures. These factors are likely to provide an impetus to the growth of the plasmapheresis market during the assessment period.

Increasing adoption of plasmapheresis treatment in veterinary healthcare is likely to create an impetus to the demand for plasmapheresis instruments and disposables during the assessment period. The application of plasmapheresis in treating muscle weakness disorder myasthenia gravis is effective and has paved the way for future use of this treatment option in veterinary healthcare. The treatment has the potential to be used in a range of immune system disorders, and it can be an option when traditional drug therapy is not effective.

Concerns about Side Effects Continue to be a Challenge

The concerns about side effects continue to be a challenge for plasmapheresis market, with a fall in arterial blood pressure, arrhythmias, and temporarily elevated temperature and paresthesia’s being the common side effects.

What is the Growth Scenario of India Plasmapheresis Markets?

Decades of economic development in South Asia & Oceania has meant that many countries in the region are now in a position to pay more emphasis on their healthcare sector. Expansion of the healthcare sector in the region is likely to boost demand for medical devices, which in turn will augur well for the growth of the plasmapheresis equipment market.

The demand for plasmapheresis is unceasingly growing from countries such as India, Australia, Nepal, etc. due to the rising autoimmune diseases. The plasmapheresis equipment market in Indian Market will also be influenced by the increasing middle class and growth in the percentage of the geriatric population.

Although the region presents a host of opportunities, market players have faced challenges in terms of heterogeneity in consumer demographics and complex regulatory procedures.

What are the Growth Prospect of Chinese Plasmapheresis Market?

East Asian countries such as Japan, China, are some of the leading consumers of plasmapheresis due to which they are holding more than 1/5th of market share in the regional market. The regular advancements in technologies and reduction in costs are likely to boost the Chinese plasmapheresis market which will support to overall plasmapheresis market during 2022 &2032. 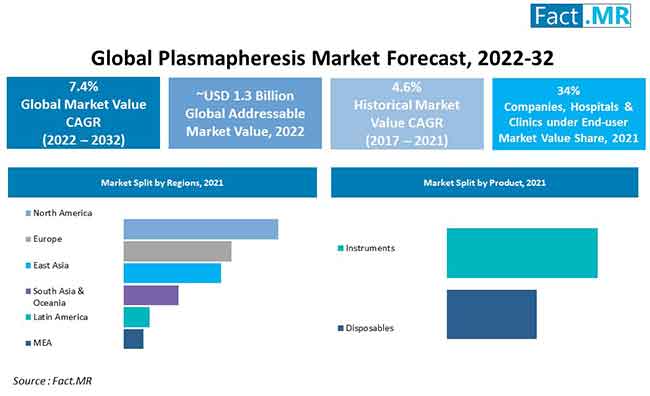 Which product type is projected to be the extensive contributor over the valuation period in Plasmapheresis Market?

According to the Centers for Disease Control and Prevention (CDCP)’s recently published data, nearly 37.3 million US population, around 1 in 10 American, is suffering from diabetes. Additionally, nearly 96 million American adults have prediabetes, around 1 in 3 Americans. Plasmapheresis is used to treat numerous types of sickle cell diseases and neurotherapy. In these and other treatments, the majority of doctors prefer Instruments to achieve the highest success rate.

However, the instruments sub-segment of plasmapheresis product type is acquiring the largest market share. It is projected to continue its dominance in the assessment period with a CAGR of 5.4% and offers an absolute dollar opportunity of USD 826.2 million by the end of 2032.

The plasma filtering from whole blood can be accomplished via the use of semipermeable membranes or centrifugation. The centrifugation technology takes advantage of the different specific gravities intrinsic to various blood products, such as white blood cells (WBCs), red blood cells (RBCs) platelets, and plasma.

However, the instruments sub-segment of plasmapheresis technology accounts for nearly 2/3rd of the global market value share in the plasmapheresis market. It is anticipated to offer an absolute dollar opportunity of nearly ~USD 914 million by the end of the forecast period.

Prominent players in the global plasmapheresis market are largely focusing on R&D by coming up with innovative ideas to foster the growth of products and services in the coming ten years. Companies have adopted numerous strategies such as mergers & acquisitions, partnerships etc. to have dominance in the market.

What is the global Plasmapheresis Market scenario?

The global value of plasmapheresis market is estimated to be worth over USD 1.3 Billion in 2022.

The demand is anticipated to surpass USD 2.6 Billion by 2032 end.

What was the last 5-year CAGR for the demand in the Plasmapheresis Market?

Who are the prominent players in the global Plasmapheresis Market?

Which is the most leading region in the Plasmapheresis Market?

U.S. Population Health Management (PHM) Solutions Market is expected to reach a valuation of US$ 34....

Single Dose Radiotherapy Market is expected to be driven by rising prevalence of breast cancer. Dema...