Powerful lighting, as well as electrical systems for heavy equipment, are in high demand. As a result, heavy equipment lamps market accounted for ~30% of overall lamp market in 2021. Moreover, manufacturers invested considerable time for designing bulbs that can be put on heavy machinery and can resist a variety of situations.

Heavy equipment lamps accounts for longer life span and lower energy usage compared to that of halogen bulbs. In addition, their ability of being used in various areas such as shops, construction sites, arenas, warehouses, etc. makes them a unique industrial equipment. Considering the aforementioned facts, HEL (Heavy Equipment Lamps) are also likely to witness growth in the near future.

LED technology is raising the efficiency of heavy machinery, since the light produced by LED lamps is less glaring, cleaner, and saves about 40% of the power consumption. LEDs have a lot of environment friendly advantages, including the ability to save electricity. LEDs are also popular among heavy equipment due to their ease of installation.

To perform safely, an increasing number of organizations are utilizing LED lighting for heavy equipment, particularly during night-time operations. LEDs can also function at a wide range of voltages, making them appropriate for heavy machinery. Moreover, instead of permanent lighting fixtures, portable LED towers are being used as it can be easily installed.

Signal lamps are dominating the market account for 32% of market share in 2032 due to increasing air traffic resulting high demand for aviation light signals in air traffic control towers which is used as back up in case of failure of aircraft radio.

Mechanization of earth moving equipment to offer high growth opportunity in rural and urban areas. Thus increasing the demand for excavators and small backhoe loaders to carry out the operation of digging and leveling. To support this mechanization govern has introduced various scheme to increase the sales of heavy equipment. This is reinforcing the heavy equipment lamps market growth.

Which Country is likely to drive the Growth of East-Asia Heavy Equipment Lamps Market?

In East Asia, China holds the prominent market share in East-Asia heavy equipment lamp market accounting for approximately 50% of market share. China is anticipated to reach the market value of USD 1.6 Billion by the end of 2032. The country has seen the rapid development of its lighting industry in past decade due to surge in infrastructural projects which include highways, railroads etc.  The increasing use of heavy equipment lamps for the purpose of residential and industrial construction is contributing in East-Asia heavy equipment market growth.

What are the Key Factors impacting US Heavy Equipment Lamps Market?

The higher spending on research and development in U.S for offering emission less lighting units to follow the guidelines by government and increase in number of accidents during night on construction site is propelling the need for heavy equipment lamps in the country. U.S accounts for more than 60% of North American market share. U.S is anticipated to reach the market value of USD 1.5 Billion by the end of 2032 with a CAGR of 3.6% over the forecast period. 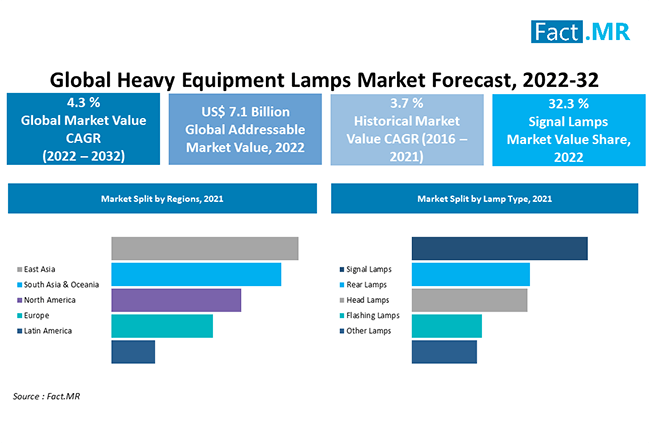 How Signal Lamps to Gain Maximum Traction in the Global Market for Heavy Equipment Lamps?

These bulbs are used in optical communication for visual signaling. On construction sites, such as during roadwork, signal lighting are commonly utilized. Marine and air traffic control can also benefit from these lights.

HID (High Intensity Discharge) lamps account for the one third of the revenue share under lighting types. HID lamps are also estimated to create an absolute dollar opportunity of over USD 1.7 Billion between 2022 and 2032.

HID bulbs utilize low energy which result in longer life span of the bulb which may escalate the demand for HID bulbs over halogen bulbs. HID laps can be utilized in large indoor as well outdoor areas which include warehouses, shops, construction sites, arenas etc.

However the increasing penetration of LED light in different end use industries is expected to witness higher growth rate in the near future.

The key players are involved in organic and inorganic growth strategy which set to attract large number of customer towards the market. The market players are continuously involved in merger, acquisition and partnership with the new entrance to adapt new ideas for enhancing their product range.

What is the market value of heavy equipment lamps in 2022?

The global heavy equipment lamps is estimated to be valued more than USD 7.1 Billion in 2022.

What is the heavy equipment lamps forecast?

What was the last 5 year’s market CAGR?

What is driving demand for heavy equipment lamps?

The rising infrastructural developments and growing construction industry is one of the primary factor driving the demand for heavy equipment lamps.

Industrial Wood Chipper Market to register an above average growth during the years, 2021-2031. New ...

Temporary Power Market is expected to grow at over 5% in 2021. Demand for diesel generators to fuel ...