The present-day valuation of the global cryogenic equipment market is US$ 13.6 billion and is envisioned to surge to US$ 26.5 billion by the end of 2032. Sales of cryogenic equipment are speculated to increase at a noteworthy 6.9% CAGR over the next ten years.

Increasing investments in the space industry and a rising number of space missions are also expected to boost demand for cryogenic devices in the future. Cryogenic systems are used to store space specimens as cryogenic gases are inert in nature and do not react with the specimen keeping its characteristics intact.

Increasing demand for portable cryogenic tanks and liquid nitrogen storage containers is expected to promote the growth of the cryogenic storage tanks market in the coming years.

On the contrary, risks of cryogen leakage are anticipated to prove to be a major challenge for cryogenic equipment suppliers as prolonged exposure to cryogen may lead to frostbite and oxygen deficiency resulting in fatal damage to the lungs and other parts of the body.

The high CAPEX (Capital Expenditure) and OPEX (Operating Expenses) costs are predicted to obstruct the growth of the cryogenic equipment market across the forecast period. Maintenance costs of cryogenic systems are also very high and this could also potentially constrain market evolution over the coming years.

The market for cryogenic equipment in the Asia Pacific region is anticipated to be the most rewarding one in the world across the forecast period, which can be ascribed to the growing demand for gas-powered energy generation plants and the rising demand for clean energy.

Supportive government initiatives and robust economic growth in countries such as India, China, Japan, and South Korea are also expected to boost demand for cryogenic equipment through 2032.

This latest cryogenic equipment industry survey by skilled analysts at Fact.MR, a market research and competitive intelligence provider, lists all the key factors promoting and inhibiting market potential across the globe, with a detailed regional and segmental analysis as well.

The high energy costs required to run and maintain a cryogenic system increase the overall capital expenditure and operating costs and have a hampering effect on the overall market growth. As per the US Department of Interior (DOI), the initial CAPEX costs associated with the setup of a cryogenic infrastructure plant is around US$ 300 million, which is quite high for new companies and startups and thus, acts as a restraining factor for the market development.

What are the Opportunities for Cryogenic Equipment Start-ups in the Industry?

“New Entrants Can Focus on Product Innovation to Make a Mark”

Upcoming market players are focusing on creating innovative and novel cryogenic systems and cryogenic devices to disrupt the market and advance their business potential.

Here are some start-ups that could change and revolutionize the global cryogenic equipment market in the near future. 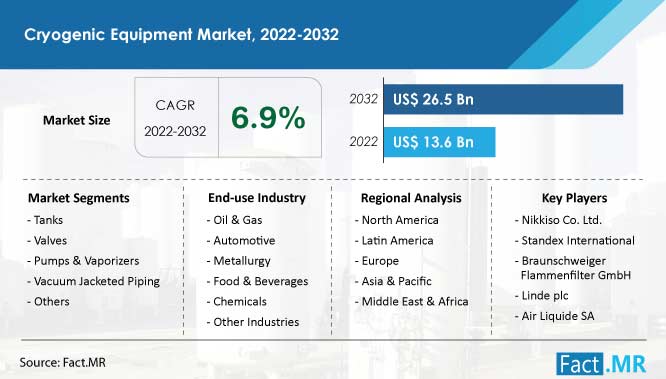 Will the United States Be an Opportune Market for Cryogenic Equipment Manufacturers?

Demand for energy is witnessing a substantial increase across the world and this trend is prominent in the United States as well. Moreover, the rising focus on sustainability has bolstered the demand for clean energy sources, which in turn is expected to drive up the demand for LNG (Liquefied Natural Gas) and subsequently boost demand for cryogenic equipment and services in the future.

Supportive government initiatives and the presence of key cryogenic equipment manufacturers are other factors that could promulgate sales of cryogenic devices in the country through 2032. Currently, the market for cryogenic equipment in the United States accounts for more than 20% share of the global industry landscape.

Japan is known as one of the most technologically advanced nations in the world and this is what makes it a highly attractive market for all types of technologies. The nation is leading research in the quantum technology field and thus has a wide scope of application for cryogenic devices and services as cryostats play a crucial role in the functioning of quantum technologies.

The country is also the largest importer of liquefied natural gas (LNG) in the Asia Pacific region and this is also anticipated to boost cryogenic equipment sales over the next ten years. Moreover, the presence of key chemical manufacturers in Japan is also expected to drive market potential in the future. Demand for cryogenic equipment in Japan is estimated to rise at a steady 5% CAGR through 2032.

Which European Countries Could be Lucrative Markets for Cryogenic Equipment Suppliers?

“Germany & United Kingdom to be Rewarding Markets in Europe”

In 2020, Germany led natural gas imports in the European region and was responsible for around 102 billion cubic meters of natural gas imports, followed by Italy and the U.K. as per the data provided by Statista. This trend is expected to be followed in a similar capacity over the coming years as well and this is anticipated to promulgate cryogenic system sales in Europe.

The increasing use of gases in several industrial applications and growing demand for clean energy are other factors that are expected to favor the growth of the cryogenic equipment market in European countries going forward.

Which Industry Provides the Most Rewarding Returns?

Based on end-use industry, the market for cryogenic equipment is segmented into oil & gas, metallurgy, automotive, food & beverages, chemicals, and other industries

The oil and gas industry is anticipated to exhibit the most attractive business opportunities owing to the high use of cryogenic systems for various applications such as liquefaction, regasification, LNG transportation, etc. Increasing use of cryogenic gases such as argon and nitrogen in the petrochemical industry is also expected to boost cryogenic equipment sales in the long run.

Prime companies in the cryogenic equipment market are launching new innovative solutions to enhance their market presence and boost their sales potential.

Worldwide sales of cryogenic equipment have reached US$ 13.6 billion in 2022.

By 2032, the market for cryogenic equipment is estimated to be valued at US$ 26.5 billion.

Demand for cryogenic equipment is forecasted to rise at 6.9% CAGR through 2032.

Increasing investments in the space industry, rising demand for LNG, and growing demand for energy and power are prime drivers for the market.