With uncontrolled population growth, physical spaces have become more confined, and carrying out the digging operations is becoming difficult.

Compact excavators have emerged as a key automotive vehicle that can help in excavation of soil and other earthen materials in cramped up spaces.

With the trend of miniaturization influencing the global automotive sector, companies are actively partaking in the production of compact excavators.

While the conventional excavators have been struggling to reach the narrowed spots between buildings and tight spaces, compact excavators are being predominantly used in such digging purposes. 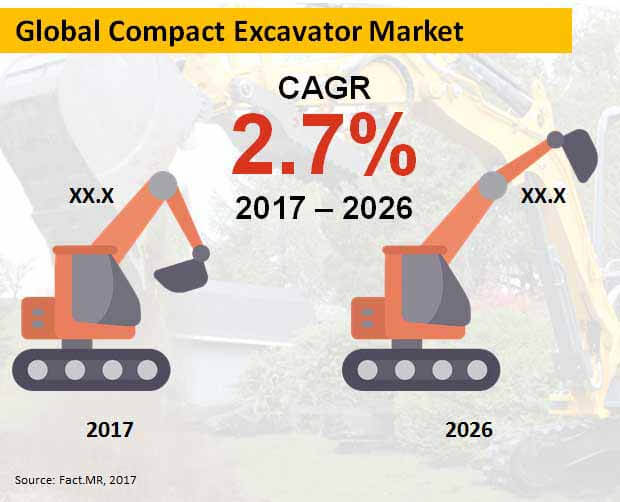 Manufacturers of compact excavators are witnessing a considerable rise in demand from individuals as well as local construction companies. New compact excavators entering the market are being designed to meet the earth-moving requirements of the future.

The comfort of operating compact excavators is further driving the working professionals in the construction industry towards them.

Moreover, the function of changing the attachments on the compact excavators is enabling the process of high-level excavations.

According to a recently published report by Fact.MR, the global market for compact excavators is likely to expand at a 2.7% CAGR in terms of volume during the forecast period, 2017-2026.

The demand for compact excavators in mining sector is also expected to gain traction towards the latter half of the forecast period.

Demand for Electric Compact Excavators to Gain Traction by 2026-end

The report has also projected that tail swing compact excavators will be a top-selling product in the global market throughout the forecast period.

On the other hand, zero tail swing compact excavators are expected to register a relatively high CAGR of 2.8% in terms of volume.

XCMG are observed as the leading manufacturers of compact excavators in the global market. Over the forecast period, most of these players are expected to expand their businesses on the back of product development by integrating advanced excavation technologies and equipment in the vehicles.

*96 figures and 118 tables includes by FactMR