The excavator market will grow by 3.2 percent y-o-y in 2019 compared to 2018. Excavator demand will improve as the heavy construction equipment market recovers from a catastrophic depression.

The Fact.MR report provides in-depth information about recent developments in the excavator market.

The report features a comprehensive list of leading stakeholders as well as new entrants in the excavators market, which includes

According to the Fact.MR report, Caterpillar Inc., KUBOTA Corporation, and Doosan Bobcat Inc. are the Tier 1 manufacturers in the excavator market and they collectively account for around 30% revenue share.

Due to the slowdown in the excavator market, a majority of manufacturers are focusing on introducing innovative performance features of excavators to boost sales.

Leading vendors are investing in technology and R&D to capture lucrative sales opportunities in developed countries.

Meanwhile emerging players in the excavator market are expanding their businesses in developed countries, where customers are more focused on enhanced efficiency than new designs of engines in excavators.

Some of the examples include

A majority of excavators used in various industrial sectors use diesel as fuel. In order to limit the air pollution caused due to heavy equipment with ignition engines, such as excavators, various governing bodies have incorporated stringent emission regulations, which all the players in the excavator market need to conform to. 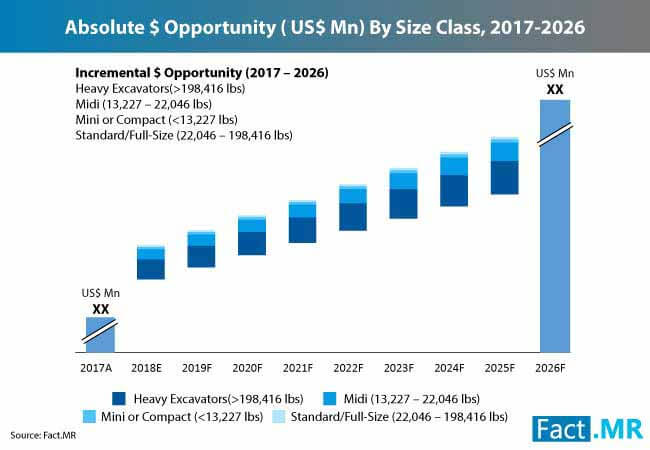 In addition, non-road mobile machinery emission regulations developed by the European Commission and the Regulation (EU) 2016/1628 require manufacturers to modify their manufacturing strategies, which may add to the total manufacturing costs.

Imposition of stringent laws and quality standards continues to influence the product and business strategy of excavator manufacturers.

Focus on Improving Performance Features: A Key Trend in the Excavator Market

As excavators are cost-sensitive, their performance characteristics, efficiency, and flexibility make the biggest impact on purchasing decisions of customers. 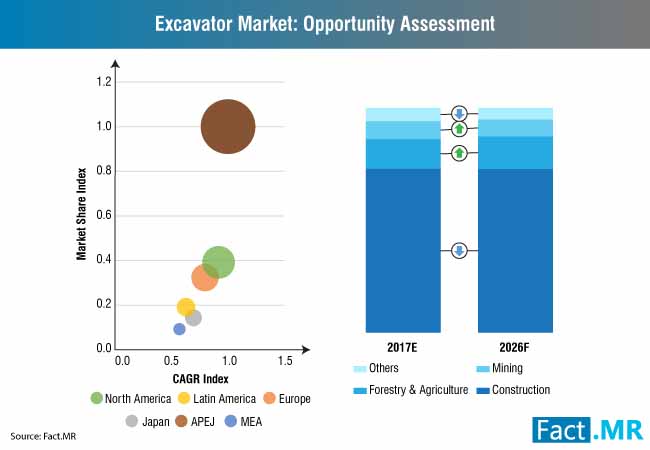 Apart from efficiency-related features of excavators, operators’ safety and environmental compatibility are being focused on by most manufacturers and vendors in the excavator market.

By using next-generation technologies, excavator manufacturers are offering features that can guide the operator about slope and depth to grade and preventing excavator parts from moving out of set points defined by the operator.

Thereby, reducing maintenance and operational costs, along with improving operator’s comfort and safety are likely to be the priority for player in the excavator market in the upcoming years.

The high cost of excavators makes them out of reach many small- or medium-scale end-users.

Thereby, a majority of end-users are more inclined towards renting excavators, which not only mitigates the expenses associated with buying a new equipment, but also reduces repair and maintenance costs.

Leading manufacturers in the excavator market are entering the rental business to reap the long-term benefits of renting excavators to an increasing number of end-users.

Most customers from a vast range of end-user industries prefer renting excavators on the basis of projects in order to limit their expenses on equipment renting and labor charges.

An excavator is a type of heavy equipment used in the construction industry to excavate the soil or for on a construction site.

Excavators are also used in other industrial sectors such as agriculture & forestry, and mining.

A common design of excavators consists of a bucket, a boom, cab or house, and a dipper, and the whole machine usually works on hydraulic forces.

Based on length of boom, size of bucket, and operational speed, excavators can be divided into different types such as mini or compact, medium, standard, and heavy excavators.

Other types of excavators that are commonly used in various industrial applications are crawler excavators, long reach excavators, dragline excavators, and suction excavators.

The Fact.MR report on excavator market is a holistic analysis of all-encompassing market dynamics, which elucidates information about growth of the excavator market during the period 2017-2026.

The information featured in the excavator market is obtained by conductive a thorough research on macro and microeconomic factors that are instrumental in shaping the excavators market throughout the forecast period.

The report also includes minute details about the competitive environment in the excavator market during the assessment period.

To provide detailed information about development of the excavator market, the market is divided into five segments in the Fact.MR report.

Readers can find in-depth analysis of each segment of the excavator market, which can ultimately help market players to modify or alter their business strategies for the coming future. 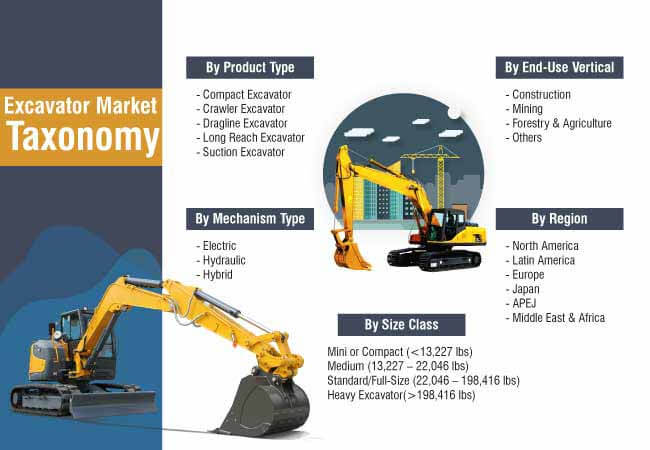 The report also answers important questions about the development of the excavator market, which can help market players to plan their critical business decisions appropriately in the foreseeable future.

Some of the questions about the excavator market answered in the Fact.MR report include

A unique and robust market research methodology is followed by analysts at Fact.MR to reach the exclusive information on excavator market growth that is featured in this report.

Analysts at Fact.MR follow a demand-side approach to estimate the future demand, sales, and supply of excavators across the globe.

The forecasting methodology followed by Fact.MR analysts finds its base in primary research and secondary research methods.

On interviewing market leaders, industry experts, researchers, governmental organizations, and stakeholders in the excavators market, analysts can reach certain qualitative and quantitative conclusions about growth of the excavator market.

On following a combination of primary and secondary research methods, analysts can ensure the maximum accuracy and reliability of the data and information included in the Fact.MR report on excavator market.

Some of the key players in global market are Caterpillar Inc. ,Deere & Co. ,Hitachi Ltd. ,KUBOTA Corporation ,CNH Industrial N.V. and many more.

The Global Market For Excavator Is Anticipated To Grow At A Value CAGR Of 3.2% During The Forecast Period.