Newly-released data by Fact.MR reveals that the global glow stick market is currently valued at US$ 134.8 million and is projected to reach US$ 189.2 million by 2032, expanding at 3.4% CAGR over the decade.

Individual/recreational buyers/hobbyists account for a dominant market share of 64.3% as far as the global demand for glow sticks is concerned.

Based on in-depth research and analysis by Fact.MR, a market research and competitive intelligence provider, the market for glow sticks expanded at a CAGR of 2.1% during the last four years.

With rising awareness regarding the use of renewable and environment-friendly products, demand for battery-powered or reusable glow sticks has amplified. Seeking this as an opportunity, major market players such as Nyoka Design Labs are investing in R&D to provide customizable, compostable, and non-toxic glow sticks powered with bioluminescence, which last longer and does not require electric-power sources for charging.

With the introduction of innovation and sustainability in the glow sticks, their application across various domains such as the entertainment industry, construction industry, and defense sector is expected to rise over the coming years. Furthermore, with advancements and innovation, introduction of reusable glow sticks will not only lure potential customers but also provide a renewable and green solution, driving glow stick sales across the world. 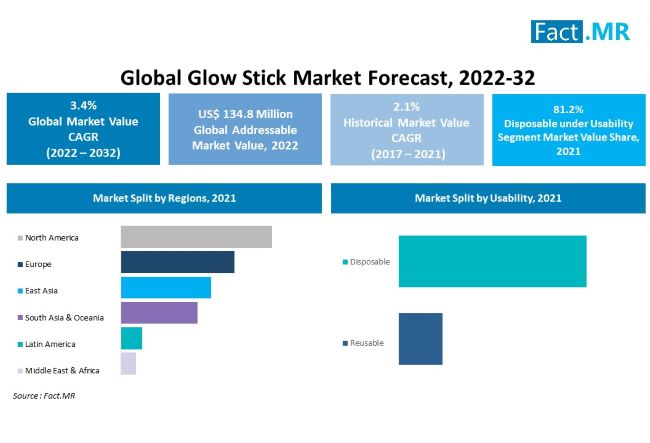 What are the Market Factors Driving Demand for Glow Sticks?

Glow sticks are used for signaling purposes to train drivers, for military purposes, and other applications. In addition, they are used by road construction workers to ensure their safety from regular traffic. The use of glow sticks by scuba divers helps them explore deep waters and also find new routes.

Glow sticks are integrated with firecrackers that provide an appropriate safety measure and save users from associated injury or burn. Later, these glow sticks can be converted into bracelets.

Social media enthusiasts use glowing sticks for effects and entertainment purposes. Numerous people, especially the young, opt for glow sticks either under the influence of social media influencers or for decoration purposes and lighting effects.

Major market players are adopting e-Commerce or online sales as the new platform to reach their potential customers and showcase their digital shelves.

Attributed to the aforementioned factors, the glow stick market is projected to grow 1.4X by the end of 2032.

Rising awareness and environmental concerns coupled with the ban of single-use plastics (SUPs) across economies will challenge market growth to some extent. As glow sticks are either made up of SUP or silicone, a derivative of plastic, government regulations on plastic and the ban on SUPs will impact the market over the long term.

This will push for the adoption of reusable and green materials for glow stick production. Demand for bioluminescent glow sticks is emerging and can offer immense growth opportunities for long-term growth for glow stick manufacturers.

Why is the U.S. a Prominent Demand Generator for Glow Sticks?

In the North American region, the U.S. dominates the market, followed by Canada. Market growth in the U.S. is attributed to the increasing adoption of glow sticks for safety and security purposes. Also, major players operating in the market have a prominent presence in the U.S., and to enhance their sales growth, they are adopting various go-to strategies such as product launches.

Additionally, the application of glow sticks in defense will expose it to various growth opportunities as the U.S. is investing highly in its military.

The United States glow stick market holds 86.3% share in the market of North America and is projected to expand at a CAGR of 3% through 2032.

How is the Market for Glow Sticks Faring in China?

In East Asia, countries such as China, Japan, and South Korea will majorly drive market growth. Industry growth in China is projected to be strong over the coming years due to the increasing demand for glow sticks from the entertainment industry and social media enthusiasts.

Additionally, China has the most social media users, and different related activities making use of glow sticks will lead to higher demand. China’s glow stick market holds 44.5% share in the East Asia market and is projected to expand at a CAGR of 5.3% during the forecast years.

Which Usability Factor of Glow Sticks Will Account for High Revenue Generations?

Which Factors Contribute to Emerging Demand for Bioluminescent Glow Sticks?

To enhance their portfolios in the fragmented and highly competitive market, market players are adopting innovative product launches as a key growth strategy. In addition, business expansion is also a preferred strategy for market players to enhance their global market position by increasing distributor networks, adopting online sales channels, and capacity expansion.

What is the current valuation of the glow stick industry?

At present, the global glow stick market is pegged at US$ 134.8 million.

At what CAGR is the glow stick market poised to grow?

Glow stick utilization across the world is anticipated to increase at 3.4% CAGR from 2022 to 2032.

How did the glow stick market fare over the past four years?

Who are the leading glow stick manufacturers?

Which type of glow stick will see heightened demand growth?

Bioluminescent glow stick sales are projected to rise at 3.9% CAGR through 2032.

What is the outlook of the North America glow stick market?

North America is estimated to hold 32.3% share of the global glow stick market by 2032.