Adoption of outboard engines in recreational activities account for more than 1/4th market share by the end of 2022.

The category of high-horsepower marine outboard engines is on fire owing to the augmenting demand for heavier and larger boats. Growing sales of boats that require high-power engines are forecasted to drive the market for the marine outboard engine in the future. Therefore, the players are focusing on the introduction of engines with higher power.

From 2017 to 2021, the global market for marine outboard engine registered a CAGR of 2.3%. Fact.MR, a market research and competitive intelligence provider, reveals that the market will exhibit growth at 2.8% CAGR between 2022 and 2032. 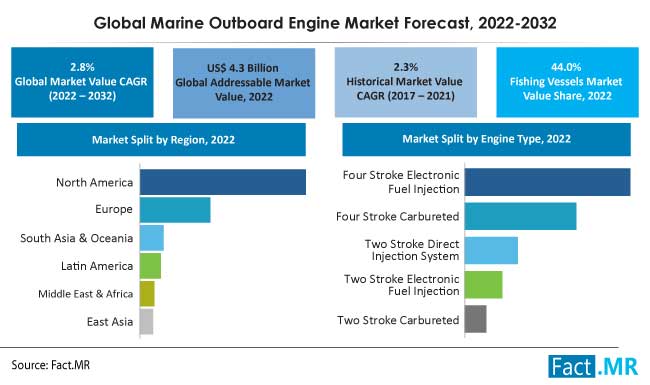 Market share analysis of marine outboard engine based on engine type and region is provided in the above image. Under the engine type segment, the Four Stroke Electronic Fuel Injection sub-segment dominates with 42.7% market share in 2022.

Burgeoning demand for cargo shipping has led to an increase in the demand for ships, boats, barges, industrial workboats, and others to be used as a mode of transportation.

All the different kinds of cargo ships, boats, workboats, bulk carriers, and reefer vessels are effectively used for the transportation of heavy goods such as oil and gas, industrial goods, and others. Growing infrastructure activities in the waterways are increasing the demand for outboard engines.

No industry in the world can grow steadily without the utilization of technology. Shipbuilding is also extensively using current technologies and is progressing at a faster rate. The usage of propulsion systems that have power differences will always be significant, but the improvements in hybrid technology and regulations are driving toward more sustainable alternatives.

The production of innovative engines that have high power and are also lightweight are gain hold in the market. Offering the engines in different horsepower’s attract customers from various end-use sectors to use the engines. Effective fuel distribution and offering high speed can be some of the technological advancements that can boost the sales of marine outboard engines.

What Do Marine Outboard Engine Manufacturers Need to Watch Out for?

“The changing fuel requirements may limit the market growth of conventional outboard engines.”

Initially, ethanol was used as the fuel for the outboard engines. The boats that used this type of engine have sometimes proved incompetent due to the corrosive effects of ethanol.

Later on, it was made mandatory to use ethanol only below 10% as a fuel with a mixture of oils and gases. The technological advancements in this sector have now made possible the usage of electric marine outboard engines. Therefore, this has hampered the market for conventional engines. The changing rules and regulations as per the rising concerns for the environment can limit the market growth of conventional engines.

The sudden outbreak of diseases or other pandemic situations affects the entire world and all sectors. This might lead to a pause in all the production activities concerned with the marine industry as well. For instance, eminent U.S. boat manufacturers Regal Boats, Viking Yachts, Yamaha Outboard, and Brunswick Corporation, completely halted production within the country in March 2020. The manufacturers of marine outboard engines may have similar threats and hence they have be prepared for the same.

The Japan market for marine outboard engine will expand at a strong rate of 2.5% CAGR over the forecast period and reach a valuation of US$ 64.1 million in 2032. Japan is among the top countries in the shipping and maritime industries. The country has a production of about 20-25% of the total global trading vessels. Its total dead-weight tonnage is approximately 233 million while its global carrying capacity is almost 12%.

Nippon Yusen Kabushiki Kaisha is the leading company in Japan which has assets worth US$ 9.6 billion approximately in March 2021. Owing to all the lucrative opportunities offered by the shipping industry in the country the market for marine outboard engines will have exponential growth.

Why is the Greece Marine Outboard Engine Market Expected to Be Highly Lucrative?

Greece leads the shipping industry world for a long. It is the oldest occupation of the Greeks from ancient times and also a key industry for revenue generation. The Greek ship-owners have around 5,414 ships by the end of 2021 which contributes nearly 21% of the global capacity.

59% of the Europe-controlled fleet is managed by the Greek-owned merchant fleet and is used for the transport of cargo in different countries. As this country retains the crown of the world’s leading maritime force, the market for outboard engines will surely rise high and provide high revenue generation for the manufacturers.

A fishing vessel is a ship/boat used to catch fish inside the lake or river and also sea. Various kinds of vessels are used in commercial, recreational, and artisanal fishing. A larger fishing vessel is known as a fishing trawler and it conducts the activities of pulling or dragging the trawls in the sea.

China is the largest producer of fish. It has the highest position in the net live fish market trade at a net export value of US$ 406 million in 2020. In 2021, the country has a fish production of 58.8 million metric tons approximately which is around one-third of the global fish production.

Similarly, many other developing countries such as India, Indonesia, Peru, and others that are in the fishing industry have higher utilization of fishing vessels. Majority of the fishing vessels require efficient marine outboard engines for the smooth functioning of the vessels. The market is poised to grow at a constant CAGR and achieve a valuation of US $ 1,924.8 million in 2022.

Why Is There Is Big Opportunity Four Strokes Engines in Marine Outboard Engine Market?

One of the main reasons two-stroke engines are highly used is that they can burn low-grade fuels also. This reduces the overall cost of running the ships as better-grade fuels have higher costs. These engines have a high power-to-weight ratio and hence can carry more amount of cargo on the ships.

The sales of the new four-stroke engines are now rising. These engines are mostly used for the large merchant vessels that are used for traveling on the ocean. The four stroke engine market will have significant growth in the long run and capture a market share of 71.4% by the end of 2022.

Focus on the expansion of its business through increasing its sales offices & distribution centers to enhance its presence across the globe. Key manufacturers are found to be involved in material optimization, technological advancement, and productivity to cater to a wide customer base worldwide.

The global marine outboard engine market is expected to be valued at US$ 4,370.5 million.

Worldwide demand for marine outboard engine is anticipated to reach US$ 5,735.1 million by 2032-end.

Fishing vessels accounts for 44.0% share of the global market.

*84 figures and 140 tables includes by FactMR